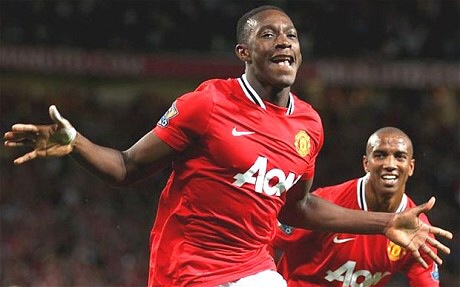 Over the last ten days hundreds of column inches have been devoted to opinion regarding Manchester United’s deadline day sale of Danny Welbeck to Arsenal and the beginning of what many have concluded is an end to a club policy of giving opportunities to the graduates of the club’s academy. Giving youth a chance is a common thread that has run throughout United’s history, often with great success. Most recently, of course, the fabled Class of ’92 drove Sir Alex’s side to a period of fairy-tale dominance. As I wrote in detail last week, there are many flaws in the argument that the Welbeck departure signifies that this is at an end and I need not detail them again here. As three (including Tom Cleverley and Tom Lawrence) leave a raft of other youth products have edged into the first-team squad picture: Tyler Blackett, James Wilson and Reece James remain in focus, whilst Michael Keane, Saidy Janko, Nick Powell and Andreas Perreira have recently been given opportunities to impress their manager. Opportunities to impress have been forthcoming, even if the exposure of some to competitive fixtures has been necessitated by the club’s perpetual injury crisis and slow transfer window. Van Gaal has demonstrated throughout his managerial career a willingness to play young players, offering them a chance to prove that they are of the required standard. He himself states that age is just a number and that a sixteen-year-old can be more mature as a player than another in their thirties. It is about the talent and personality of the individual, not games under their belt.

Danny Welbeck was always a nearly-man for Manchester United. The local lad scoring goals for his boyhood team is as romantic an image as is possible in modern-day football and fans of the club revelled in his early promise and later introduction to the first-team squad following a successful season-long loan at Sunderland. He progressed from promising talent to England centre-forward, but without ever truly establishing himself as the long-term first-choice striker at Old Trafford. In the 2011/12 season Welbeck scored 12 goals in 39 appearances as Sir Alex gave him his chance as a starter alongside Wayne Rooney. It was a good but not explosive introduction. The following summer the manager, stung by the loss of the league title in the final seconds of the season to Manchester City, prised Robin Van Persie from Arsenal and Welbeck lost his regular place in the team, a position which he was never able to fully recover. He thus became the ideal squad man, offering an alternative option up front or in a wide position when pace and work-rate were desired or one of the first-choice forwards were injured or suspended. Despite important goals in big games against Real Madrid, Arsenal and City there has always been the feeling that he is good, but not quite good enough for a club of the stature of United. His finishing remained a problem, the one area of his game preventing him from being top-class. At the age of 23, with his place in the England team under threat and with a desire to start every week in his preferred position, the player expressed a wish to move on and Louis Van Gaal, unable to see enough in Welbeck to promise him significant game time, was happy to let him leave for Arsenal on deadline day.

At United Welbeck was something of a cult figure. The fans desperately wanted him to explode and become the player that they hoped he could be, but it never happened. The player was very good, but never quite as good as many hoped he could be or as bad as others suggested. He was also the most promising player to have emerged from the club’s youth academy since Jonny Evans in the 2007/08 season, another who for various reasons has become a nearly-man, unable to remain fit long enough or to play consistently at a high enough standard to be considered an automatic, top-class option at centre back. If we go further back, towards that exceptional Class of ’92, then home-grown players who have established themselves in the first-team squad include Darren Fletcher, John O’Shea and Wes Brown. More recently Tom Cleverley looked like a player who could help to fill United’s midfield void, before falling away and being discarded by Van Gaal. What is noticeable is that in the two decades since that once-in-a-lifetime group, the club’s academy has not produced a single top-class footballer, a player who would be welcomed at nearly any club in Europe. We can point to imported youngsters such as Pique, Pogba and Januzaj, but two of those trio, who joined in their mid-teens, left the club before achieving their potential. Januzaj is supremely gifted, but a work in progress. Perhaps the sale of Welbeck, rather than being a sign that a commitment to youth is being abandoned, is an indictment on the standard of player being produced by the club. He is best of the recent bunch, but not quite good enough for a club that aspires to be the best in the world.

Producing players of the very highest class through a club’s academy system is no easy task. So many hugely gifted youngsters lose their way, either through injury, lack of physical development or poor focus. Competition for the best young talents is fierce and so it takes a combination of factors to come together to produce a player with sufficient inability to stay afloat at an elite club. But twenty years is too long. The United academy and reserves/u-21s have regularly won titles and churn out young footballers of Championship standard and above by the bucket load. There are clearly many things which are being done right. But what is an academy system for if not to provide players for the first-team? We know that there are serious problems with youth development in England, but for United, with a huge budget and modern, high-class facilities the excuses simply don’t wash, just as they don’t at Chelsea or Manchester City. The difference between those two nouveau-riche clubs is that the best kids below the first-team have mostly (Paul Pogba disagrees) been given a chance when it has been merited. It is of note that not one British former United trainee in the last twenty years has gone on to develop into an elite-level player elsewhere.

It is clear that United continue to produce players with good talent levels, well prepared for life as professional footballers at a very decent standard. But there is a very clear disconnect between the level of player required by the first-team and the level of those graduating from youth levels. Danny Welbeck inadvertently exposes this, the best of the bunch in recent years and yet not quite good enough. Clubs of a similar stature such as Barcelona, Bayern Munich and Real Madrid continue to produce players on a regular basis who are talented enough to earn a first team berth or, in the case of the latter, move on and excel elsewhere. Despite a squad building policy most certainly based on the regular purchase of ‘Galacticos’, the list of currently active players who graduated from ‘La Fabrica’ include current full-back Dani Carvajal, Alvaro Arbeloa, Borja Valero, Alvaro Morata, Javi Garcia, Jese Rodriguez, Juan Mata, Juanfran and Roberto Soldado. The earliest graduate from this list is Arbeloa, who left Real in 2006. Between then and the present only Welbeck and Evans could be argued to not look out of place in such company. The extensive lists of home-grown talent schooled at Bayern or Barca do not need to be written down for you, but it is instructive that even at a club such as Real, at which progression from youth team to first team is almost impossible, the level of player being produced is of a very high standard. Something is wrong at United and, in fairness, in England, with the production and development of top-level footballers. At Old Trafford the academy is, to this point, failing to achieve its principle purpose, to feed the senior team with home-grown talent. Perhaps it is too focused on producing rounded professionals or the scouting and recruitment has been inadequate. There is no doubt that the jump from under-21 league football to the first team is too large and clubs in countries such as Spain are advantaged by the B-team system, but something needs to change.

The story here isn’t, therefore, that the sale of Welbeck was a sign of an end to a policy of trusting in and giving a chance to youth. Instead, it is a signal that the standard of player being produced by United is not consistently good enough. Perhaps James Wilson, who has replaced Welbeck, can make the jump to first team regular over the next few years. He clearly has immense talent, but watching him at Under-21 level it has noticeable how far ahead of any of his teammates he is in terms of technique and development. He stands out, as Welbeck and Januzaj did at his age. It is unrealistic to ever expect a group of world-class talents such as the Class of ’92 to ever develop together ever again. It was a remarkable, unprecedented occurrence. But since that group graduated to the first-team two decades ago United have failed to produce a single player in the same class Beckham, Giggs, Scholes or Gary Neville. It’s not that the club are not giving young players the chance to demonstrate whether or not they can cut it at Old Trafford, they are simply not producing enough prospects good enough to take that chance long term. Something needs to change, both in age-group and grassroots football nationwide and with the scouting and development of young players at United.