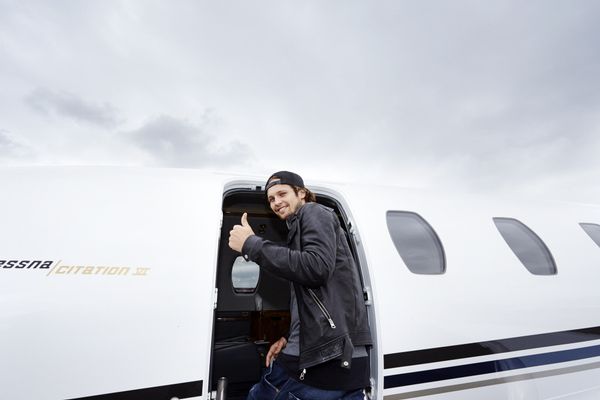 Falcao. The Columbian tiger ensnared so to add bite to Manchester United’s toothless attack; an A-list striker who looks like he walks red carpets when he’s not ripping defences apart and the sole reason why at 11am Tuesday morning I was practically asleep at my desk.

While United fans were refreshing Twitter at a rate akin to a teenager hunting down Hunger Games hottie Jennifer Lawrence’s artistic mishaps late Monday night, wasn’t it hilarious seeing all the City and Liverpool fans obsess over how much he was costing.

‘It’s ridiculous how much you’re spending on him’.

But according to you last summer we had no money.

Why do you care so much?

He may not be the world class centre-half we need or the powerhouse midfielder we crave. Right now though, do you honestly care? It’s Falcao.

But while club shop staff start frantically tearing all the ‘Fs’ from all those Fellaini shirts, it’s our other piece of under the radar deadline day business that I believe could prove to be just as important.

When the Daley Blind rumours surfaced following the World Cup I wasn’t particularly impressed. I just didn’t see it (pun definitely intended). The more I’ve read on the versatile Dutchman and the more I’ve seen of him (granted, I could be made to look like a top footballer on YouTube), the more I get it.

He has been schooled in the ways of Ajax Football Club since the age of seven. He finished the World Cup with three assists, one behind table-topper Jaun Cuadrado. His girlfriend’s called Candy Rae-Fleur. The lad obviously has something about him.

Blind may have started out his footballing life as a left back and yes, he can play in a back three but surely the signings of Rojo and Shaw mean he is seen as one of the pieces to a midfield jigsaw that has been baffling United managers for a few seasons now.

He won Dutch Player of the Year last season playing predominantly as a holding midfielder. His range of passing and his calmness on the ball should bring a different dimension to what at times has become a stagnant midfield; the catalyst that hopefully enables the attacking might of Herrera, Mata, Di Maria, Falcao, Rooney, and Van Persie (any excuse to list those names) to flourish.

Daley Blind is blessed with a footballing brain, tactically versatile, should have no problem adopting Van Gaal’s philosophy and will add strength in depth across a variety of positions. As his former manager Ronald De Boer said: “Daley Blind is a team player who makes others play better.”

If the 24-year-old Dutchman helps bring the best out of Herrera, Mata, Di Maria, Falcao, Rooney, and Van Persie (not even sorry), then he could well be the best bit of business we have done in a while.