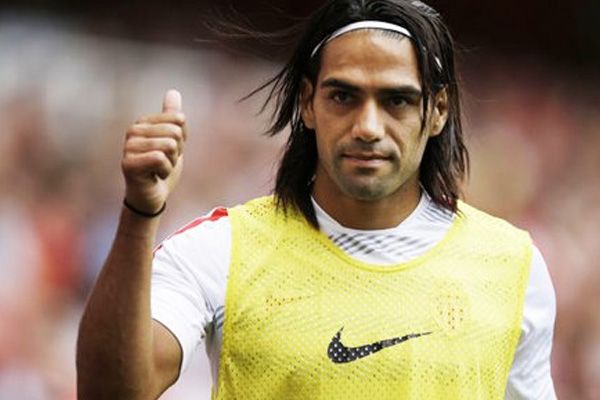 When Colombian journalists such as Saris Bello initially broke the news late on Sunday night UK time that Manchester United had agreed terms to acquire Falcao from AS Monaco, I have to confess that I was skeptical to say the least. My assumption was that Falcao’s agent, the infamous Portuguese “super-agent” Jorge Mendes, had briefed selected journalists in a last-ditch attempt to force the hand of long-term admirers such as Real Madrid or Manchester City. Less than 48 hours, with Falcao pictured wearing the famous red jersey of Manchester United, I have to admit that I was wrong – and I’ve never been more pleased to have been so fallible.

That being said, Bello and the other Colombian journalists who first broke the story did appear to have gotten one detail incorrect. Bello reported that Falcao would be purchased by Manchester United outright for 65 million euros, and signed to a four year deal. It has now emerged that United will be loaning Falcao from Monaco for a year, with an option to purchase the prolific striker at the end of the loan term. It is unclear exactly what the quantum of either the loan fee payable by the reds to Monaco is, or the purchase option exercise price, are. It is also unclear as to whether the club will be compelled to purchase Falcao after one year, or whether the club can choose not to exercise the option.

(It is notable in passing that MUFC has reported the purchase prices of both Daley Blind and Marcos Rojo on the club website – one wonders whether it was the club’s decision to be so circumspect about the terms for the Falcao loan, or whether there was an agreement between MUFC and Monaco to keep the details under wraps. (Also, if it was entirely the club’s decision to not disclose the loan fee, what would the rationale for that be?)
In commenting on the Falcao deal on Twitter, noted transfer purchase deposit expert Guillem Balague suggested that the deal had been structured as a loan “for FFP [ie Financial Fair Play] reasons”. This tweet was picked up and through the process of “social media Chinese whispers” ended up being attributed, incorrectly, to Falcao’s agent.
While it’s impossible to be certain given that the terms of the deal have not been confirmed by Manchester United, I have been trying to work out whether there is any clear FFP benefit to either United or Monaco from structuring the deal as a “loan plus option” versus an outright sale. Let’s use some reported figures (noting as a caveat that different papers are reporting different figures!) and examine the financial effects for both clubs under each scenario.

Monaco reportedly purchased Falcao for 60 million euros from Atletico Madrid and put him on a 5-year deal. Assuming this is correct, he would currently be on Monaco’s books at a value of 48 million euros, having been subject one year’s worth of amortisation of 12 million euros.

As Monaco has instead loaned Falcao to Manchester United, Monaco will recognise the 7.5 million euros loan fee as income, but will still need to amortise Falcao’s registration value by another 12 million euros, hence will potentially make a net loss for accounts purposes of 4.5 million euros if United don’t exercise the purchase option.

Taking this into account, there’s no FFP benefit for Monaco in structuring this deal as “loan plus option” versus an outright sale. At best, they’ll be no worse off. At worst, they’ll actually be worse off by about 4.5 million euros.

(Just as a rider to the calculations above, they are obviously based on the assumption that the purchase option is “true” option ie Manchester United can choose to not exercise the option and return Falcao to Monaco after one year with no financial penalty. If the option is not really an option, such that United are in fact compelled to purchase Falcao at the end of one season, the analysis would change as the reds would be treated for accounting purposes as having purchased Falcao irrespective of the form of the transaction. In other words, Monaco would just adopt the same treatment as if they’d sold Falcao outright to United and book an immediate profit.)

Manchester United’s position is basically the reverse of Monaco’s. In the current loan scenario, United will expense the loan fee of about 7.5 million euros and will have no amortisation charge as Falcao would remain on Monaco’s balance sheet during the period of the loan.

If the club does not exercise the purchase option and returns Falcao to Monaco, there would be no further impact to Manchester United’s accounts.

If Manchester United does exercise the purchase option, Falcao will need to be booked on United’s balance sheet at his assumed purchase price of 55 million euros and would be amortised over the term of his first contract as a United player (not counting his first season as a loaned player). here’s obviously no way of knowing what the contract term would be, but if we assume for comparison purposes that it would be 3 years (ie just to match a total 4 year deal versus the 4 year deal Bello was reporting) the annual amortisation would be about 18.3 million euros per year. However, this is entirely hypothetical.

By comparison had Manchester United purchased Falcao outright for 62.5 million euros and put him on a 4 year deal, the amortisation charge each year would be about 15.7 million euros a year for the 4 years.

Being generous to Balague, it could be argued that expensing 7.5 million euros in year 1 and 18.3 million euros in years 2 through 4 achieve a deferral for Manchester United’s accounts versus flat amortisation of 15.7 million euros each year for 4 years. I really hope though that the club’s executives aren’t so concerned about United’s FFP capacity that they’ve structured this deal in such a way as to achieve an 8 million euros benefit in year 1.

I’d prefer to believe that Manchester United vice-chairman Ed Woodward and manager Louis Van Gaal have chosen to loan Falcao in order to see how his knee holds up over a season and whether he can be effectively integrated into the squad, in which case the option can be exercised to purchase him. I see this as a very prudent and relatively low-risk way to acquire a potentially outstanding player.

As a final thought, it’s interesting to see that the FFP regulations appear to be taking effect in terms of curbing excessive spending by petrodollar-funded clubs like Paris Saint Germain and Manchester City. SG and City had reportedly been interested in signing Angel Di Maria and Falcao respectively, and probably would have done so had there been no constraints on their spending. However, as two of the clubs hardest hit by UEFA FFP sanctions, both clubs have had to think twice about whether they are prepared to flout the regulations. Neither club was therefore in a position to make bids for these world-class players, leaving the field clear for Manchester United.