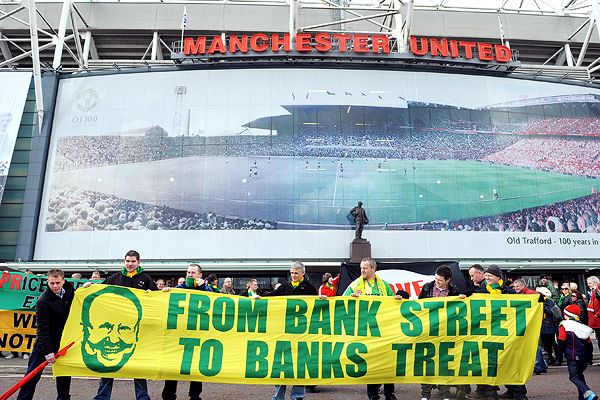 The emphatic and almost unbelievable splurge of money spent on United this year is completely out of character with the way that the club has ever been run. Despite acquiring a manager with a CV nearly as enviable as Sir Alex Ferguson’s, Louis van Gaal has sought to heavily invest in the club in a manner unparalleled during the Glazer’s tenure. They have bled the club, taking money without reinvesting, whilst other teams like Chelsea and City has benefited from bottomless pits of money. Now with a team heavily in need of reinforcements, the Glazers are spending a much higher amount than if they would have through consistent and regular investments. Whilst it is a relief to finally see the Glazers putting money into the club, United have signed luxury rather than necessary players due to chief executive Ed Woodward’s obsession with marquee signings.

Woodward is a businessman who knows little if anything about football, not a rare species in today’s footballing climate unfortunately. What has made his dealings this year even more startling though is his inability to learn from the mistakes from last year’s humiliating transfer window. He has failed to tie up deals early and has constantly talked a good game too eagerly. This year, his obsession with a marquee signing has been to the detriment of United’s progress.

Woodward would consider the extravagant signings of Angel Di Maria and Radamel Falcao as significant achievements. There are many who would agree with him. In Di Maria, we would have a player skilful and charismatic enough to merit the famous Number Seven shirt, (take note Antonio Valencia), and he would offer the pace and excitement that we so badly crave. Falcao is one of the most prolific strikes on the globe. But, there is no doubt that both men are luxury players who should be lower on a list of priorities of new signings.

For years now we have been crying out for a destructive midfield player. We do not have a tackler in the team and too often we are calved through the middle with the defence often taking the blame. Ander Herrera will not ease this issue and there will be a lot of pressure on Daley Blind to solve this, (if he plays in midfield). Destructive tacklers, such as Sami Khedira and Nigel de Jong, have been ignored. Every football fan would drool at a forward line of Rooney, Van Persie, Di Maria, Falcao, Mata and Januzaj but what is the point of having these players if they can’t get the ball. At Burnley, the uncomfortable three at the back nervously passed it sideways or back for a while only to then hoof it up aimlessly. If we wanted to spend big, we should have broke the bank (and ate some humble pie) by bringing back Paul Pogba to bridge the gap between defence and attack.

The most curious figure in these transfer dealings is van Gaal. He appears a strong-minded individual who makes all the decisions. He must surely have said that he wanted Luke Shaw and Ander Herrera but these are players that Moyes would have bought anyway and van Gaal is unlikely to have known either very well, (he certainly doesn’t appear to rate Shaw just yet). He always bemoans having too many forwards in the same position yet is adding another player there. Does Di Maria really have the discipline to track back as a wing-back, and if so, does that not curb his attacking threat? Would Falcao mean that Rooney drops to midfield or signal the end for possibly crocked Van Persie? It will be interesting to see if Van Gaal adapts his formation (probably to his preferred in the past 4-3-3) to accommodate more forward players or stubbornly sticks to the 3-5-2 that brought success in the World Cup but has struggled to work at Old Trafford so far.

Woodward wants to show-off. He foolishly exclaims that we can buy any player that we want, we can spend £70 million, we can even break the world record. He wants to show the world that even if we slumped last year, we can still compete with the ‘big boys’. In signing Di Maria, Woodward could boast that he beat PSG to a capture. Whilst it is fantastic that the Glazers are finally having to put their hands in their pockets for the first time in a decade, this kind of extravagant planning does not guarantee success and does not allow strong foundations to form in a club. We are going to get less players like van Persie who joined us for football reasons (the ‘little boy inside’) and more mercenaries that City and Chelsea pander to. The failure to qualify for Europe will not impact too much on attaining players because players are greedy. Di Maria is moving for money and money only, not because he has ‘always dreamed of playing for United’ or whatever he may have spouted out in the unveiling. It is exciting and thrilling to see him and Falcao in red but will they play with the heart and a will to win that money cannot buy? Van Gaal’s opinion that Danny Welbeck is surplus to requirements is saddening considering that he is a Mancunian who we have persevered with for years. Though frustrating in his finishing, no striker would give us any more effort in the squad.

The best thing about David Moyes’ atrocious season was that it highlighted how bereft United have been of investment since the Glazers have took over and how miraculous if was of Ferguson to carry on achieving despite such restrictions. Through Woodward they have had to spend huge amounts on Juan Mata and Angel Di Maria, amongst others. These are luxury players who, despite being obviously very good players, are not needed as much as a defensive midfielder and are instead symbols of a chief executive too obsessed with using marquee signings to boast about the club’s wealth.