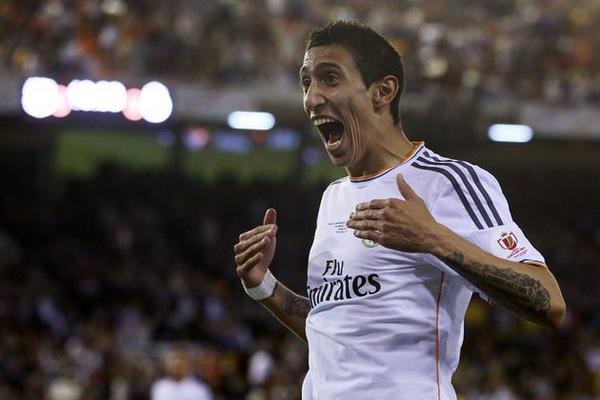 I scarcely still believe it, despite seeing him hold up the jersey, sit next to Ed and regurgitate the shit that United’s press officer asked him to say. But, despite everything my mind’s telling me to believe, Angel Di Maria has in fact signed for Manchester United. Conventional wisdom would tell you that this is impossible. There are a few reasons to this; firstly Di Maria can play centre-midfield and as we all know, United have been prohibited from signing decent centre-midfielders for about eight years. Secondly, there’s the fact that is a proven world class performer who’s played and sparkled at the highest level. Manchester United fans have seen much since the retirement of Alex Ferguson but we haven’t seen anything like this. It goes against the modus operandi of the club to sign a player, not just to appease the fans (alright, Juan), but to actually improve the squad.

As I’m sure you all know, Di Maria is a fairly tidy footballer. His technical ability and output has improved drastically during his time at Madrid (it wasn’t shabby beforehand either) and he has a certain aggression and drive that belies his fragile, impish and yes, even grotesque appearance. He’s not beautiful, or a hunk. Perhaps that’s why Florentino Perez felt comfortable selling him, especially when they have their latest Adonis, Gareth Bale, as well their new boy next door with that Hollywood smile, James Rodriguez. They did the same with their other previous imp, Mesut Ozil. His bug eyes symbolise his vision and awareness on the pitch but he could never truly compete with the lookers at Madrid. And so Perez’ ambition to make Madrid one big Colgate advertisement has led to United’s signing of Di Maria, and he will greatly improve us. People have spoken at great length about how he’s not the answer to all United’s problems. While I don’t want to sound like an ass, all I can say is, of course he’s not! What moron would think that an attacking midfielder, world class or not, could solve all of a deeply flawed side’s midfield and defensive problems? What these people are trying to say is that United need more, and of course they do.

This is a side that in the space of six months has allowed the defence to become the biggest weakness in a squad that hasn’t bought a quality centre-midfielder for eight years. When posed with the solution to strengthening the midfield, Ed Woodward by the looks of it thought, “Let’s make the defence worse!” There’s a twisted logic to it. By weakening the defence (by selling Rio, Pat and Vidic in the space of a few months) United make the midfield appear better relatively speaking. But what Ed didn’t bet on was just how shit our midfield is. It speaks volumes of this midfield’s commitment to mediocrity and underperformance that despite our defence suddenly looking like it’s never played football, it remains just as weak as ever. But this should not be a surprise in a club that has fostered and encouraged mediocrity for years. People may disagree with this point but it’s true. Any club that allows Roy Keane to leave and refuses to properly and effectively replace him at some point over the following years clearly doesn’t care too much. Any club that continues to allow Tom Cleverley and Anderson to retain squad numbers and even playing time clearly doesn’t strive towards the highest standards of its profession.

That is why the Di Maria signing (bet you didn’t think I’d find a way back to the point, eh?) is notable and necessary. it shows that perhaps, finally, Woodward and his fat twats upstairs are finally seeing that the club actually needs quality. Not just another player to sell jerseys (gracias Chicha) but someone whose very presence should lift the mood and increase the quality of what the squad is producing. There’s debate over whether van Gaal will put Di Maria as a wing back in his 3-5-2 formation, or change it according to the squad’s new strength, that strength being that we now have Di Maria. I know, you know and as a result van Gaal knows that Di Maria is too good a player to try to fit clumsily into a system that does not suit him. Van Gaal has always said that he tailors his playing style to the players available to him. With the addition of Di Maria into the squad, I expect him to do just that.

He showed at half-time during the Swansea match that he’s not embarrassed to switch things up if a change is needed, and in truth what embarrassment is to be taken from changing your style to fit in one of the world’s best players? None, that’s what. What would be embarrassing would be attempting to fit him into a system that doesn’t suit him, in a square hole, round piece sorta situation. For once, United can actually be truly happy with how a deal’s come off. Sure, we’re desperate, our transfer policy over the last few years has finally caught up with us and our vice-chairman considers it appropriate to brag about how rich we are and then leave it until the last moment to try to sign people. But the point about Di Maria’s signing being so unbelievable is that even if we weren’t in this situation, he would still be an incredible singing. This guy was the man of the match in the Champions League final last season, for goodness sake! Other than Juan Mata and Ander Herrera, this guy is on such a different level to our other midfielders that they shouldn’t even be allowed to be called professional footballers by comparison.

But most of all, the main reason why I scarcely believe this, despite all I’ve seen and read, is that this transfer is giving me hope. Hope, that most awful of feelings that can be the greatest gift and the worst curse at the same time. I felt it occasionally last season under Moyes. Our first game at Swansea, for example, produced the first of what I liked to call our “false dawns”. However, there were so many of these moments, where you’d allow yourself to become hopeful that things would change and become better before they reverted back to rubbish, that towards the end you knew it was all gonna fall on its arse and leave you feeling hollow and empty. Di Maria arriving has filled me with that hope again, and that’s a little scary. He’s filling me with hope that perhaps we may get the necessary business done in the next few days that we so desperately need. Even though, deep down, I know we probably won’t.

Then again, I might just be a pessimist. Things may turn out for the best after we sign Arturo Vidal and Daley Blind as well as others and I’ll be left feeling silly but ultimately delighted. But just like I still don’t think we’ll sign Van Persie or Mata, I find it all a little hard to believe.