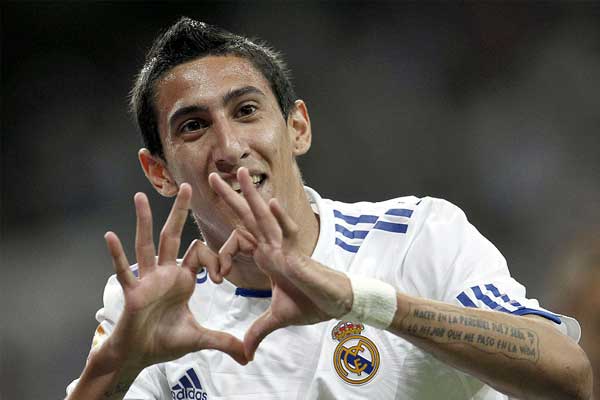 Over the last couple of days, Twitter has been going into over drive as speculation of a certain Argentine joining United reached boiling point. When Ancelotti had confirmed he was allowed to leave Real Madrid and subsequently left him out of the squad for the second leg of the Spanish Supercopa, it started off as simple optimism, as Reds far and wide refused to get carried away. He was probably on his way to PSG anyway and nobody wanted to look a fool. But, with the season starting so abysmally with that painstaking defeat to Swansea, you can’t be blamed for dreaming about it. Then came the quotes, something he had said as a teenager of his desperate desire to one day join Manchester United.

Twitter absolutely exploded. Angel di Maria was on his to Manchester.

I think it’s fair to say that United have made a malodorous start to their league campaign. It’s an understatement to be honest, after yesterday’s dismal performance against Sunderland, where we picked up our first point of the season from a possible five. Not exactly what everybody was expecting given the near flawless pre-season campaign coupled with a relatively kind draw of early fixtures.

For all the attacking prowess United have in Rooney, van Persie, Juan Mata and Januzaj, the midfield has been the hottest topic of choice for God knows how long. The performance against Sunderland exposed United as an ordinary side with players well below the standards of the club – Cleverley, Valencia, Smalling and Young being the main culprits – and highlighted the desperate need for additions and reinforcements to that area – especially with the unfortunate list of injuries that have accumulated over the past seven days. So, you begin to wonder, is Di Maria really the answer to our problems? The answer is yes.

Ever since the departure of Cristiano Ronaldo, United have lacked real star quality, someone who can perform on the biggest of stages with confidence and thrive, adding the highest quality attacking impetus whilst providing stimulation to the rest of his team mates to aspire to be best. Di Maria has quality, pace and creativity in great quantity. He was integral in Madrid’s Champions League campaign last season, being voted man of the match in the final in Lisbon – after providing Gareth Bale with the assist to give Real the lead in extra-time. I’d even go as far as saying that after Ronaldo, he was the second most influential player in Real Madrid’s team last season. During the World Cup, he was Argentina’s best player by a country mile.

After the arrival of Gareth Bale, he was required to adapt himself to the team by playing on the left side of a three man central midfield and he thrived. If you look back to the majority of Madrid’s league games last season you’ll see a skinny Argentinian floating past defenders, with the ball firmly glued to his feet with Ronaldo, Benzema and Bale frantically trying to keep up with him, offering options. He finished the season with the best assists record in any of Europe’s top five leagues, with 17, and a further five in the Champions League – something which is sure to excite Rooney and Van Persie.

Furthermore, it’s his versatility across the midfield and the front line and his accurate left foot that also makes him such an attractive and worthwhile proposition. He’s shown that he is more than adept at playing on either wing as well as behind the main striker and last season he demonstrated that he was more than capable of playing in a deeper central position that wasn’t necessarily his strongest. Yes, Van Gaal will have to tweak his tactics in order to get the best out of him as it would be a crying shame to have him play as a wing-back but you’ve got to wonder, if United are willing to break the British transfer fee record, there must be a reason for it. A bigger picture of some sorts.

Part of that bigger picture is a massive need for a combative midfielder with good distribution and the ability to control the tempo of a game, and an experienced defender, too. United have recently been linked heavily with Nigel De Jong and Daley Blind and Van Gaal cheekily name dropping Vidal after yesterday’s draw with Sunderland sent Twitter into another mini frenzy.

For now, let’s forget about speculation and hope that the remainder of this deal is done without any interruptions because it’s going to take many miracles for United to contend for a top four place or even mount a title challenge and the chances of either of those happening are going to be increased dramatically with Angel on our side, no matter the cost.