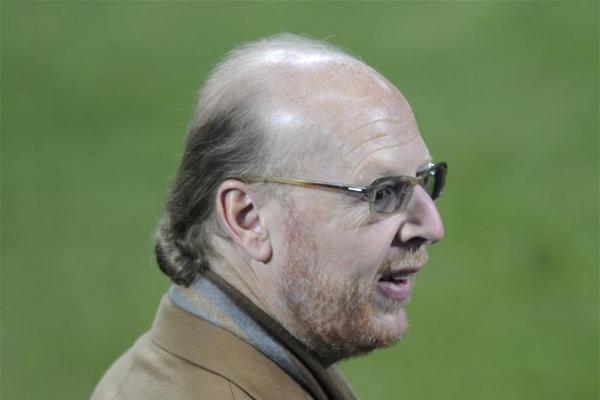 Clearly shaken by the indiscriminate use of militant hashtags against them earlier this week the Glazers have told the press they are going nowhere for the next 5 years unless we can find a way to trick them into taking a family tour of the Chernobyl reactors or doing a sponsored swim in a pool filled with liquid Ebola. For 95% of the hashtaggers it doesn’t matter anyway, a couple of signings before the end of August and all will be forgotten but that isn’t it, these cancerous parasites may well have destroyed the club in 5 years’ time.

Where might the club be by the time the hideous impetigo carriers leave?

After #glazersout became a global trend on Twitter the boys got scared and Avram sold his collection of Antique Thai lady boys to Roman Abramovich to part fund the deal for Rojo, but of course that alone was never going to be enough. Woodward did make 2 signings on deadline day but Lee Cattermole and Richard Dunne were never going to appease LVG and on 1st September he walked out on United.

Sam rolled his sleeve up (he lost his arm in an training ground tussle with Rojo) and worked the market in a way only Sam can selling Mata, Kagawa and Welbeck and bringing in Nolan, Snodgrass and Crouch thus pioneering a new and innovative way of playing for Manchester United, one that Moyes had ‘tried’ to achieve, HOOFBALL. Prioritising the league meant an early COC exit to Luton town but worse was to come in the FA Cup, United being eliminated by St Ives town in the 3rd round in a blood and thunder tie in Cambridgeshire which prompted a double hashtag of #glazersout and #allardycedieofleprosy. Despite Fellaini scoring 37 league goals the season ended in a mid-table finish and with The Glazers unable to provide any funds for the summer Big Sam walked out and took up a director of midwifery position at Redditch district hospital.

With sponsors abandoning the club on a daily basis poor old Ed Woodward lost his job and was replaced by a roll of sellotape. The mangers role was filled by the returning David Moyes who had just led an unfancied Keflavik to the Icelandic Premier League. Promotion remained the objective but Moyes insisted on selling Rooney, Rojo, Rafael as part of his new superstitious approach and the gaps in the squad were filled with members of the public recruited at a bingo hall in Hyde. A brave cup run ended in the 4th round at the hands of Scarborough and despite spending nearly £45,000 in the January transfer window the club were relegated to the English 1st division after a 5-2 loss at Sheffield Wednesday, on a Tuesday. Which was confusing.

The club started the new season without a kit manufacturer or sponsor and it needed Phil Jones to show Andrew Flintoff a weekend of corporate entertainment to get Jacamo to commit to the kit and anders Lindegaard persuaded Anusol to stump up for the shirt sponsorship. With barely enough income to cover the debt repayments the ground naming rights were auctioned off in August and the FA were delighted to rewrite all the home games into the fixture list at the new “Erectile dysfunction stadium”. The season went along in that fashion, the home games a bit like trying to thumb in a semi as the team and the away games displayed a phenomenal impotence in front of goal as Fellaini struggled with an awful disciplinary record. In January the Glazers refinanced the remaining £200m debt on a 150yr deal attached to the club meaning in 2168 when the club would finally be debt free they would have spent £4bn in interest repayments. The team finished 14th and made the semi-finals of the JPT losing narrowly to Morecambe in a tough contest that saw Fellaini sent off for trying to force his thumb up the anus of the opposition goalkeeper during a particularly fruity jostle in the goalmouth.

Moyes left during the summer to join FC Bayern as head coach and replacing him was one Alexander Chapman Ferguson now nearly completely blind and confined to his sofa but still a staunch supporter of the Glazer family. The club made bold moves in the summer window, recruiting former favourite Dimitar Berbatov from Airbus of the Welsh league for just over £9,000. Berbatov made an instant impact with the fans during August despite the statisticians reported he failed to break into a run at any point in the first 4 league games. The ‘Erectile dysfunction’ stadium was sold in an attempt to meet the debt repayment on 21st November to Wimpy homes and on 22nd November the club were served notice to vacate the ground within 3 months. In an error strewn process the Glazers had left club secretary Paul Scholes to manage the sale and he had failed to put in any provision for playing home games. Manchester united agreed a ground share with Macclesfield town for the remainder of the season after agreeing to sell them Phil Jones and Chris Smalling for an undisclosed fee though to be in the region of a set of new shirts and a second hand minibus. The team finished the season one point off the relegation zone and Ferguson retired again, handing over the reins to Michael Owen.

Owen worked his little black book of contacts hard but due to FA regulations his attempts to sign his horse failed, he did manage to recruit another former crowd pleaser in Gabriel Obertan and the two of them posed with Antonio Valencia in a repeat of the picture most linked to the Glaziers reign. In 2009 the freckled fuckwits sold Ronaldo and replaced him with these three buffoons, a bit like you swapping your children for a bag of human vomit and a vial of anthrax.

With an average attendance of 43 watching home games it was no surprise when the club went up for sale but the continual shithousing from the Glaziers meant that the debt of £3.1bn far outweighed the value £50,000 and administration was confirmed on the 14th February 2020. The club was docked 1,045 points by the FA (now run by Ron Atkinson who returned to prominence with the LMA in August 2014 just prior to MCkaygate) and were relegated to the Farleys Rusk north east hangover league division 11. Tom Cleverly was named player captain manager coach rush goalie linesman.

Final position bent over the kitchen table with a blindfold

One response to “Red Therapy: Where will United be in 5 years?”