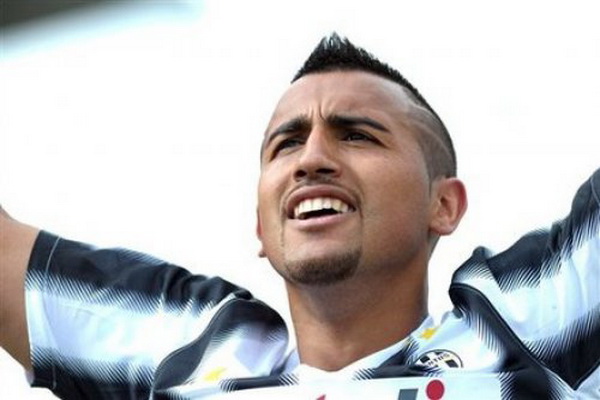 So, after the signings of Luke Shaw and Ander Herrera earlier in the summer, Ed Woodward has done something that many of us thought impossible and actually gone out and bought a player for Louis van Gaal. Nothing’s official yet, but last night Marcos Rojo spoke openly on Argentine radio about his delight at joining United and playing under van Gaal. If he’s confident enough to speak about it so publicly, we should take it as a given that the deal’s as good as done.

While it’s a positive that we’ve finally added another player to what is quite frankly a vastly undermanned and lacking in quality squad, there’s no point in denying that Rojo was far from first choice. As far as centre-backs go, he wouldn’t be the first name to spring to mind when thinking of world class additions. Above him on united’s wishlist, if rumours are to be believed, was Dortmund’s Mats Hummels, Roma’s Mehdi Benatia and obviously, Arsenal’s Thomas Vermaelen.

Hummels is staying at Dortmund and it appears Benatia could be on his way to either Chelsea or Bayern Munich while we all now know that United’s dithering meant that Vermaelen ended up at Camp Nou rather than Old Trafford this summer. My point here is that a club in United’s position will find it hard to sign their main targets. We cannot offer Champions League football and aside from that, Ed Woodward appears far too tentative and conservative to be able to go all out to secure top targets.

These are the reasons why, in my opinion, there’s little point in United fans talking about Angel Di Maria or Arturo Vidal joining us at this point because they probably won’t. Most of the major clubs in Europe like to get their business done quick and early in the summer. It is to United’s detriment and indeed speaks volumes about our current standing that we are once again left scurrying to get necessary business done with less than two weeks left in the transfer window.

Not only do Europe’s main sides like to buy players early but they also prefer to sell players early too. Doing so avoids disrupting the squad so close to the season and as such it can be difficult for sides to push through major deals late in the window. It’s not unheard of, but it is unlikely. This is why Angel Di Maria, who Carlo Ancelotti wants to keep at Madrid, is unlikely to go and it is also why Arturo Vidal, who Massimiliano Allegri definitely wants to keep at Juve, is unlikely to go too.

As such, Ed Woodward and United would be better served casting their collective eye elsewhere to attempt to sign players who are realistic options, rather than just those who’ve been regularly touted.

Firstly, the club still needs reinforcements in defence. Rojo’s signing is encouraging and a decent start but it’s not the answer to all our problems. Simply put, we need more players. We also need more quality so it’ll be a difficult task, but there are players out there, the club just may need to look in unexpected places.

The club was happy to go for a rival’s unneeded player in Thomas Vermaelen, and while Arsenal’s rivalry with United is nowhere near as passionate as that with City, in my opinion there are worse players we could go for than their centre-back Matija Nastasic. The Serb was incredibly impressive in his first season in the Premier League and looked a star in the making after arriving from Fiorentina. However, injuries and subsequent losses of form have left him surplus to requirements at the Etihad. I’m aware that his signing may not be a popular one but Woodward has left it so late once again that perhaps it’s time to make some ballsy decisions. Nastasic is still only 21 so any talk of him not being good enough is ridiculous in my opinion. He adapted very quickly to the league upon his arrival and like with many players, the interruption brought on by a spell out has cost him his place at his current club. He’d be a bit of a gamble but considering his age and his ability to play out from the back, I reckon he’d be worth a shout.

As I’ve stated above, the first choice for centre-midfield would undoubtedly be Arturo Vidal. The Chilean is quite simply the best all-round midfielder in world football today and his signing would dramatically improve United instantly. However, as Miguel Delaney stated in an ESPN piece yesterday, Juve set an internal deadline of last Friday for any inquiries about Vidal and since United didn’t push, that saga looks likely to end like many others. So, who else to go for? Were he fit, Ilkay Gundogan would no doubt be linked with the club, however considering LVG’s reservations over Vidal’s knee, he may not have even considered Gundogan and his notoriously troublesome back. I said it on Twitter yesterday and I stand by the opinion that we could do a lot worse than Radja Nainggolan of Roma. The Belgian moved on loan to Roma from Cagliari before being signed permanently quite recently. As such, it’s unlikely we’d be able to sign him but if Ed were to put in a bid of £20M or so, the Italians may find it hard to resist. Nainggolan is not the most glamorous of players but he’d be perfect for United’s midfield. Incredibly physical and competitive, he’d provide the bite and intensity in midfield that the club have been lacking for years. Along with this, he’s technically gifted. His range of passing is superb and his positional sense and defensive play would shore up that gap between United’s midfield and defence that has been a problem area for a long time. The guy’s as tough as nails and in my opinion is the midfield enforcer Untied have been screaming out for for ages.

The talk of Di Maria joining is fanciful in my opinion, at this stage in the window at least, but it doesn’t change the fact that club needs more options going forward. However, tie into this the more immediate need for midfield reinforcements (even if Nainggolan were to join) and perhaps the club are better off going for a more attack-minded centre-midfielder. Kevin Strootman would be the go-to guy if he was fit and indeed he may already be with us, were that the case. But it’s not and so other options must be looked at. In my eyes, if a club is looking for an attacking midfield presence there’s really no point in looking further than Marek Hamsik of Napoli. The Slovakian international has been with the Neapolitans since he moved there from Brescia in 2007 and has been one of their main creative forces ever since. At one point, he was part of a trio including himself, Edinson Cavani and Ezequiel Lavezzi that terrorized Serie A defences. Those two are in Paris now though and it’s surprising that Hamsik has not followed them out the door. Napoli are a quality team and have reinvested well after those sales but if United, despite the lack of European football, were to come in with a big bid there’s every chance we could sign him. He’s an absolutely incredible player and at 27 he’s slap bang in his prime. Napoli would be hesitant to let him go and he may not even want the move but if we have the financial clout that Woodward claims we do, then we should test their resolve. He, along with a more defensive-minded midfielder like Nainggolan, would change the complexion of the side immediately.

Despite all of this, there’s every chance that van Gaal and Woodward aren’t even looking at these players. They may have other targets and that’s fine, but if these last few transfer windows have taught us anything it’s that more often than not, United need a Plan B in the transfer market. We’re not on the level of Bayern, Chelsea or Barca currently and as such, we have to act early or alternate. We’ve already missed the boat on the first option so perhaps it’s time that the club used a bit of imagination. They did it with Rojo, who few considered until recently, if they do it with regards to our midfield we may end up with a more fruitful summer than expected.

There’s no time for dithering though, the club must act now.