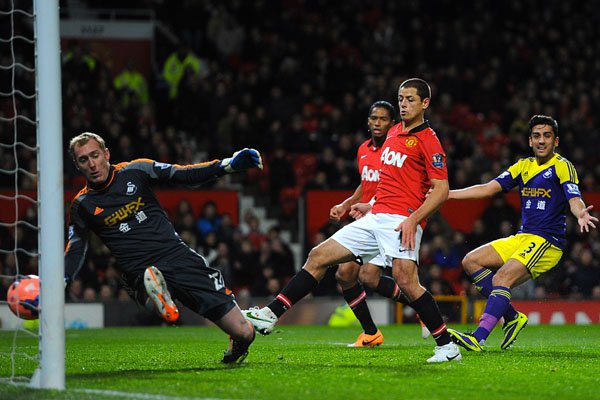 Manchester United kick start the 2014-15 season at home to Swansea City with Louis van Gaal managing in his first Premier League outing. I spoke to Scott Mackay of The Swansea Way to get more info on the Welsh club.

– SN: Swansea were very inconsistent last season. How did you rate 2013-14 for your club?

– TSW: With trepidation, being honest. That being said how Garry Monk spoke last night at the annual fans’ forum gives me more hope – it sounds like we may well be going one up top this weekend and that’ll be the biggest tactical question all season – do we go with one or two leading the line?

Monk spoke about having to pick and choose the games we go two up top, but impressed we’ll definitely be going with wingers as our “go to” formation – this means I’m once again fairly confident of a decent season, and without European football to add fatigue and an extra distraction I’m reasonably sure we’ll improve on last season’s finish.

– SN: Who was your best player?

– TSW: Bony. The guy is an animal, and if he can carry on where he left off last season he could easily get twenty league goals. Weirdly Laudrup seemed reticent to include him at first but once he became the undoubted first-choice striker he never looked back – and the Swans definitely benefited as a result.

– SN: Happy to see Garry Monk in charge or do you feel Michael Laudrup was dealt with unfairly?

– TSW: Happier than with Laudrup in charge. The team had become disillusioned and the play stagnant, and we needed the change when he was removed – I’ve recently done a series of interviews with fans of other teams and I find it amusing how much people seemed to have rated Laudrup. If he’d have been in charge of your club you’d have had a different opinion!

– SN: Tell us about your rivalry with Cardiff.

– TSW: It’s been very nasty in the past to be honest. For a long time away fans were banned from attending games, and to this day away fans are bussed in using organised “bubble trips” where as the convoy passes motorway junctions they’re closed and there’s police on every bridge as you head down the motorway. It’s a massive police operation, and thankfully there’ve been very few problems of late.

– TSW: I like Manchester United for traditionally giving some of their youth players a chance, but we’re seeing less of that from them now (as is the norm) and I don’t like clubs being in the hands of mega-rich foreign owners who see a club as more of a commodity than an entity. There’s little most people seem to want to do about that though, so until something is done to stop the big-money lop-siding of football clubs who are run on an even keel will always have to settle for a place outside the top six or seven. There are much worse examples of foreign owners running clubs than United, I will say that.

– TSW: Staving off relegation from the Conference on the last day of the 2002/03 season against Hull. Local lad James Thomas scored a hat-trick to help us win 4-2 and guarantee our league position for next year in front of a packed Vetch Field, and it was pandemonium when the final whistle went. We’ve never looked back.

– SN: Favourite player either past or present?

– TSW: It would be easy to say Lee Trundle, but I’ll be even more predictable and say Leon Britton. The guy epitomises what we’re about, and has shown his class by stepping up through the divisions with aplomb. In any other footballing nation Leon would have international recognition.

– SN: Predictions for the upcoming season…

– TSW: I’ve picked Man Utd as dark horses for a title shot – without European football and with an actual footballing manager in charge you’ve as good a shot as any. It’s hard to look past your nearest and dearest though – I read that Hart, Kompany, Toure & Aguero only played seven games together last season, and in those game City scored twenty-eight goals. If they’re all fit for the majority of the season they could run away it.

– SN: Last but not least, tell us about The Swansea Way.

– TSW: I started the website last February as I was growing tired of the vitriol and nastiness you find on most forums. I just want to talk football (well, the majority of the time anyway!), and my aim is for TSW to become the go-to website for opinion on the Swans. On average we’re getting about three pieces up a day at the moment, and we’re now receiving over 100,000 views a month – here’s to the future!

One response to “Manchester United vs Swansea: Q&A Preview with The Swansea Way”