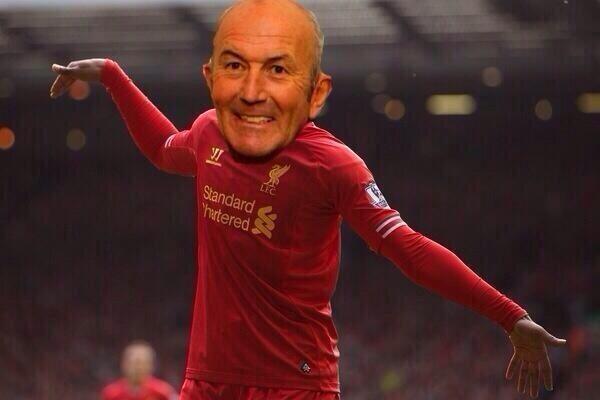 Stretty News would like to welcome John Young back to the writers team. Red Therapy, a weekly column under his name, pokes fun at several Premier League clubs, including our beloved Manchester United, with a satirical viewpoint.

Imagine you worked in a very tall building. The building had a comfort borne of familiarity and over time had become like a second home as you had worked there for so long. For 99.9% of the time you had thoroughly enjoyed yourself. Sure there was the odd challenge, once or twice a colour printer had tried to use its Wi-Fi connection to sell itself on eBay and a few years back you were forced to downgrade from a state of the art Apple MacBook to a calculator, a Sony Walkman and an A4 pad with a couple of penis scribbles on the front cover but that aside, times had been great.

Imagine one day you went to call the lift as you did every day at home time and expectantly waited secretly looking forward to having an inane chat with the lift porter. The lift porter that always wore shorts, rain or shine, and seemingly had no other responsibilities than pushing a button you probably could have pushed yourself. But he was a super chap. Imagine all the familiar faces waiting for the lift with you, people you have grown really close to over all the years you have worked in this really tall building, excitedly chattering about what might happen over the coming weeks, months and years. Sounds nice, doesn’t it? Warm and cosy.

Then imagine the lift over trains all your players, denies them the requisite amount of ball work, shuns attacking coaching, extols the virtues of an average defender to a couple of legendary defenders, creates a ‘try’ culture, loses the confidence of the first team, almost loses the Premier League’s top goalscorer, loses the league title, 12 league games, the confidence of the fans, the signing of Thiago Alcantara, multiple league records and then claims “it wasnea ma fault.” Tell me, how would you feel? Pretty fucked off with David Moyes I bet.

The lift is almost back in working order now, has a new porter and a couple of fancy new bits of kit and if a few more are ordered from Mendes stationary equipment before the promotional period ends things might be ok.

Just for absolute clarity that was a partial analogy of Manchester United.

But what of the other tall buildings (football clubs)… how will they fare in the new season? Will they flourish again or will they suffer terrible unforeseen problems and allow Manchester United to win the league in miraculous and seemingly unlikely fashion? Lets see.

On the face of things, Pellegrini has recruited well, adding an apparently excellent defender in Mangala, a solid goalkeeper in Willy Caballero and a man whose hair will make Sergio Ageuro feel better about himself in Bacary Sagna. Dig a little deeper though and things aren’t so rosy. Yaya didn’t get the focus he demanded on his birthday, Fernando and Fernandinho are going to put James Milner into such a state of flux with their seemingly indistinguishable names and perhaps most concerning of all is the future of David Silva. Yes he may have just signed a new contract but what state will he be in mentally? The very second boxing promoter Frank Warren came out as a woman every single City fan’s heart must have sank, with an inspirational figure in the public eye making it seem permissible to switch gender in the machismo sporting world nothing will stop David Silva complete his transition to Daisy thereby leaving a creativity gap as big as the departing Lescott’s forehead. Add this to the fact that they only won the league last season because Gerrard fell over and Mourinho played 4-6-0 at Old Trafford and City have a problem.

Who will ever forget the image of Gerrard pushing a television camera away from his crying teammate Luis Suarez at Selhurst Park? The image was so sad and so impactful because the Lego headed DJ bottler is normally so keen to kiss said recording instruments. Three months on and Luis is gone, having bitten off more than he could chew at the World Cup, although the more cynical amongst us might imply that Chiellini’s shoulder was a pre planned snack added to Suarez’s normal menu of fuckwittery by Barcelona. Liverpool have followed the Tottenham formula this summer – sell your best player and then spend all the money and more on a load of shite. Tottenham of course copied it in turn from United a la summer 2009. Except United spent a quarter of the money on a reasonable winger, a helium balloon and a racehorse enthusiast with the charisma of an anal bleaching kit.

I worry about on-pitch chemistry for Liverpool, sure Suarez used to flash a toothy grin (he would struggle not to flash those weapons) every time Sturridge did his dance or Sterling ran about like a flappy bird in a high wind but what will Rickie lambert make of it? He didn’t spend 15 years hand painting albino beetroots in near sweatshop conditions to share a pitch with a couple of big jessies like this. Give it a few games and the former Bedlington Terriers talisman will run out of patience and explosively losing his rag as Henderson, Sterling and Sturridge pose for a selfie while jostling for position at a corner. With the ambulance men will depart the scousers dreams for another season despite the best efforts of Lambert and Lallana to get them to midtable nirvana.

MY PREDICTION 12th (slip-off, you bastards)

“Ooh Jose is so handsome and enigmatic and super and fun. If only he had got a proper striker that could score goals he would have won the league and that would have been brill” said all the journalists at the end of last season. Ooh super now they have one, that brilliant Diego Costa.

Except they don’t. They have a retrograde Neolithic Heskey-a-like who managed to poke a few goals in against the also rans of a league that, with the exception of the top 3, Hertha Berlin could dominate. Sadly my prophetic otter tells me Costa will cost Chelsea more than just loads of extorted oil money, the otter says one day while the fun boys (Oscar, Hazard, Costa & Cristoph Dugarry) are crossing the kings Road Costa will get his hoof caught in some raised ironwork and as Dugarry tries to rescue him Oscar and Hazard fall to the ground to try and get the referees attention. Sadly in this scenario the referee is a snowplough and he awards them both a permanent red card.

Unfazed by the loss of his two playmakers, Mourinho declares that Chelsea will be playing 8-2-0 for the rest of the season and, as he utters the final words of his press conference, he is attacked by the spirit of Kerry Dixon and David Speedie leaving him blind in one eye. Chelsea limp along for the rest of the season but sadly an FA Cup defeat to Liverpool ladies team proves fatal for Mourinho and he is replaced by Tony Pube-less.

MY PREDICTION – 17th (park your bus and get on with it)

As always despite promising their fans a title was on the cards after passing Hull City off the pitch on a nice sunny Saturday in September before getting absolutely penetrated on the kitchen table at Newcastle on Sat 21st March. Hope gives way to despair and its likely that Arteta will give way to my nan before we celebrate the death of little baby jesus.

I’ll be back next week with more satirical views. If you don’t like this, press the back button and read something else. This is not for the easily offended… or, basically those without a sense of humour.