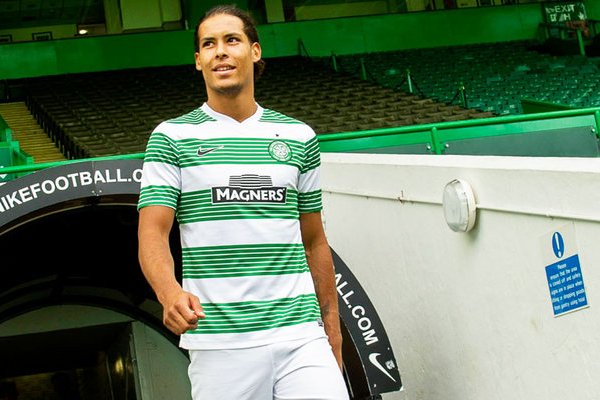 Kirean Caw of the Celtic Journal writes about Virgil van Dijk and how the Dutch defender could fit into Louis van Gaal’s back three at Manchester United.

In recent years, Celtic have had a very successful signing policy of buying cheap, young prospects and later selling them for millions more after being developed into considerably better players.

The latest in this conveyor belt of success is a young Dutchman who goes by the name of Virgil van Dijk.

Signed from FC Groningen in the summer of 2013, van Dijk came to Scotland with plenty of praise and a decent pedigree.

The former Dutch U21 internationalist won Groningen’s Player of the Year award in his final season with the club and was hailed as the best defender in the Eredivise by then Feyenoord striker Graziano Pelle.

Tipping him to go far in the game, Ajax manager Frank de Boer stated that Virgil van Dijk “has all the qualities of a central defender” – and at just twenty-three years of age he is already proving to be a fantastic defender with ‘something extra’ that sets him aside from others in the Celtic squad.

Virgil’s composure on the ball and his ability to take control of difficult situations is not a trait most defenders can claim to be comfortable with. He often opts to play the ball out of defence rather than panicking before hoofing the ball into row Z – sometimes there’s just no stopping him.

It goes without saying that defending is the most important job for a defender. However, van Dijk is also a threat at the other end of the pitch at corners…and he can also hit a free-kick or two. At Groningen he was their their main free-kick taker and the 6ft 4in centre back also scored this fantastic goal for Celtic last season:

Again, it is an added extra to his game that not many defenders are capable of. It is of little surprise that he has scored fourteen goals in five seasons of his professional career, contributing seven of those during his time at Celtic.

It had been reported that the new Manchester United boss did not include Virgil van Dijk in his Netherlands World Cup squad due to playing in an inferior league and wanted the defender to test himself in a stronger environment before fighting for a place in the Dutch starting XI. Could it be possible that, despite no longer being in charge of Netherlands, Louis van Gaal gives his fellow countryman that opportunity?

In terms of what he could bring to Louis van Gaal’s Manchester United side, the left-sided defender’s pace and ability to pick a pass would be his standout attributes. In van Gaal’s 3-5-2 formation, Virgil van Dijk would undeniably be a more reliable and versatile option than the likes of Jonny Evans or Phil Jones.

Although Manchester United supporters would have every right to be sceptical of signing a player from the Scottish Premiership if a move ever did materialise, there are always one or two footballers in smaller leagues who are destined to play at the highest possible level. In this case, Virgil, if he fulfils his potential, is that one special player from Scotland’s top flight.

To play for Manchester United in one of the best leagues in the world would be a very, very big step up for any player, no matter the level they had played at previously. Despite playing in the Scottish Premiership and the Eredivise, Virgil van Dijk is a player capable of making that jump and, although he may join a smaller club beforehand, it is only a matter of time before one of England’s top teams do take the gamble of signing him.

Manchester United, it seems, are not currently blessed with great centre backs. Despite this, of course, it is worth wondering why van Gaal would even consider shopping in a poor league when he could go after some of the world’s top defenders. Like every footballer, though, they have to begin their careers somewhere.

If United do come calling, Virgil van Dijk, although he does have flaws in his game, will certainly be ready to handle playing against the best strikers in the English Premier League.