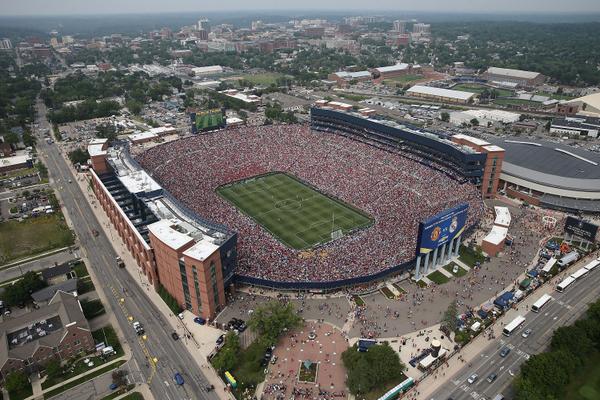 It is amazing how Louis van Gaal has made players low in confidence perform so soon. Manchester United have claimed 4 victories from as many games over sides such as LA Galaxy, AS Roma, Inter Milan and now European Champions Real Madrid.

Everything seems to be working out and the players are genuinely in awe with their new manager. It makes pleasant observing in comparison to the mess David Moyes created and I would be of the opinion that he should have been the man appointed this time last year.

A record breaking 109,000 were in attendance for the pre-season friendly between Manchester United and Real Madrid. Football in the US has never witnessed anything like this, so the Glazer family will be thrilled to come away having beat the champions of Europe.

The live blog was run successfully by Wayne Farry, therefore, you will see more of them throughout the upcoming season. Any other recommendations will be gratefully received via email.

Below are some pointers I took from the game. Whether you agree or not, let us know in the comment section.

1) United spread the ball around brilliantly in the first half at high tempo with Madrid struggling to keep up. A recurring theme on tour has been intensive pressing which puts a lot of pressure on your opponent forcing them into making mistakes.

A lot was made about the pitch prior to the game but it didn’t seem that bad despite being laid Tuesday and finished just on Thursday. In fact, it was the first time since 2002 that the Michigan Stadium had grass as it is usually used for American Football – you know, that artificial stuff.

However, the second half was played at a much slower pace but Madrid still struggled to take advantage of that. While they showed glimpses of quality, United were the superior side. The players were thrilled once the full time whistle was blown, quickly getting into a smiles all round photograph.

Top photo of the lads following their win over the European Champions pic.twitter.com/mKenMXP4MA

2) Ashley Young’s terrific form continued in the wing back role. If you told me 5 months ago that the England international would be playing left wing back while scoring two stunning goals against Real Madrid I’d have enquired about what you were smoking.

Van Gaal has obviously put a lot of belief into the 29-year-old and he is proving to be surprisingly comfortable defensively. What I have observed mostly is his tracking of runners and reading of the game. Then again, I suppose at that age it is about time Young stood up and proved what he’s made of.

Thankfully, social media was less of a schoolyard after the game. Young received support – not abuse – which is something that there’s been real lack of despite being one of our players that never steps out of line and works hard. Shame on him for not being George Best or Cristiano Ronaldo.

3) Speaking of Ronaldo, the Portuguese winger came on as substitute with fifteen minutes remaining on the clock. Tyler Blackett dealt with the current Ballon D’or holder really well and was not one bit fazed.

The young lads have done very well on tour when you consider the impact made by all Michael Keane, Reece James and, of course, Blackett. Wilfried Zaha, Will Keane and Jessie Lingard’s in the meantime have not gone unnoticed. We might see some of these sent on load but right now M Keane, Zaha and Blackett deserve a chance within the first team at some stage during the upcoming season. The rest need more work but maybe Lingard’s an exception, although I cannot see him showcase all of his attributes at wing back unfortunately.

4) The club’s man of the match, voted on a Twitter poll, went to Ashley Young. While it’s not the craziest of shouts, I would have opted for either Darren Fletcher or Phil Jones.

Fletcher on tour and improved as the games went on. Last night he resembled his old self which is a remarkable thing to say when you consider what the Scot has been through the past two years. Hopefully this continues once the season kicks off because if it does, the newly stated veteran is a definite starter alongside Ander Herrera. That is if we don’t purchase a marque signing like, er, that Chilean guy.

Jones, on the other hand, was tremendously solid at the back. He lead the way with a player at either side. Last ditch tackles, headed interceptions… you name it.

United, however, are still in need of a defender or two to strengthen Van Gaal’s selection and increase competition for places. In ‘Manchester United around the web‘ on Friday, we shared a piece from the Guardian regarding Arsenal’s Thomas Vermaelen.

5) Next up for United on tour is Liverpool in the International Champions Cup final. The champions bit is a tad ironic, eh? Van Gaal’s first North West derby in… you guessed it, Miami, and we’ll be covering it as per usual.