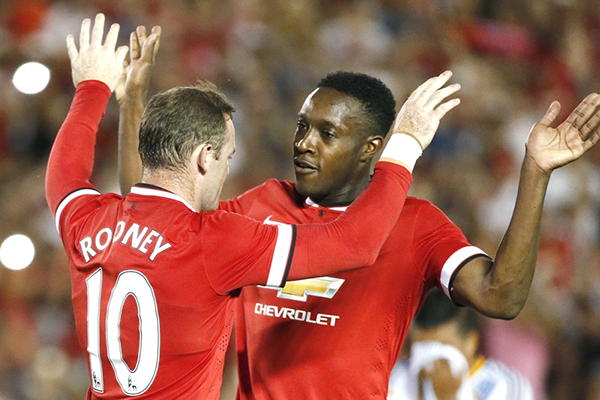 Good morning. The weekend is near so those lucky enough to find themselves employed are just one day away from being free. Free to go out, wake up severely hungover or read petty arguments across social media. I know what sounds more appealing.

While you murder a few Captain Morgans or whatever quenches your alcohol craving thrust, Manchester United take on Real Madrid in Miami. Throughout the pre-season tour, SN has introduced live blogs and they have gone down surprisingly well. Fortunately this weekend the tavern calls and Wayne Farry, our latest contributor, takes over, and I’ll be taking advantage.

Wayne has wrote two articles thus far. The “United-obsessed football blogman” has looked at the return of ‘the United way’ and Louis van Gaal being a beautiful monster. His stuff goes down well and, as a result, there will be more to follow.

So, fun times are ahead, the blog is going places and there should be a redesign launched soon. More importantly United have been impressive and fans have every right to be excited going into the new season under Van Gaal.

The Dutchman has come in with a bang and looks bullish when pulling a punch. Singled out by many, as are all chief executives during silly season, Edward Woodward must be aware that if he does not pull his weight and complete the signings Van Gaal requests, a public slating may be upon the horizon.

Most fresh starts are a relief but for Woodward it will be just as demanding as that for current players, who are undoubtably playing for their Manchester United careers. I do not expect Van Gaal to be equally patient with each member of the squad but those deserving of a chance will get just that.

Italian press will have you believe Marouane Fellaini is a target for Napoli but then, when you think about Rafael Benitez doing us a favour, it seems too good to be true. Footage of open training sessions should be enough to tell you he has no future at the club. What we have seen in training and during previous games on tour under Van Gaal are pure examples of high intensity, quick movement, pressing and, of course, an array of passing. Basically, everything that should horrify the Belgian midfielder.

It’s players such as Ashley Young, Tom Cleverley and Danny Welbeck that I believe will flourish under the new United boss. Firstly, there is Young, now being examined in the wing back role, right and left, presumingly as back up. Cleverley has the ability to succeed but it depends entirely on what system is being played. Hoof ball under David Moyes did not go down well and it was never ever, ever, ever, ever, ever, ever going to.

Another name perhaps more surprisingly mentioned is Danny Welbeck, a Longsight lad that not only understands but loves the club. His finishing may not be up to the standard of Robin van Persie or even Wayne Rooney, but that can be said about many strikers and they receive less abuse from their own fans.

That is something all three of these players share in common. In their own ways are fine footballers, rarely step out of line, love the club and it is all ignored by some.

I will admit, however, that by the end of last season the gut feeling was that Ashley Young should move on. He’s not exactly young (erm, bit ironic) and there were no signs whatsoever of him being anywhere near good enough for United. Since then, Van Gaal has arrived with an open mind and is testing Young out in a different role at wing back. The England international still has a lot of convincing to do but at the moment we are without realistic back up for Luke Shaw and if he can continue to impress, why not use it to our advantage?

In the win over Inter Milan, Young played on the right and left. His tracking of runners was executed immensely and he is already a player renowned for getting up and down the line superbly. While that sounds very positive for a player I had questioned just months ago, the finished product has always been the issue and he tackled better than I’ve seen him cross since arriving from Villa Park.

If Van Gaal can make effective use of Young as a back up wing back, it may result in more being available to spend on a marque centre-back or midfielder with required experience and talents.

That does not necessarily mean Ashley Young is your average makeshift squad player that is stealing a career at Manchester United. There must be emphasis on the term ‘effective’, and if Young proves to be that in his new role, the squad benefits. Although, there is an argument here – should a squad player earn such a high salary?

In the comments below, feel free to voice your thoughts on the three regularly mentioned players in this piece. In truth, all we are interested in is whether they make your Fantasy Football team, so sign up and compete with other readers and claim bragging rights. The code for those too lazy to click on the previous link: 726186-178527.

p.s. Keep an eye out for my piece in the Daily Mail later today. It relates to the captaincy situation at United right now with four listed candidates.