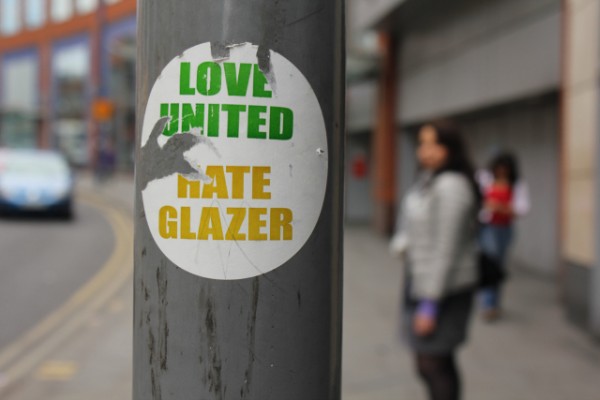 Following the post-Moyes recovery in the share price of Manchester United plc (MANU), inspired in part by the record-breaking GBP 750m adidas kit sponsorship deal, the controlling Glazer family have decided to cash in by selling at least 8 million shares, or approximately 5% of the total issued share capital. There is an option for them to sell a further 1.2 million shares if there is sufficient investor demand, so a maximum of 5.75% of the club will be sold in this tranche. Following the sale, the Glazers will retain over 84% of the club’s shares.

At the current share price (at time of writing) of US$19.30 per share, the Glazers will trouser somewhere between US$154.4m (or GBP 91.3m) and US$177.6m (or GBP 105m). Note that the actual sale price will be set based on the market price at the actual date of sale, which has not yet been fixed. So the Glazers may receive more or less than this depending on the performance of the MANU share price over the next few weeks.

As the prospectus filed with the US Securities and Exchange Commission makes clear, the shares will be sold by the Glazers rather than by the club, and hence all sale proceeds will accrue to the Glazers. The share sale will not benefit the club in any way.

Whereas the August 2012 IPO of MANU could potentially have failed, had there been insufficient investor demand for the shares (an outcome that the Manchester United Supporters Trust vocally and unsuccessfully lobbied for), there is no realistic prospect of this sale not going ahead. The only practical scenario where this sale might “fail” would be if the MANU share price collapsed to a level where the Glazers declined to sell.

With this in mind, the Glazers have timed their sale well. Although no sale date has yet been fixed, with the investor roadshow commencing next week it’s virtually certain that the sale will occur prior to the close of this summer’s transfer window, and possibly even before the club’s first Premier League match against Swansea on 16 August. The sales proceeds realised by the Glazers should therefore be unaffected by splurging in the transfer market (as if that would happen!) or by any potential deterioration in investor confidence in the event that the squad struggles in the first few weeks of the upcoming season.

As with the shares sold by the Glazers and the club during the 2012 IPO, shares sold in this tranche will carry extremely limited voting rights and no dividend rights. The Glazers’ control and management of the club will therefore be entirely unaffected.

During the worst days of the Moyes interregnum, with the share price hovering around US$14.50 and the entire club being valued by the stock market at around US$2 billion, there were persistent rumours that the Glazer family would happily sell out if offered US$3.5 billion. With the club now being valued at close to US$3.2 billion more recently, that asking price has almost certainly increased as well. US$4 billion, anybody?

There were also rumours of a split in the Glazer family, with Avram, Bryan and Joel Glazer believed to be in favour of hanging on for the long haul whereas Dopey, Bashful and Sleepy Glazer were understood to be strongly arguing for a sale of an “asset” that they had never visited or shown any interest in. This current sale of a tranche of stock seems to be a happy medium for the two factions – it will realise a minimum of US$25 million in cash for each Glazer whilst leaving the family firmly at the helm.

The prospectus includes some financial estimates for the year ended 30 June 2014 – although the financial year ended a month ago, the books are still being drawn up and so final financials have yet to be calculated.

The club indicates that revenues for the year are expected to have risen by approximately 19% to GBP 430 million, which is clearly positive. However, that revenue increase is almost exactly matched by a 19 – 20% increase in operating expenses to GBP 370 million, which the club has blamed on player purchases and wage increases when renegotiating existing player contracts. Net profit for the year is expected to be down approximately 83% to GBP 25 million from 146 million last year, but the 2013 reported profit was unusually high to a one-off tax credit which is not recurring.

The dreaded “net finance costs” are expected to come in at about GBP 27 million – while Glazer apologists tend to now describe the debt as “manageable”, the figures in black and white indicate that were the club debt-free, it could basically purchase an additional top player each year with the savings from servicing the so-called “manageable” debt.

Finally, the club indicates that “net player capital expenditure” for 2014 is expected to have come in at approximately GBP 79 million, and that player expenditure in future will vary greatly as:

“Competition for talented players may force clubs to spend increasing amounts on player registration fees. As we remain committed to attracting and retaining the highest quality players, increases in player capital expenditure will likely result in increases in expenditures for player wages.”

The GBP 79 million figure isn’t broken down but presumably includes the purchases of Marouane Fellaini, Juan Mata and Guillermo Varela. Based on reported fees of approximately GBP 27.5 million, 37 million and 1 million, that only comes in at 65.5 million. What the unexplained balance of GBP11.5 million was spent on is a mystery – agents fees? David Moyes’ pay-off?

The comment about expected increases in transfer fees and player wages is interesting as the American owners of English clubs like Manchester United, Arsenal and Liverpool have all previously stated their hope that UEFA and Premier League Financial Fair Play regulations would help keep a lid on both those expenditures. This prospectus seems to indicate that Manchester United at least have tossed in the towel on that theory.