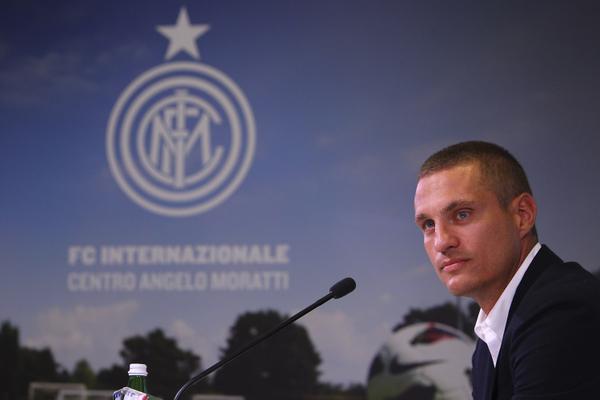 The first player to leave Manchester United this summer did so after signing a pre-contract with Inter Milan in March. Nemanja Vidic was regrettably seen through the exit door of Old Trafford, or Old Traddord as seen at the FedEx Field last night.

Nobody knows the exact reasons for Vidic wanting to leave but we have a pretty good idea. After David Moyes got the sack it became clear that the club were heading in a brighter direction having learned from a valuable mistake. A number of players had considered leaving due to his questionable management which lead to a decline for the club – going from first to seventh in the space of twelve months.

Vidic made a request to Edward Woodward to see if there was anyway to terminate the pre-contract made with Inter Milan but there was nothing United could do. The timing of this is unknown but with Louis van Gaal in currently in charge, there’s a good chance he would have stayed. That would have made us less desperate in today’s transfer market for a defender given Vidic’s complete and utter control at the back.

Pace was never a major factor of Vidic’s game and despite losing a yard of so with age, the Serie A should be a breeze for the Serb. He was terrific at the heart of Inter Milan’s back four last night and it wasn’t until his substitution that United had a number of threatening attempts on goal, although the best chance came from a Phil Jones header prior to half time.

The 32-year-old even had his fair share of attempts on goal offering his typical presence inside the box from in-swinging corners. Although none were on target, they provided United’s defense with a real test.

Prior to the game itself, Vidic spoke exclusively to MUTV. He kept referring to United as “we” which made seeing him part of the opposition more difficult. When asked how the Italian language was coming along, the former United defender said: “I know a few words. I know good and some bad words. It’s fun. I’m learning slowly.”

Paddy Crerand, like ourselves, was saddened to see Vidic turn out for Inter Milan. Fellow Scot Darren Fletcher hit the nail on top of the head when asked about his former teammate: “If there was a defender made for the Premier League, I think it was Nemanja Vidic.”

Meanwhile, Nemanja Vidic is not the only experienced defender to leave Old Trafford this summer. Patrice Evra joined Juventus and Rio Ferdinand moved back to London signing for Queens Park Rangers. The respected trio played an important role in Manchester United’s recent history with all sharing periods of captaincy throughout the club’s most successful era.

In conclusion, the club moves on as it has done with all great players. We got the best out of Vidic, Ferdinand and Evra and it’s a credit to say that about three fantastic players. What they share in common is value off the pitch as well as on it. United will miss that and must replace them with experience because their individual attributes won’t be easy to match.