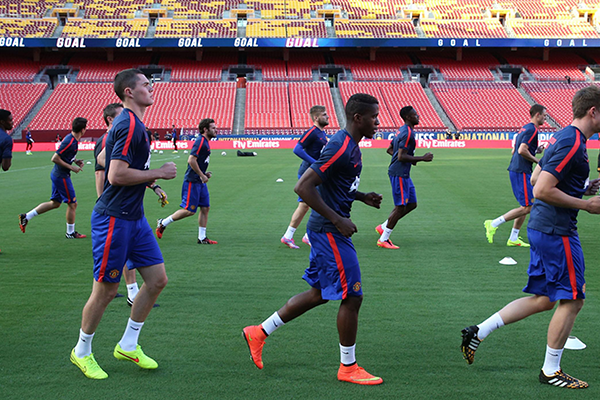 Authoritarian Louis van Gaal strikes again, with the most recent victim being 19-year-old Luke Shaw who was recently seen being put through the paces on his own in training. The revolutionary manager isn’t that, instead he’s a bright gaffer who is not afraid to ruffle a few feathers along the way. A man as controlling as Sir Alex Ferguson during his 26-year career with Manchester United, Louis van Gaal faces the daunting task of fixing the ‘broken squad’ from the previous twelve month fiasco.

Right then, now that we’ve got the news bits out – we all knew Nemanja Vidic would be sporting the Inter Milan kit this evening, my heart sunk to my knees. Just as Manchester United are undergoing a period of transition, Inter Milan are as well without long-time defensive mainstay Javier Zanetti.

Eight years in a Manchester United kit, the past four wearing the captains armband were all thrust aside when the centre ref blew to begin the match – Vidic was now the enemy.

To start the first half, United truly looked strangely, united. While it’d be unfair to dub them the United of old, there is certainly a breath of fresh air surrounding a few of the United players whom failed to perform the past few seasons, in particular Ashley Young. As I’ve previously touted in an interview, I believe Young and Valencia will be what Dirk Kuyt was to the Netherlands. A gritty player capable of scoring goals (not many), and works tirelessly up the flanks. While Young may have a bit more skill and Valencia may have a bit more pace, between the two could mold into a side-line hugging, no nonsense, menacing machine.

And not to beat a dead horse, but Ander Herrera was splendid in the first half. His vision and confidence on the ball is one trait all reds need to quickly learn if they are to press for a record 21st Premier League crown. Herrera was put in a jam on a few occasions, but with a quick one, two touches, he distanced himself from any potential threat and United were out.

However, one area of concern for van Gaal and United, and understandably so, is the inclusion of a back three. The first half sported Chris Smalling, Jonny Evans and Phil Jones as the three, who were caught on a few occasions too high up the pitch – something which van Gaal may like. In any new system, it takes time getting used to, but constantly there were praises flowing from the Dutchman’s mouth “up, up” and “well done.” Understandably, it must be difficult playing for an authoritarian figure like van Gaal, but at the same token it must be absolutely stunning. These three, while they may not be the starters coming three weeks from now with Thomas Vermaelen and Mats Hummels still rumored to be joining Manchester United, have undertaken a task of a new system with quite open arms.

In all honesty, the first 45 minutes was pedestrian. There were however, a few movements up field where United looked of old. A series of over 20 passes leading up to a mistimed cross by Juan Mata was the best movement of the half, but as Louis van Gaal walked with clipboard and pen in hand to the dressing room, he surely had a few changes to make.

United began the second half with eight changes, one of which was Luke Shaw.

Once again, the reds began the half on the front foot, but could not muster up only opportune scoring chances. The build-up play was splendid from Shinji Kagawa, Nani and even Wilfried Zaha who began the half up front. And whilst these three men worked tirelessly throughout the half, it is Untied’s willingness to run for one another which stands out the most. The full van Gaal effect may not be in full force as of yet, but there isn’t a sense of complacency from the reds any longer.

Sure, this is only a preseason match and means a hell of a lot more to American supporters in attendance as opposed to the players themselves, but hell – it’s football. Aside from the terrible wave fans continue to botch throughout the stadium, it was United on the pitch who seem to slowly fire on all cylinders.

The brightest blimp on the radar for Manchester United in the disjointed second half for both squads, was Wilfried Zaha. Zaha created chances for himself, and although van Gaal has stressed he cannot play a wing-back position, and only at forward, he thrived up front. With Rooney, Robin van Persie and even Danny Welbeck choices above Zaha, it may be absolutely difficult for the youngster to break into the first team on a regular basis, however he may fill the void if Javier Hernandez is to depart to Inter Milan as Vidic has asked for.

While United nor Inter could conjure up a goal in the match, per International Champions Cup rules the match went straight to penalties. The night prior, United took penalties in training and we must say – nowt a one was missed. Ashley Young converted the first penalty for United, roofed it.

Javier Hernandez converted the second spot kick to the right corner. It was Andreolli’s shot that went right off the bar down the middle of the net, and the captain (interim or not) cooly finished the clinic with a perfectly placed shot. Amongst the other scorers were Cleverley and Kagawa.

We’ll see you in Ann Arbor, where it’s rumoured there’ll be over 105,000 present in attendance. Football, in America? No doubt about it.