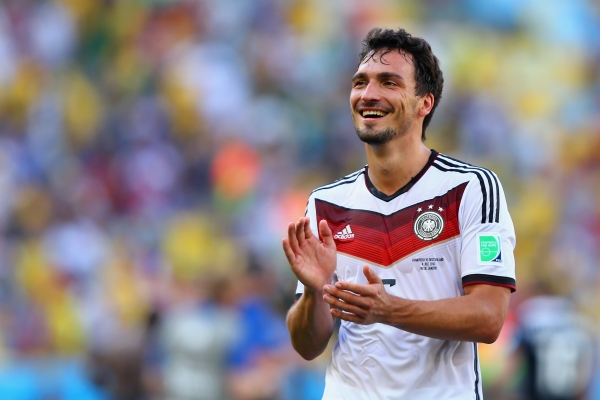 Lets play a bit of word association, or in this case result association. Ready? Okay:

If your answers were Spain, Brazil, LA Galaxy, and first half v AS Roma, then you’ve a very quick mind. All four scores are from games Louis van Gaal has recently managed with either the Dutch national team or Manchester United. They all seem impressive, but when you consider that the first in the pair of United lines came against a comparatively weak MLS side, and the second was almost overturned when Roma roared back in the second half to nearly equalise, you may come to the conclusion that the figures are actually just a coat of gloss slapped on a money-pit of a house to keep the neighbors happy.

If you watched the first thirty minutes of the match in mile-high Denver, Colorado, the portion before the combination of heat and altitude could affect player performance, you would also have seen Roma enjoy the clearer of the chances, especially one in the opening minutes where a lofted ball found a forward splitting United’s 3-man back line. Luckily for United, that Beckham-like ball from Salih Ucan to Mattia Destro, barely into the second minute, resulted in a chip that bounced harmlessly over the bar as a helpless Jonny Evans, covering for the onrushing keeper, Sam Johnstone, heaved a massive sigh of relief. For all Louis van Gaal’s pre-match complaining regarding the early scheduling of the match despite the local conditions, he had the rarified air to thank for a kind bounce that, at sea level, may have found the twine and made for a very different match, one ending with United fans more agitated with regard to what is obviously lacking in the squad than buoyant over its resurgent attack.

After the match, van Gaal responded to questions about the ease of taking over for David Moyes, as opposed to Sir Alex Ferguson, by arguing that it was in fact more difficult, because he had inherited a “broken squad.” He pointed out that the current roster has a glut of attacking options, but is largely “unbalanced.”  By that, of course, he means he is not satisfied with his defenders and holding midfielders, which form the heart of any championship side.

In Brazil, van Gaal had the tandem of Nigel de Jong and Ron Vlaar to disrupt any developing attacks in the middle of the pitch. In his various championship clubs, he was able to call upon the likes of Pep Guardiola, Frank de Boer, Carles Puyol, and Mark van Bommel. In the US, he has discovered the lumber room to be disappointingly bare.

Upon arriving in Manchester immediately after the World Cup, Van Gaal announced he would require time to assess the squad before entering the transfer market. His remarks at the post-Roma presser suggested that he has arrived at some conclusions. Meanwhile, United continue to be linked to expensive players like Angel di Maria, who would be an upgrade, but still an added piece in the already crowded attack, Mats Hummels, whose pedigree is unassailable, as seemingly is BvB’s resolve not to sell, and Thomas Vermaelen, injury prone, but capable of joining in the attack, a talent Van Gaal admittedly appreciates.

The Inter clash last night in Washington, DC, emphasized the need for a strong defence when the attack simply isn’t clicking. It also offered the opportunity to check in on United’s recently departed captain, Nemanja Vidic. The Serbian moved on when it was obvious he didn’t fit into David Moyes’ vision for the club, but before it was decided by higher-ups that said vision did not itself fit in with the club. Vidic will now play in a back three similar to Van Gaal’s at San Siro, under Walter Mazzari, and despite his creaky knees and a lack of pace is expected to be an anchoring force, as well as a leader on a young squad. Former Inter star and fellow Serb Deka Stankovic noted the difference between the supportive aspect of Serie A defending compared to the man-marking Vidic faced in the Premier League when advising his friend and countryman:

“Nema, in Italy there is great attention to detail when it comes to organisation and tactics. For years you have faced the best strikers in the world in one-on-ones with a motorway of space behind you. Here you will play with a cigarette in your mouth.”

The obvious question to ask, then, is whether United would have been in a better position going into the new season had Vidic stayed? When asked that himself in an interview with the Telegraph’s Mark Ogden in May, Vidic was so careful in answering that it was clear there was at least some regret on his part. Yet, if experience, rather than pace, is the more valuable asset in the center of a back three, need United break open the bank to acquire Hummels? There is no question United would be receiving the best of both worlds in capturing the German, but is there good value in it?

Conversely, injuries and questionable defending saw Vermaelen relegated to the Arsenal bench in the middle of the 2013-14 season. United have attacking threats in abundance. What is needed is discipline and grit.

Ron Vlaar, who so capably commanded the Dutch defence in Brazil is in his final year of contract at Aston Villa, with the club said to be intent on re-signing the Dutchman. Surely, however, one would expect van Gaal to have the inside track on prying loose the defensive anchor of his overachieving l’Oranje side. Further, the purchase price for the twenty-nine-year-old would be at least half that of the ransom BvB would eventually exact for Hummels, and, with all due respect to Paul Lambert and Aston Villa, the Birmingham outfit is not operating in the same financial stratosphere as the Westphalians. Admittedly, United typically seek value in youth, but, despite his age, Vlaar’s is the type of economical purchase upon which United has thrived.

Were they able to secure his services, attention would then shift to the lack of depth in the defensive midfield. A so-called destroyer is likely to be the last option that Van Gaal seeks to address before the window closes, simply because he must wait for his best in-house option, Marouaine Fellaini, to return from his post-World Cup holiday.

The Belgian has always been noted for his ability to join the attack, but Van Gaal will want to see if he is willing to do the dirty work, as well. De Jong was an absolute beast for Holland, but the true destroyer is becoming an endangered species as harsh tackling continues to be met with ever harsher discipline. Louis, then, will be on the hunt for a more balanced midfield general with the deftness of touch (you can put your hand down now, Phil Jones) to make both timely interventions without drawing cautions, and precise outlet passes to ignite the offence.

Unfortunately there are very few players who fit that description who have not been clapped in contractual irons by their current club. Here, rather than in central defence, therefore, may be where United will have to invest heavily. The two most attractive options are Arturo Vidal and Sami Khedira. Both have questionable knees, but would nonetheless provide the sought-after blend of grit and flair. The former has been marked ‘not for sale’ by Juventus, and, while the latter may be available with Real Madrid looking to offset the purchases of James Rodriguez and Tony Kroos. Neither will come cheaply, and with Khedira at least, Ed Woodward will almost certainly have to outbid the likes of Arsenal and PSG.

That has not been a quality highlighted on the CV of United’s new executive vice-chairman. In fact, the opposite has largely been the case. Still, Woodward was allegedly outbid with sufficient frequency in his first two transfer windows that he must have picked up a trick or two. Van Gaal must hope so, or the Dutchman may become known as the Tin Man of the 2014-15 Premier League campaign, with the arrival of May finding him singing “if my club only had a heart.”

One response to “The heart of the matter… What are United lacking?”