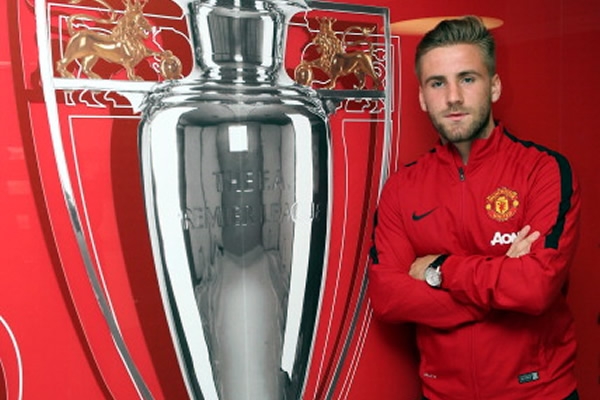 In today’s news Louis van Gaal told the media in Washington DC that Luke Shaw was not fit enough therefore was sent to train on his own. The 19-year-old did so with two coaches and went through the rigmarole of sprinting, passing and crossing.

Shaw is likely to play an unfamiliar role at left back this season for United. Van Gaal has his own plans for each player in order to get them showcasing their strengths, and it’s much better to address an issue like this whilst on tour rather then when the season starts.

It is expected that Van Gaal will set up in a 3-4-1-2 formation which is already being noted as one pretty demanding for full backs. When you consider that and how important it is for the likes of Reece James and Shaw to track back when not bombing forward, the sale of Patrice Evra was more predictable than the vast majority of us imagined.

While he was an incredibly impressive figure off the pitch, Evra’s form dipped dramatically within the previous 2 seasons, especially when you consider how slow he was getting back to defend. However, we you look back at how often he played it was only a matter of time before it came to an end. The French international played 35+ games season after season and that lead to a sense of over reliance. Alexander Buttner or Fabio Da Silva never really offered much threat.

Unless there is more spending to be done at full back – right and left – we are likely to go through something similar. Rafael Da Silva has been sent back to Manchester from the US tour to undergo treatment on a groin injury he picked up in training. The only competition he faces is from Antonio Valencia, who may be surprisingly suited to the wing back role. On the left, second to Shaw is currently James, a 20-year-old that is yet to make a proper break through.

Van Gaal speaks regularly of balance and it’s no secret that the current Manchester United squad lacks that. Signings are needed not only at full back but central midfield also. The days are counting down in the transfer window and there are still players that need selling but recruiting others is essential if United are to have a good run at the title next season.

Speaking to Sky Sports, Van Gaal gave another terrific interview where he opens up about being against buying for the sake of it.

“I buy players to improve my team and first I have to see what we need in all positions from the system we shall play.

“At this moment, I don’t know for sure that we have to play this system. When we play 4-3-3 we shall use more or less the same players but I will need more specialists on the wings & more attackers and then we have to buy another kind of player.”

Again, in reference to balance, Van Gaal speaks of system that will see United play to their strengths.

Being a flexible coach the 62-year-old has done this wherever he’s been rather than being stuck limited to any given formation. This should spark some excitement for the upcoming season despite moving on from the club’s traditions of wing play.