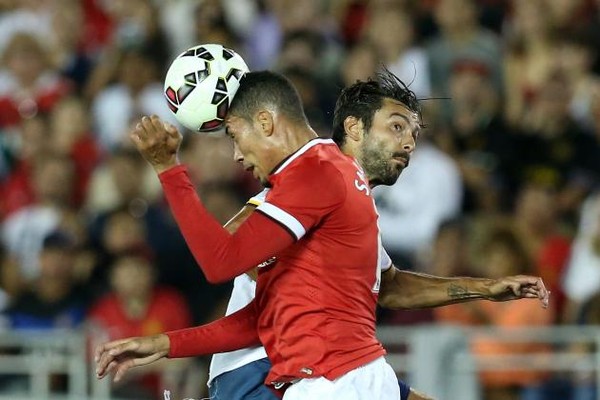 Although, too much should not be taken from pre-season friendlies, it is obviously essential for Louis van Gaal to be able to implement a system that players can perform in successfully. In his first two games, van Gaal has gone for a replica of the 3-5-2 formation that worked so well for the Dutch in the summer. This puts a great degree of emphasis on the three centre-halves and it would be logical to expect investment in this area, especially with the departure of stalwarts Rio Ferdinand and Nemanja Vidic. However, there are three centre-backs currently in the squad who should all be capable of stepping up this season. It is up to van Gaal to decide whether he should place his trust in them.

Despite failing to learn lessons from last summer’s transfer fiascos, Ed Woodward has again promised big signings. Unfortunately, this means that we will be ridiculously over-charged for any player that we are interested in.(Isn’t it interesting how new £20million Real Madrid signing Tony Kroos was always quoted nearer the £50million mark when we were rumoured with him?) Would it be profitable to over-pay for a centre-back when there are few better than our current crop? For example, Holland’s three of Bruno Martins Indi, Ron Vlaar and Stean Di Vrij worked well together but would not be guaranteed to be a success for us. We can learn here though that van Gaal has the ability to take players and mould them into a tight unit and therefore could do the same with our current three. Concerning defenders, Mats Hummels would be a great addition but appears unrealistic. Thomas Vermaelen or Daley Blind would be wise acquisitions but due to their versatility and ability to act as back-up to Luke Shaw, rather than as regular starters to the first eleven. If we are to splash the cash as Woodward promises, a midfield tackler remains the top priority.

The three current centre-backs have all had similar careers at United and have always been talked as great prospects. However, a backwards season for all under David Moyes will have damaged their confidence and reputation. But whilst they are young enough to bounce back from such a disappointing campaign, they should be experienced enough to take responsibility for their careers and earn a starting berth in the team.

At 26, Jonny Evans has 165 appearances and his position in the club should not be doubted by now, especially after a superb 2013. Calm and assured, he should also be one of the candidates for the captaincy, but such was the disappointment of last season, Evans’ place in the team remains under scrutiny. At centre-half, Evans featured in eight of United’s 20 clean sheets last season. He did so alongside four different partners.

Evans will appeal to van Gaal due to his ability to carry the ball out of defence. He is a good passer and can read the game well. His brilliant 2012-13 season also saw him score goals. He is a calm leader. However, for a centre-back, Evans can still not be tough enough and can still get bullied off the ball by aggressive, physical centre-forwards. His biggest issue is his fitness. He has not completed a full season without getting injured and last season was his most injury hit, appearing 25 times.

The purchases of Chris Smalling and Phil Jones was a great sign of forward thinking by Sir Alex Ferguson in his clear attempt to plan for the departure of Ferdinand and Vidic. Smalling was supposed to replicate Ferdinand’s calmness on the ball and pace. Jones would match Vidic’s combativeness and aerial prowess. However, this has not been achieved yet.

The pair have had similar seasons and careers at United. They were both in the top ten appearances for the season, featuring over 30 times each, and are both edging towards a century of United games. They both collected seven clean sheets when playing at centre- back, though only achieved that three times together. They have both also been treated very similarly by both United and England. Their versatility has been seen as an asset yet compromised their ability to cement a place in their expert position. Smalling has been dire at right-back whilst Jones has played in every position possible, ranging from a rampaging full-back to a midfield marker reminiscent of Alan Smith or Phil Neville. Put simply, both have been messed around and not been allowed to prove their true potential. They are centre-backs and should stay there.

Smalling is the best header of a ball at the club and should have all the attributes necessary to be a top class defender. He is fast and agile. However, like some before him, it appears that Old Trafford is too big for him and he has become a nervous wreck in a red shirt. A mistake never feels too far behind and his confidence is so low it is on a par with Ashley Young or Tom Cleverley’s. Unless, van Gaal can inspire Smalling, he appears the defender least likely to be part of future plans.

Phil Jones should be the new John Terry, (on the football field I hasten to add). He should be strong and brave, putting his head where it hurts and defending the goal as if it was his life. He is tremendous at sliding challenges and could inspire those around him just like Vidic used to. He has shown this many times but not consistently enough and whilst he is still only 22, he should have displaced Ferdinand and Vidic a year earlier. It was telling that in Ryan Giggs’ first match, he opted for the veterans as his centre-back pairing.

As well as being asked to play everywhere, Jones has also been treated unfairly in that he has been over hyped, most notably by Ferguson, hailing him as the next Duncan Edwards and one of United’s greatest ever players. He still has a decade ahead of him where he can become a United legend in the mould of Vidic or Steve Bruce but he, like Smalling, has to eradicate the errors, and like Evans, stop getting injured. Because he puts his body in the wrong position when he tackles, he often comes off worse in 50-50 challenges and can often endanger himself rather than the opponent.

A quarter of last season’s clean sheets were completed when Ferdinand and Vidic were paired at centre-back. For any big game, the two were chosen, not just by Moyes but by Giggs after and Ferguson before. They were Europe’s finest partnership for a decade. Although van Gaal correctly decided against renewing Ferdinand’s contract, it is tempting to suggest that he would have like to renew Vidic’s. He does not have the problem of fazing either player out. They are gone. He now needs to work out whether the three that are left are good enough for him or if he should invest elsewhere.

Young, British yet experienced also, van Gaal has a trio of centre-backs who are better than the three he had at the World Cup. They are a trio who have all shown great potential yet have all deteriorated recently, losing confidence in the process. It is up to them now to take their opportunity and prove that it would be more profitable to stick with them than to buy elsewhere.