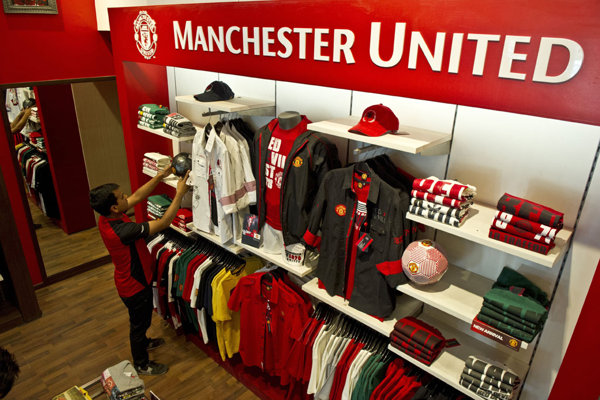 The location was different – the United States instead of Asia – but the message was the same: Manchester United is the biggest club in the world. It can sign the world’s best players. It would be willing to pay £60m or more for the right player. Top players want to sign for the club. As Ed Woodward fed the media the exact same sales pitch twelve months ago the fans felt optimistic that his words would be followed by action. The new Sky TV deal had kicked in, providing Premier League clubs with an extra £60m+ of annual revenue, United’s commercial department was rolling out a myriad of new and imaginative streams of income and the club’s debt, once a huge millstone around their necks, was now becoming less of an issue. United were champions and whilst Sir Alex Ferguson had retired and been replaced by David Moyes there was real optimism that a number of talented, high-profile players would be happy to take the cash and be part of a new era at the club. As we are all well aware, that did not happen.

This year, Woodward has spoken of having learned harsh lessons and intimated that the fans should ‘watch this space’ with regards to new signings. His words have been met with far more caution than last summer and United’s executive vice-president has again put pressure on himself to deliver World Class footballers, halfway through a summer in which he and the fans have again had to watch the best players move elsewhere: Sanchez to Arsenal, Kroos and James Rodriguez to Real Madrid, Lewandowski to Bayern, Suarez to Barca, Fabregas and Costa to Chelsea. Instead, United have so far shopped within their comfort zone – Ander Herrera and Luke Shaw arriving from the second or third tier of clubs with whom United have historically done business. There is nothing at all wrong with this. They are fine players and, through necessity and design, the club have been incredibly successful over the last two decades at buying potential and developing it.

The real concern when listening to Woodward’s words is that, as a man skilled in the world of finance, he fails to understand the complex issues that make some of his claims appear inaccurate and over-ambitious. Having a lot of money will open many doors, but it is not the only factor involved in attracting players and the dominance in the transfer market of Real Madrid and Barcelona is built on more than just cash. Location is a huge factor, as are culture, history and glamour. It is a line trotted out cheaply and seemingly in deference to fans and sponsors, but Manchester United is not the ‘biggest club in the world’. The biggest brand maybe, but not the biggest club. Measured on trophies, stadium size, glamour, money and player appeal it is Real Madrid who stand head and shoulders above the rest. The world’s best players don’t care about shirt sales in Vietnam or official noodles partners and the most talented, if they have the choice, opt for Spain; for the culture, weather and the perception that playing for Real or Barcelona is the pinnacle of one’s career. Few turn them down, while United are depressingly familiar with the annual experience of top targets from the continent opting to go elsewhere.

But the question is whether this actually matters? As a young kid growing up watching United in the 1980s it could be argued that the club weren’t even the biggest in England at the time. I had no aspirations for it to be the biggest on the planet, just for it to play attractive football and win some matches. Since then United have grown beyond anyone’s imagination, now seemingly driven by an insatiable desire to be more powerful than any other club and an irrational belief that in many ways it already inhabits that position. It doesn’t and one can’t help wondering if things would be going better on the pitch if there was more focus on signing the right players rather than chasing big names who invariably move elsewhere.

Woodward’s words suggest that appearances and money-making are at least as important as results. Louis Van Gaal has already complained that this summer’s tour is overly demanding and not conducive to proper preparation for the season ahead. One of the biggest mistakes of last summer was wasting time chasing players United could not get rather than realistic targets that they could, wanting to make that first signing a blockbuster in a global game of dick measuring. Listening to Woodward it sounds like little, on the surface has changed, although the early signings of Shaw and Herrera suggest that some common-sense has permeated the club’s offices. One wonders why he chose to put pressure on himself again. It would have been perfectly acceptable to most fans had he simply said that the finances are in place to attain the targets that the new manager had requested and that they would be the right fit for the club regardless of cost or profile. Now, unless a Vidal or Hummels appears, he will once again look a fool. That would be a shame as much has been achieved to rebuild a reputation stained by the failures of last summer. The employment of Louis Van Gaal, the signings of Shaw and Herrera and the new Adidas deal are considerable achievements and the first three appear to have been driven by a new-found recognition that United is about youth and the development of potential. This is Van Gaal’s forte. Promises of superstars and global domination simply weren’t necessary or, for many, desirable.

There is, however, one significant change at Old Trafford from last summer which should help to pull Woodward and the whole club back down to earth. Last year, David Moyes, surprised at his good fortune in getting the manager’s job and beholden to his superiors for the opportunity, was dragged along by Woodward’s grand visions. Louis Van Gaal will not allow himself to be dragged anywhere. In his first week in the job he has criticised the club’s tour schedule and the commercial demands put on him and his players and demanded that significant changes be made to United’s training ground at Carrington. He has questioned the club’s status as number one and intimated that without a successful team on the pitch it cannot be bigger than many of its peers. His stated aim is to uphold the club’s traditions and buy, work with and develop young players. Woodward will not be allowed to prioritise appearances over practicalities, money over a technical vision.

Woodward would be well served to listen and quietly comply. Grand delusions of supremacy and global domination based on shirt sales and fan clubs in Taiwan mean little without a successful team on the pitch. Educated followers of the club know that his words are hollow and that it is on actions that he will be judged. The gaping holes in the midfield and defence still remain and without plugging them, even with Van Gaal at the helm, the team will struggle to be involved at the very top of the table. The new season is now looming and reinforcements are desperately needed. The squad needs young, hungry, talented additions, not necessarily the biggest names. Manchester United is not the biggest club in the world and probably never will be. But does it need to be? By recognising and acting within its limitations, Sir Alex achieved a level of dominance which few could ever have imagined. Woodward should get real and concentrate on the things that United have historically excelled at. That is the road to recovery, not a misguided and ultimately fruitless quest to usurp those beyond our reach. We don’t have to be the biggest to be the best.