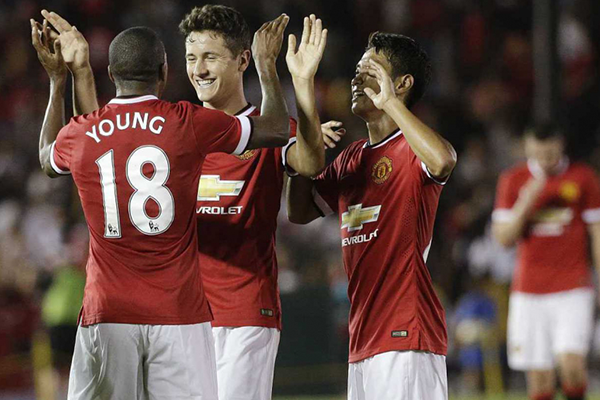 Let’s begin this as fair as possible, and have a laugh. Were we all thinking Louis van Gaal was playing mind games with United supporters already with the starting XI? Was it a 5-3-2, or a 4-3-3, or somewhat of a hybrid?

Who on earth knows what goes on through van Gaal’s mind, but let me be the first to say – I love it.

As Manchester United took a foothold on American soil, it seems near perfect United rediscover their attacking freedom in the United States of America. While critics may indicate Louis van Gaal’s presence with Manchester United may indeed be a daunting one, the Dutchman couldn’t care less. It’s the arrogance, the confidence and bravado of a winner, which could propel United back into it’s good standing in the Premier League and Europe.

United began the reboot of their brand, with a gold crested Chevrolet logo across their chest against the Los Angeles Galaxy on a beautiful evening at the Rose Bowl. And while many anticipated the new era of van Gaal and Manchester United, the time of which the match was slated was near exhausting, 11pm EST for those on the East Coast, while I can only imagine how those abroad were up to the wee-hours on a day where work will take a back seat.

Then again, as van Gaal did not dally around in his press conference, he wouldn’t do that either in his starting XI choice. Barring a few pending transfers, I’d imagine this’ll be close to the starting eleven for the reds to being the Premier League season. And whilst it kills to see Ryan Giggs sitting on the bench, the fear factor has set in.

In the previous 12 months, there wasn’t a fear within the United squad if they chose to sit back and let the game come to them. The fear of experiencing the hair-dryer treatment under Louis van Gaal are ever present, and whilst we’re only in the first match of the preseason, it’s quite understandable why the Dutchman rose from his foam seat to direct traffic, with an utter disgraced look on his face, then quickly transitioning back to a smile as he sat back down.

It would appear United will be in an adjustment period with a defensive line of three, as Robbie Keane was quite able to slip through Jonny Evans, Luke Shaw and Chris Smalling. Evans who has taken a back seat to Rio Ferdinand and Nemanja Vidic through the years, has now been thrusted into a key role in the United defense. However, should Evans struggle whatsoever, Louis van Gaal will not change his system; and has quickly made it clear if a player does not fit a particular system, he will not change it.

Defence aside, Danny Welbeck notched the first goal of the van Gaal era courtsesy of a brilliant individual skill from Juan Mata whom was fouled in the process. Welbeck took the chance early in the 13th minute, beating the keeper low to the far post. After tallying only 10 goals in 36 matches in all competitions for Manchester United last season, Welbeck will need every bit of added confidence he can get to lead the younger generation of reds into the limelight.

The confidence within the United squad was quite refreshing in all honestly. Red shirts constantly adding pressure, tidying up the midfield and numerous five yard passes within the midfield between Ander Herrera and Juan Mata allowed for a more free flowing style of United play – the United play of old. There wasn’t a hopefully 70-yard ball left wandering into the stands of the Rose Bowl stadium, instead there was patience. A refreshing patience, where reds aren’t afraid to take a man on, or make a telling run back on defense nearly 70-yards that Wayne Rooney conducted.

As United neared the end of the first half, it was Wayne Rooney who confidently stepped up to the spot to notch the second goal of the match. After a handle in the penalty area, it was Rooney who immediately took the ball, stepped to the spot and hit a perfectly placed penalty into the corner of the netting. And not even five minutes later, it was Rooney again who capitalized on a Galaxy defender’s error and walked in United’s third of the match before the break.

And in typical preseason fashion, Manchester United made nine changes, while Bruce Arena put an entirely new XI for the Galaxy. The pace quickly took a turn in the second half, a far slower one. One of the brightest spots in the second half was surprisingly the inclusion of Ashley Young. Young could be one of the “X” factors for United this season should be decide the get chalk on his boots – and proved right after only 20 minutes with a telling ball driven low into the box to Reece James who notched United’s fourth of the match. And then, from there, the balls were flying into the back of the net to have United finish 7-0 on the evening.

In all honesty, it was quite an impressive first 45 minutes from Manchester United. And whilst it was only a mild glimpse of what is to come for the reds, it appears the midfield still needs an enforcer with Herrera and Mata more free flowing in the middle of the park. Surely, Darren Fletcher will be used more for defensive duties; however, as he ages it’d be unfair to indicate he’d be a first team regular week in and week out. And so the Louis van Gaal era begins, and continues – on a positive note.

If you missed the game we have embedded videos of the first and second half below. Make sure you watch them before YouTube remove the content.