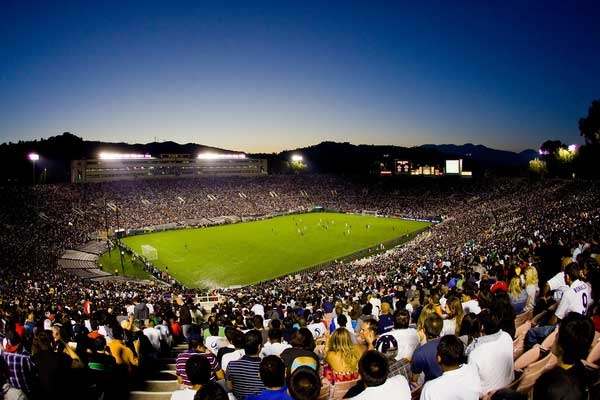 One thought reigns supreme as Manchester United’s inaugural preseason match begins in the Rose Bowl in Los Angeles looms – are we there yet? Louis van Gaal’s men touched down in California to a heroes welcome despite a seventh place finish in the Premier League last season. But the breath of fresh air van Gaal’s presence brings, coupled with the United States’ booming fever for Premier League football will likely see every stadium along United’s month-long tour filled to the brim.

Tears are meant to be shed, tackles are meant to be won, and heartbreak is bound to happen. As Manchester United take the field at the Rose Bowl, a few grown men are set to shed a tear or two as the reds will be in front of some for the very first time. Magical moments of life long fulfillment will culminate on July 23rd as United take on the LA Galaxy led by Robbie Keane, and it’s a moment that may very well be the second best day of some men’s lives, only behind the birth of their children.

At the Rose Bowl, it’s more than Manchester United and the United States supporters, it’s about the Louis van Gaal reign. The United States will be the beginning of another new era, one which will hopefully play out quite differently than that of the previous short-lived season in turmoil that was last year. And while Old Trafford may be the cathedral of all that is football, Los Angeles supporters will look to break through the two-hour traffic induced by construction to live days of their most wild imaginations.

The air is as brisk in LA as the new era of Manchester United. As van Gaal returned to Old Trafford for less than 48 hours, the certainty and confidence he’s already instilled within the United brand is something of legend.

The local Manchester United Los Angeles chapter, or MULA, have been awaiting this moment for quite some time, as United are make their appearance back in the United States. Understandably, emotions will be at an all-time high as the Rose Bowl is in their own backyard. And needless to say, the 4 a.m. wake up calls will be postponed for about another month.

Clearly, the best part of a LA United supporter has to be the beautiful weather; weather that Old Trafford doesn’t see on a regular basis. Yet joking aside, as reds rally throughout the country for United’s preseason tour, knowing there are hundreds of others waking up, leaving families and joining fellow reds at local pubs is playing up to be quite memorable. Whether it be two, three or 100 people in a bar, the roller coaster of emotions will be cherished by all.

For those who haven’t been to Old Trafford, watching the biggest club in the world live, in person, has played through their minds hundreds of times. The same route Manchester United players took down Santa Monica beach has now been relived by hundreds of supporters just waiting for a brief moment with the likes of Wayne Rooney, David de Gea and the youngin’s who they may not have a clue are if it weren’t for the crest on their chest.

If asked to rally reds in the Los Angeles area 10 years ago, it would be a feat to gather even a dozen die-hards, not because of the fact the traffic is near deadly at points. However, with the addition to Javier Hernandez in 2010, reds emerged from the depths.

The general consensus among a few MULA supporters like Beto Gonzalez is that, “If I ever go to Manchester, I’d probably die of happiness.” Luckily for men and women like Gonzalez, United are now in their backyards. The Rose Bowl, Ann Arbor, Fedex Field and more will be taken over by loyal stateside supporters, some far more knowledgeable than others – but United will surely feel at home.

If the worst thing about being a Los Angeles supporter during the Premier League season is a 6 a.m. wake up call, and a 7 a.m. local pint, then so be it. With pints flowing, men and women belting at the top of their lungs, MULA supporter Art Gonzalez indicates it’s all part of the routine. And then again, the routine becomes quite easier with a rowdy bunch surrounding the area.

Whether traveling alone or with a group, the Rose Bowl is certainly going to be filled. Those traveling from overseas to those domestic supporters will pile into the Rose Bowl in hopes of a glimpse of magic, a photograph, the ambiance and most of all, their beloved club.

While baseball and American football continue to belittle the United States supporters of the true football, the preconceived notions of feeling “crazy” for supporting football are now far distant thoughts. A once feeling of weirdness, strange and unhealthy support of a Manchester United supporters in the states has quickly transformed into a normality.