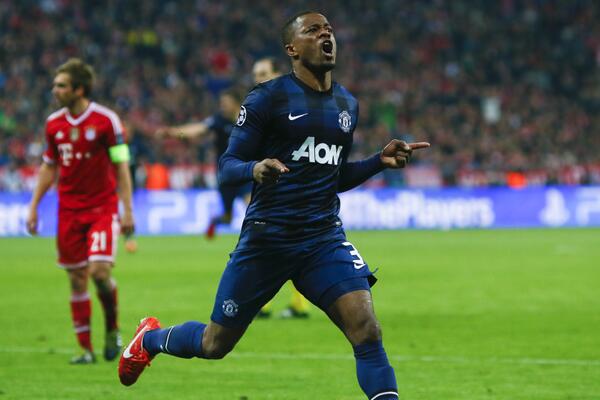 Patrice Evra, who followed Nemanja Vidic in the captaincy stakes, has followed in the Serbian’s footsteps once more by ending their 8 year associations with Manchester United by taking in one final payday in Italy.

Evra’s protracted move to Juventus was finally signed off on Monday afternoon, leaving Luke Shaw to be (upon writing) the unanimous first-choice left-back at Old Trafford.

Evra’s departure has played on the heartstrings of many United fans, not so much from the playing perspective, left-back has plainly been one of our biggest Achilles heels in recent times with Paddy’s French limbs running out of va va voom, but as far as the whole package is concerned. It would be crass to downplay his other qualities- he, like the previous Old Guard triumvirate who have recently departed (Rio, Vida and Giggsy), were more than just players kicking a bit of pigskin on a Saturday, they were incredible presences and voices in the dressing room by all accounts. It is almost bordering on cliche, judging by the amount of eulogies that I am subsequently adding to, but Evra got what Manchester United meant to our supporters. When Nemanja Vidic lost the captaincy in gut-wrenching circumstances in Basel, Evra took on the added responsibility which is testimony to his character as older British heads with vaster experience such as Giggs and Ferdinand were overlooked to marshal on the field.

It is this resolution and fortitude that has seen Evra through some dark places whilst in Manchester. Whether it was the incipient homesickness, death of loved ones or getting vilified for being the innocent victim of racial abuse, Evra came me out of it all on the right side and as such was the ideal understudy with the armband in Vidic’s absence.

Conversely, this stern backbone and obduracy was born from an unmerciful baptism of fire. His introduction to English football was bull-like with Evra holding a red cloth. There was no easy bedding in period, as Sir Alex Ferguson atypically went against his grain and entered the January transfer window for Evra and Vidic, meaning the fixture schedule was naturally relentless.

His debut was not against your usual relegation cannon fodder, but city away from home. Truth be told, Evra had an absolute nightmare. Trevor Sinclair of all people made him look amateur and he was taken off at half-time. At this point Evra might have thought about packing his bags and getting on the next flight back home, such was his ordeal.

In his first interview, he was asked how he was settling into Manchester life, his response was brutally honest- something that has set Evra apart from some of his team-mates, “I have not got accustomed to English life. The food is truly disastrous and it rains all the time”.

Despite the initial quibble that a bacon butty was not exactly a baguette smeared in Boursin and it sometimes rains in the Costa del Salford, it has been Evra’s ability to overcome various obstacles and his sticking power in the face of adversity that has set him apart from other foreign imports at United. Famous examples of this are the Luis Suarez race row and playing in a derby just hours after his father had passed away.

The celebrations when United beat Liverpool and Suarez after the race row verdict were monumental, Patrice doing a lap of honour and clenching his fists in front of the guilty Uruguayan and the adoring Stretford End. That was Patrice’s moment, and we all still savour to this day: the raw emotion, the rallying of the crowd, it was a moment that sums up Evra as a person- passionate, an understanding of our core values and DNA and a leader.

Evra, in his prime, was the best in his position. Call it bias, but he pipped Ashley Cole to the title because of his greater attacking qualities, they canceled each other out defensively. Evra’s energy down the left in his pomp, with his raiding runs aiding Cristiano Ronaldo to find room and cut in and shoot was a joy to behold and the two of them terrorised opposing right-backs during that golden spell between 2007 and 2009.

David Moyes’ spell at Old Trafford is hardly looked on with any great fondness, but Evra provided us and him with his best moment in his beleaguered time in charge. That rocket from the edge of the Bayern Munich area which crashed in off the bar was one of the great goals from the most unlikeliest of sources. It was a goal that made us all believe that the all-conquering Bayern Munich domestically could be beaten (for around 30 seconds). Although it was incredibly too short-lived for our liking, you will always remember who you were with and where you were when you saw Evra wheeling away kissing the badge in celebration, the pandemonium and euphoric was unparalleled. Later, Evra said that goal was in memory of the Busby Babes, who were remembered by players, staff and fans alike ahead of that crunch second leg in Bavaria. That just highlighted the class of the man, he has to be one of the top foreign imports in terms of ability and professionalism.

So all that is left for me to say is merci beaucoup for everything Patrice. You have been a wonderful servant and a terrific player for Manchester United in these 8 years.

He says he leaves with a heavy heart, well I’m sure the feeling is almost universally mutual.