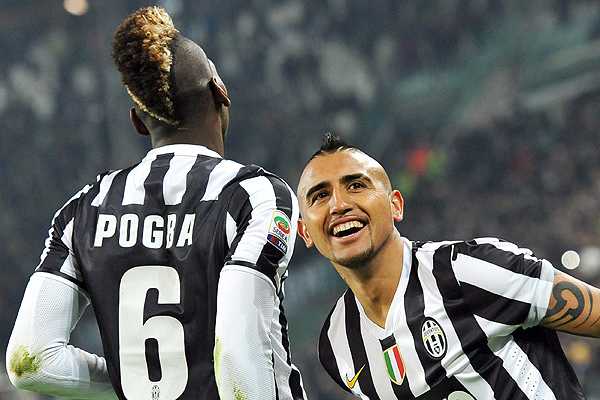 We caught up with Juventus fan and football writer Adam Digby to discuss matters Juventus since both clubs are featuring alongside one another regularly in the gossip columns.

Digby’s work has previously featured in Four Four Two, In Bed With Maradona and the Eight by Eight magazine. He’s a match goer that feels strongly about the importance of Arturo Vidal.

Hi Adam. Manchester United and Juventus are two renowned football clubs with rich histories. Having met 8 times in the Champions League, you could say that we’ve been through a lot down the years, most notably the semi-final in ’99 which I’m sure you won’t want to be reminded of.

Anyway, Arturo Vidal and Patrice Evra are names doing the rounds at the moment but before we get to the latter, elaborate on the importance the Chilean holds at the Turin based club?

Thanks for the reminder Dale, that concludes this interview!

Joking aside, it is impossible to understate the value of Arturo Vidal to the club. Basically, he is this Juventus. People rhapsodise over the transformation under Antonio Conte, the effortless brilliance of Andrea Pirlo, or even Gigi Buffon’s eternal consistency and leadership, but they all overlook the fact this team is moulded in Vidal’s image.

He’s the overall leading goal scorer of the Conte era, he came second in Serie A in total tackles last season; he’s the textbook definition of the complete midfielder. Right now he might well be the very best in world football and he’s only recently turned 27. To sell him now would be to sacrifice the present and, much like Manchester United, Juventus are very much a club who must win today. Unthinkable.

Every summer Nani is linked with a move to the Serie A. With Juventus likely to miss out on Alexis Sanchez, despite of a supposed agreement made prior to the World Cup, would you take him at Juventus now?

To put it bluntly: no. Am sure you – and your readers – don’t need me to tell you how infuriatingly frustrating Nani is, and I’d hate to see that on a regular basis in Turin. Juventus own exciting Italian winger Domenico Berardi, who I believe is already a better player than the Portuguese winger, and it seems Juan Iturbe is going to be wearing black and white very soon. Both are better options than Nani, a player almost every Juve is happy to see remain at Old Trafford.

There were many United fans calling for Antonio Conte to replace David Moyes as manager, but we acted responsibly fast to appoint Louis van Gaal. How do the Juve fans make of the job he’s done so far?

He’s been a revelation. Conte adapted his tactics to suit the players at his disposal, switching to play three in central midfield to accommodate Vidal, Pirlo and Claudio Marchisio. He then made the three-man defence fashionable again, his formation dominating domestically. Sure he’s stuttered in the Champions League, but he’s only had two seasons in the competition and, much like Sir Alex Ferguson in the mid-1990’s he needs time to adjust.

Also like the retired Scot, he has a pathological desire to win, a drive that infects both the players and every aspect of club life every single day. His insatiable appetite for trophies and improvements is infectious, and Juve are very lucky to have him.

Manchester United undoubtedly got the best out of Patrice Evra, who looks set for a switch to Juve. Even with that in mind it still saddens us to see him leave. He was one of those that got what the club was about and related brilliantly with the fans because of that. Will he start for Juventus next season at left back?

I guess that depends on the formation, as it’s difficult to see him displacing Kwadwo Asamoah in the wingback role. In a flat back four – and when the Ghanaian goes to the AFCON in January – Evra’s veteran savvy could prove invaluable. He’ll also be another leader on the pitch and in the dressing room, one with the European experience many in the current squad lack. Should it eventually happen, it’s a smart signing in my opinion.

Although Paul Pogba is a fantastic player with real potential, his exit and comments which followed angered United fans. Do you think Mino Raiola is a bad influence for the French international?

Any fan base would – quite rightly – be unhappy to hear an unproven youngster berate their club for events during his time there, and I don’t blame United supporters for their view of Pogba. I also understand the player’s point of view however; it must have been incredibly frustrating to see opportunities to play handed to lesser talents after the promises he was made.

Mino Raiola is a very good agent for his clients, putting them in the best position to win and getting them the maximum income he can at the same time. It must be awful to have to deal with him on a regular basis, although he was Pavel Nedved’s agent, so Juve have something of a soothsayer in their midst in talks with him.

Will he stay in Turin long term?

Probably not. Like many non-Italian players he is likely to want to test himself elsewhere at some point and the lure of a lucrative deal with a Premier League side or even Paris Saint-Germain seems highly probable. It might not be this summer or even the next, but I don’t imagine he’ll retire with Juventus.