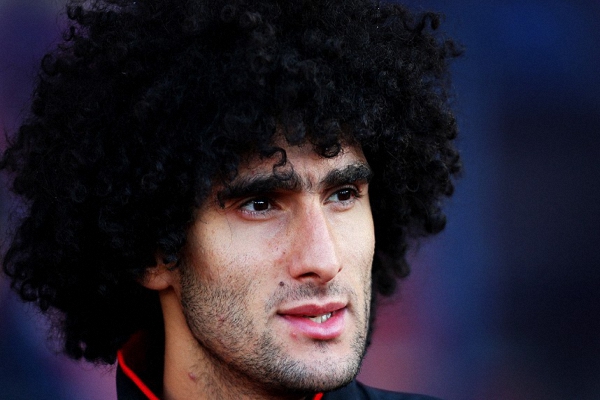 According to Ian Ladyman of the Daily Mail, Louis van Gaal does not think Marouane Fellaini is good enough for Manchester United, therefore plans to sell the midfielder once the World Cup comes to an end.

Methods of communication have been put to use between Van Gaal and Ed Woodward ever since the Netherlands squad touched down in Brazil. The pair have been over and back with one another discussing incoming targets and who should go through the exit door at Old Trafford before the summer transfer window closes. The likes of Tom Cleverley, Ashley Young and Marounane Fellaini have been speculated as players en route out of the club while there is an array of potential signings.

Going back on topic, Fellaini was brought in on deadline day as David Moyes’ first signing. Many of us were certain at the time that he would be an unmitigated disaster at United and one of financial confusion when you consider how Woodward payed over the odds a few days after the transfer clause had risen.

Others got excited by the news and nobody could blame them at the time either. United went the entire summer without a transfer, having wasted weeks beyond weeks on Cesc Fabregas and Thiago Alcantara individually. Nothing was working out and Woodward looked a small fish inside a gigantic pond. That alone was completely down to inexperience but at this level it was another mistake easily avoided.

What the club will find difficult now is making anything near the £27million that was spent on Fellaini. If a buyer is not immanently found, it is unlikely that the Belgium international will join United on their two-week tour of America that begins on July 21, meaning there is little to no chance for him to make a better impression on Van Gaal.

It could be argued that Fellaini deserves another season at the club but it’s just not going to happen. Not when there’s a manager of pure football philosophy as opposed to hoofing the ball up the pitch and hoping for the best.

In conclusion there is no point feeling sorry for Fellaini. He’s not a player of United standard and when you consider what he earns at the club per week, the only solution is to get rid.