For the past five years, Manchester United have been crying out for new blood in central midfield. We’ve seen the likes of Arturo Vidal, Joao Moutinho, Javi Martinez, Xabi Alonso, Javier Mascherano and Yaya Toure all move clubs in that timespan while we have stood by and brought through Tom Cleverley, lost out to Juventus on Paul Pogba and seen the retirement of Paul Scholes (twice!).

In the last three transfer windows alone central midfielders Thiago, Matic, Fernando, Fernandinho, Ivan Rakitic, Illaramendi, Strootman and Paulinho have all moved clubs and Manchester United signed none of them. Louis van Gaal’s appointment though seems to have changed the clubs mentality towards transfers.

Last summer United finally made a move for a midfielder bringing in Marouane Fellaini, although his performances were poor in what was an awful campaign for both club and player. Michael Carrick’s transformation from player of the year to passenger in games in just one season showed us that despite that deal for Fellaini, we’re still scarily short in that department.

Last year was a nightmare, but one thing David Moyes did well with was identifying William Carvalho as a potential Manchester United player. There’s no doubt about it, this footballer will be one of the top defensive midfielders in Europe in the next two seasons.

Carvalho broke into the Sporting side last year after a season-long loan deal in Belgium the season before. Carvalho’s introduction to the Portuguese league saw a media frenzy around the 22 year-old. Portugal had a new star. His imposing physique, positional awareness and ability to win the ball back high up the pitch were key to Sporting’s success as they broke the dual-dominance of Porto and Benfica to gain Champions League football for the first time since the 09/10 season.

Better known as William, he joined Nemanja Matic and Fernando among the elite players in the division, coming on leaps and bounds in his first campaign. Matic and Fernando have both joined Premier League clubs in the last 6 months and Carvalho is more than capable of following them over.

Watching him play, he doesn’t look the most mobile. He has a unique running style where he takes short strides and tends to keep his elbows tucked in. It looks hilarious, but I suppose it’s effective.

With the Portuguese league considerably weaker than other divisions in Europe it is incredibly difficult to compare to Europe’s other elite midfielders. However, with the World Cup having just gone it’s slightly easier.

Carvalho played just one-and-a-half games at the World Cup much to the dismay of every Portuguese fan and media personality. Paul Pogba featured in all four of France’s games so far. Using Squawka’s new axis comparison tool, I’ve compared the two midfielders using stats “per 90 minutes”. As you can see, William Carvalho dominates the majority of the defensive statistics. 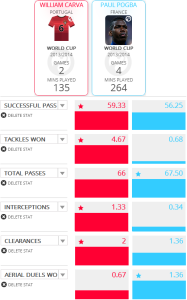 William is a natural holding midfielder. But more than that, he can play football. His composure in tight situations to keep the ball and play it simply is vital to building up attacks. He averages 59 successful passes per 90 minutes with a completion rate of 90.1%. On top of that however, he averages 4.67 tackles per game compared to Pogba’s 0.68. He also averages 1.33 interceptions per game and 2 clearances making his defensive contributions astounding for a team that crashed out in the group stages.

Carvalho has a €45M release clause in his contract and has attracted interest from Monaco, Juventus, Real Madrid and Chelsea as well as Manchester United. While the fee may seem steep for a player with just one full season of first team football, Carvalho is already close to a world class level. Chelsea signed Nemanja Matic and he instantly added stability to a midfield that needed a defensive destroyer. Manchester United are in a similar need. With Fellaini seemingly more comfortable further up the pitch he’s unable to fill that role. Carrick’s positionally excellent, but his form last season dropped drastically. At 33 years of age, he may need to be moved into a role where he is less relied on and used more sparingly.

One thing is for sure, if Manchester United decide to pay Sporting’s reported £30M asking price (which they absolutely should!) then they will sorted defensively in midfield for years to come. Missing out on Carvalho could prove more costly in the long run for our midfield issues than losing Paul Pogba to Juventus two years ago

A midfield trio of Carvalho, Herrera and Vidal next season wouldn’t half be a thing of beauty, would it? Talk about transformation.