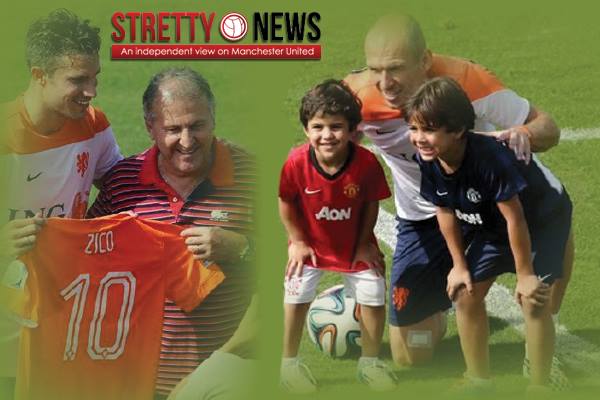 Zico, the great Brazilian of the 80s came to visit the Dutch squad on Thursday. Ordered by his two grandchildren to use his connections, a meet a greet with some of Holland’s biggest stars as they posed in Manchester United shirts brought a smile to Robin van Persie’s face.

Flamengo’s greatest icon is pictured receiving a no.10 shirt alongside Robin van Persie while his grandchildren smiled with Robben. The eldest is named Felipe and the youngest Bruno. They are huge Van Persie admirers and made a request for Zico to bring them along to the Holland training camp.

Van Persie uploaded a picture to his Twitter account after meeting the Brazilian legend. Arguably rated third in Brazil’s all time greats behinds Pele and Garrincha.

A nice fact about Zico is how he lead Flamengo to a 3-0 victory over Liverpool in the 1981 Intercontinental Cup. The fixture was played in Tokyo.