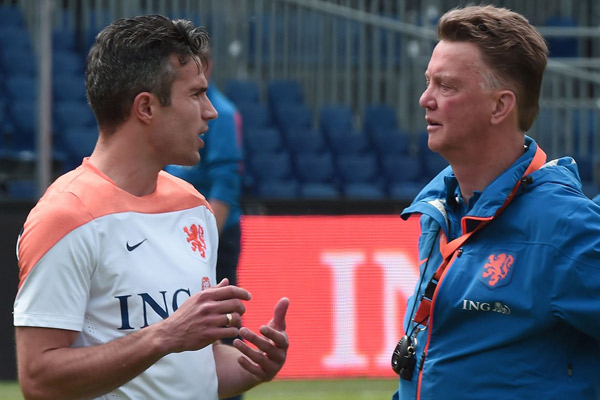 I wanted to avoid writing about Louis Van Gaal until Holland had played at least twice during this glorious, crazy, classic World Cup. His team’s stunning opening 5-1 victory over Spain brought forth a tidal-wave of hyperbole that engulfed both the coach and his players. It was a monumental, earth-shattering performance, result and tactical masterpiece which told us much about the future Manchester United manager. It is safe to say that David Moyes could have managed the Dutch side in that game a hundred times and never produced such a scoreline. In coaching terms, the club are moving from a mere mortal to an ethereal being. However, those familiar with Van Gaal’s previous work as a coach at club and international level will know that whilst he may be amongst the managerial greats, even he is not a miracle worker. As the subsequent match against Australia, a disjointed, dysfunctional and laboured Dutch victory, demonstrated, he can’t always make a perfect silk purse out of a sow’s ear. Whilst this Holland team is built around the power of the collective, without the two truly world-class players who lead its attack, Robin Van Persie and Arjen Robben, it could not and would not succeed. We know from history that whilst Van Gaal makes average players good and good players great, he needs a core of truly exceptional talents. The contrasting performances of the Dutch so far this World Cup should send a message to Ed Woodward that he cannot sit back and assume that LVG will elevate an average United squad to greatness. He improves players, the end result dependent on their starting points. The most direct route to success is to give a fine manager a balance of great players and dedicated team/squad men and it is achieving that Utopia which should be at the forefront of the minds of those in the Old Trafford boardroom.

There can be few Manchester United fans who now question the appointment of Van Gaal as the club’s manager. At the time of his coronation not many queried the Dutchman’s record as a coach – titles in Europe and three different national leagues, achieved alongside a commitment to developing young players – but there were justifiable concerns about his management style. Were the club blinded by a desperation to appoint the anti-Moyes, an elephantine ego in direct contrast to the Scotsman’s introspection and wide-eyed terror? Van Gaal’s reputation certainly preceded him. And would the new man be flexible enough in his tactical philosophies to adapt to the squad he was gifted? This World Cup has certainly allayed many of those fears.

Recognising the inherent weaknesses in his squad, the former Barcelona, Ajax, Bayern and Alkmaar coach threw out his favourite play-book in the build up to the World Cup and in the opening match against Spain and adopted a counter-attacking 5-3-2 formation to complement his squad and get the very best out of his stars. Against Australia the tactic was proving ineffective so he switched again to 3-4-1-2. Flexibility and the ability to read and change a game are not to be taken for granted. Regardless of the reactionary stories in the press linking United to every young player in the Dutch squad, this is a limited bunch (Van Persie, Robben and Sneijder aside) and so those behind a World Class forward line have been crafted into the an efficient support act. We are witnessing a footballing beehive, the workers dedicating themselves to and sacrificing themselves for their royalty. There are parallels between this Holland squad and that which Van Gaal will inherit at United. The technical ability within both is top-heavy, mostly Indians and few chiefs, and the quality of the players in both is inferior to that possessed by others. The task will therefore be the same: to motivate his very best players and to convince the remainder that they should devote themselves to a season of servitude. With the Netherlands side during this World Cup the Dutchman has shown that he can achieve that with a national squad that has a long, undistinguished history of infighting and egos. At United, with Vidic and Ferdinand gone, there are few powerful characters remaining and basic conditions are in place for a recreation of the balance that is serving Holland so well. Of course, it helps that one of the remaining egos at Old Trafford is smitten with Van Gaal and performing so well for him in Brazil. Enthusiasm, respect and devotion is contagious and Robin Van Persie will no doubt spend much of his summer and the early weeks of the new season sneezing tiny droplets of Louis-love over his United teammates. A squad underwhelmed by the appointment of David Moyes in June last year will be raring to go when they restart training in July and there will be no issues with players failing to buy in to their new coaches methods or tactics. Even the most ignorant amongst them have now seen the professional quality of the man. Thus, Van Gaal is the perfect individual for this moment in United’s history and the fans are excited and intrigued by what lays ahead.

However, the appointment of a coach so well suited to the task at hand should not mean that the club or fans should settle for a low-key summer in the transfer market. The squad, containing gaping holes, desperately needs strengthening in defence and midfield. Better players bring better results, whoever the manager may be. The Dutch, for all their early promise, are unlikely to go on to win the World Cup in Brazil. A strong collective, tailor-made tactics and a few top-class players at the peak of their powers can only take you so far. What we should expect in terms of acquisitions under Van Gaal may, though, be different to the approach that other managers (and probably Ed Woodward) would take. The new coach may well want to acquire one or two queen bees, but it is also likely that they will be accompanied by a number of workers. The news that United are pursuing a deal for Thomas Vermaelen, a talented but injury-prone and desperately out-of-form defender, was greeted with surprise and dismay by many. There is, however, a growing acceptance and trust that Van Gaal will target the correct players to achieve the squad balance that he craves. He has earned the right to acquire whomever he wants and faith in his judgement is growing with each Holland performance. It is fair to say that had David Moyes attempted to buy Arsenal’s bench-warming Belgian there would have been uproar. But the new manager will be allowed to do things his way. He can point to his body of work as proof of the success of his methods in a way which Moyes never could. In short, the Scot had to earn our trust. The Dutchman already has it.

Our concern this summer should therefore centre not on the players that we do sign but the ones that we may not. Van Gaal needs a higher standard of workers and some royalty and it is up to Ed Woodward to deliver. The danger is that United may get the former and not the latter, a scenario which could, to an extent, undermine the new regime before it has even begun. History shows us that the new manager’s methods are not instant fixes and that his greatest achievements resulted from hard work and squad re-shaping. His trust in youth is based on a belief that young players can be easily moulded where older heads may be more resistant and set in their ways. Without patience and round pegs in round holes the Dutchman’s teams can make slow starts, as we saw at Ajax, Alkmaar and Bayern. The contrast in his two spells at Barcelona demonstrate the importance of the right conditions and squad balance being in place for him to succeed. United have a group of players who provide a good starting point, but are some way from the ideal.

With United at an absolutely key stage in their history the failure to provide the manager with the tools he needs to rejuvenate the club would handicap a tenure which, given Van Gaal’s age and contract length, is only intended to be a short to medium fix as the club rebuilds from the ashes of the Moyes era. But, as his Holland team in the World Cup is demonstrating, buy in to his methods and desires and the Dutchman will deliver a team greater than the sum of it’s parts. Having both the players and supporters fully behind a manager at the start of a season is absolutely essential to the success of any campaign. Holland’s performances so far at the World Cup have created a tidal-wave of positivity. If, as has been reported, United were never fully trusting of Moyes in the transfer market, there can be no such reticence to comply with Van Gaal. Get the man what he wants and next year could be very fun indeed.