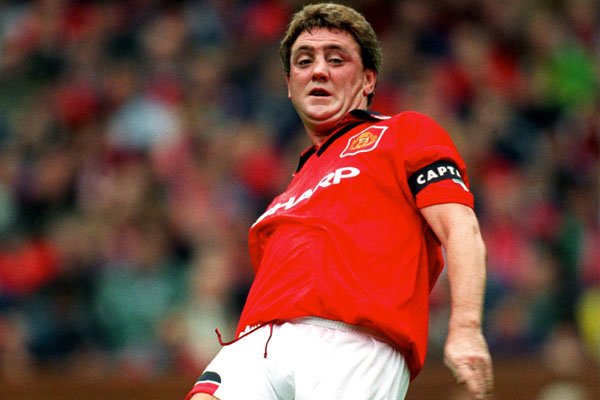 By boasting 100 academy players who have become internationals and featuring more squad players in this year’s World Cup than any other English club, Manchester United have always been represented on the international stage. In an unusual 3-4-3 formation, here is an XI of United greats who have not been able to grace the world’s greatest competition:

Despite being United’s main goalkeeper during the 1960s and 70s, Stepney was unlucky to be behind England’s greatest keeper, Gordon Banks, during this era. Consequently he was only capped once in 1968. The closest he came to a World Cup appearance was in 1970 when Banks was side-lined for a quarter-final with West Germany with food poisoning. Alf Ramsey chose Peter Bonetti to take Banks’ place and it was he who many blamed for England surrendering a two goal lead to get knocked-out. Stepney’s only involvement in the match was being the messenger who has to tell Banks the bad news.

United’s most successful goalies in the World Cup was the 1958 goalkeeper of the tournament, Harry Gregg, and Fabian Barthez who won the competition two years before he joined the club.

Solid defender Bruce is, like Stepney, a United legend not recognised by his country. Despite 414 appearances in a ten year spell that included 51 goals (the same as Roy Keane for example) and numerous medals, Bruce was never considered for England. Unlike Stepney who reasonably had to settle for a place on the bench behind Banks, Bruce did not seem to have too much competition in his position. Though far from being terrible players, Tony Adams and Des Walker were the chosen pairing in Graham Taylor’s failed qualifying attempt for USA ’94.

Unlike his defensive partner Bruce, Pallister did make 22 appearances for England. He achieved the rare feat of winning his first cap whilst playing in the second division for Middlesbrough in 1988. He joined United in 1989 for the highest fee at the time paid between two English clubs. He played six World Cup qualifying games (4 for 1994, 2 for 1998) but his last cap came 18 months before the tournament in France.

Foulkes is fourth on United’s all time appearances list, survived the Munich air disaster and started every single game in three separate seasons but was only capped once for England. He was capped in 1954 but did not make Walter Winterbottom’s squad for the competition in Switzerland.

Regular teammate, left-back Tony Dunne was capped 33 times by Ireland, whilst another full-back high on the appearances list up to the 1950s, Johnny Carey, was also capped 29 times but Ireland didn’t qualify for a World Cup until 1990 so any Irish red before then would struggle to feature in a major tournament.

When people compile lists of players ‘lost’ from the World Cup they are usually considering players who were injured before the tournament, fell out of favour with selectors or played for a country never qualified. The Munich Air Disaster of 5th February 1958 took the lives of eight United players and deprived England of key men for the competition in Sweden. Only Bobby Charlton survived to make the tournament.

From the eight who died, Roger Byrne and Tommy Taylor both appeared in 1954 and were expected to do likewise in Sweden. Eddie Colman, Geoff Bent and Mark Jones had not received a cap. Striker David Pegg had made one appearance so could have been in contention for selection. Liam Whelan had played four times for Ireland.

Powerful and talented Duncan Edwards, who died aged only 21, was the ultimate midfielder and already a mainstay of both United and England’s team. He had been capped 18 times for England and scored four times, including a goal in qualifying for the World Cup against Denmark. There is no doubt that he would have been one of England’s most important players in that tournament.

There are quite a lot of United wingers who have missed out on World Cups so Giggs will have to settle for a central midfield role in this side. As the most decorated player of his generation, it is easy to suggest that Giggs is the best player never to have played in the World Cup. Giggs was the youngest player to appear for Wales, aged 17 when he came on as a substitute away to Germany in 1991. Though adored by United, Giggs was been criticised by some Welshman for missing 18 consecutive friendlies until meeting Finland in 2001. He was capped 64 times.  The closest he came to a World Cup was when Wales lost their last qualifying game to Romania in November 1993 when a win would have secured progress. United striking great, Mark Hughes was suspended for that game. Many believe that Giggs could have played for England as he represented England schoolboys but the legislation at the time meant that he didn’t have a choice anyway. Still, it’s nice to imagine a four of Beckham, Scholes, Butt and Giggs at either World Cup ’98 or 2002.

Probably the only rival to the previous claim that Giggs is the best player not to feature in a World Cup is the player he was most compared to, George Best. Franz Beckenbauer has been quoted as saying just that. Best was capped 37 times for Northern Ireland, scoring nine goals, four of which against Cyprus.  Between 1962 to 1978, they failed to qualify for the tournament, depriving Best of sharing the stage with the likes of Pele or Johan Cruyff, although he did face the great Dutchman in a 1978 qualifying match.

When Northern Ireland did qualify for the World Cup in 1982, topping their group ahead of hosts Spain, 17 year-old Norman Whiteside was both their and United’s star. Best had already finished his stint for San Jose Earthquakes amongst others and was beyond consideration for selection, despite only being 36.

Rapid winger Kanchelskis had already been capped 23 times for the USSR before the break-up of the Soviet Union. After that he chose to represent Russia, rather than the country of his birth, Ukraine, and was capped a further 36 times and should have appeared in America in 1994. However, in a move that was later replicated by Roy Keane in 2002, Kanchelskis lead a player revolt against the national coach, Pavel Sadyrin. He was one of seven players who boycotted the finals due to the manager not being sacked despite being accused of “stone-age coaching methods.” He later stated that he did not regret the decision.

Though he had a turbulent relationship with the French football authorities there was no doubt that Eric Cantona would have appeared for Les Bleus in America in 1994 had they qualified. But, as in 1990, France failed to do so. He made his debut in 1987 but was banned from international selection for calling the national coach, Henri Michel a “bag of shit.” Luckily for Cantona, Michel was sacked and replaced by Michel Platini who chose Cantona for their miserable Euro ’92 campaign that saw no victories. After Gerard Houlier failed to achieve World Cup qualification, new coach Aime Jacquet installed Cantona as France’s captain. However, Cantona’s 1995 suspension for his infamous kung-fu kick also applied to international games. He was never selected again despite spearheading two United title victories on his return. A year after he retired from the game, France were world champions.

England’s 1950 World Cup team did include two United players, John Aston and Henry Cockburn, but did not feature United’s great goal-scorer Jack Rowley. England did have plenty of attacking options in Brazil, such as Bobby Charlton’s cousin Jackie Milburn, FA Cup hero Stan Mortensen and wing wizards Stanley Matthews and Tom Finney. However, Rowley was unlucky not to be a part of the squad, especially after scoring four in an international against Northern Ireland the November before the tournament. He scored two more in five more internationals. Rowley was nicknamed ‘The Gunner’ for his explosive finishing. He scored 211 goals in 424 appearances for United from 1937 to 1954. England could have done with Rowley, losing to Spain and humiliatingly to USA in their group-stage exit.

Some United forwards have been overlooked by England, such as Brian Kidd and Dennis Viollett who both managed only two caps despite domestic success. As one of the Premier League’s greatest goal-scorers, Andy Cole was unlucky not to be capped more than 15 times. Arguably the pairing of Alan Shearer with Teddy Sheringham and then Michael Owen was relatively successful but Cole’s omission from both 1998 and 2002 squads hurt the striker, as shown by retiring from international football when he was not selected for Japan and Korea. Cole made his first four international caps under different managers- Terry Venables, Glenn Hoddle, Howard Wilkinson and Kevin Keegan. Hoddle justified Cole’s exclusion from his ’98 squad due to the argument that he needed six or seven chances to score.