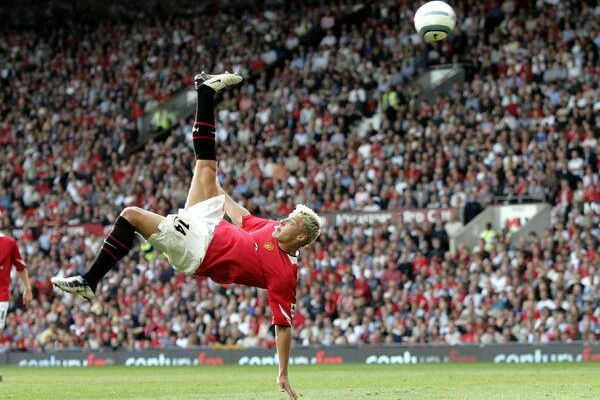 Soccer AM has been a weekend staple for football fans far and wide for nigh-on a decade, but one Saturday morning in 2002, Leeds United’s prodigal son uttered some words that further enhanced his image as Mr Leeds, and would doubtless have poured more petrol on the vitriolic fire that was (long may the past tense continue) the Leeds versus Manchester United rivalry.

When the rather provocative question flashed across the screen, ‘is there one club you would never play for?’, Smith’s undisguised allegiance and attachment to the White Rose side led him to instantaneously declare that he would never don the red of Manchester United, the arch enemy.

Fast forward two years, Leeds are inexplicably (and from a red tinted persuasion, comically) relegated from England’s top tier. Smith is still the local Leeds luminary, upon exiting the big stage, Smith once more reaffirmed his fidelity to the side by publicly kissing the badge and was carted around Elland Road like a messiah.

But much like Robert Ford killing the Wild West’s most infamous and charismatic outlaw Jesse James, Smith likewise performed an unforgivable act of treachery and, much like your modern-day politician, went back on his previous promise, signing for Manchester United in the summer of 2004. Smith went from hero to villain before the Yorkshire could bleat, ‘ee bah gum, we been relegated’. Little did they know that their libertine actually had their best interests at heart, Smith’s transfer saved their bacon, they could arguably have ceased to exist had he stayed onboard the sinking ship. I know, I know, some of you will now be thinking ‘why did we bother?’.

Smith joined the likes of the collar popping King and Rio Ferdinand, that white suit was ghastly wasn’t it, in crossing the Great Divide. At Manchester United, the onus for any player is to hit the ground running, this is not optional nor is there an alternative if you want to flourish at the Theatre of Dreams. The pressure and expectation are cranked up multiple fold however when a player joins the ranks from your supposed bitterest foes. After the big cojones statement that he would never play for United, how would the fans and players alike take to such a brash remark? This trepidation must have been preoccupying him as he set foot in his new surroundings.

The start of Smith’s United career was auspicious, a goal on debut in the curtain raiser against Arsenal was followed by a sumptuous left-footed volley against Norwich at Old Trafford, it was certainly a memorable way to introduce himself to the United faithful, who at the time were skeptical whether to accept him as one of our own.

Roy Keane’s hard-hitting bluntness off the field combined with abating on-field powers and suffering a decimating injury at Anfield (this is a recurring theme of the piece) signaled the end of a fantastic spell at United, he was the captain fantastic, the man you would run through brick walls for. His body no longer being able to afford him to play at his belligerent, dynamic self opened new avenues for Alan Smith. He shared the combative, fiery streak that was ensconced in Keane’s genetics, Ferguson earmarked him as his long-term successor, which in turn with the emergence of a certain Scouse wonderkid called Rooney, his days as a striker at United would be few and far between ever since.

Smith wasn’t exactly setting the world alight with his displays in Keane’s absence, but he was more than useful in nullifying opposition attacks, breaking up play and giving us bite in the engine room. The defining moment of Smith’s United career would wreak havoc in the most lurid and chilling way imaginable. He suffered the traumatising injury doing something that was quintessentially Smith, giving his all with undeniable commitment, blocking a rocket from John Arne Riise with devastating repercussions. The broken leg and dislocated ankle which ensued was truly sickening, much like the distasteful behaviour from the Scouse mob hurling bottles at the ambulance and trying to tip it over.

Truth be told, Smith never recovered from the injury. He never really managed to play with the same intensity and full-blooded aggression that had become the cornerstone of the success that caught the eye of football’s greatest ever manager. To be frank, it was a minor miracle that he managed to cross the white line again, such was the damage caused.

A fairytale moment for Smith came in the 7-1 Italian Job on Roma. Smith scored the second goal, which was truly aesthetically majestic on the eye. A flowing one touch move from back to front ended with Smith caressing the ball into the net, a moment of palpable relief and joy which was celebrated in rapturous style by players and fans alike, if ever there was a popular goal, Smith encapsulated the moment with one measured swish of the right foot.

He followed in the footsteps of red hero Nicky Butt, another holding midfielder aggressive by nature who made the switch to Tyneside, but not with any discernible moments to savour. He failed to find the net in 84 appearances for Newcastle and suffered the ignominy of relegation to further add salt to the wounds.

He has recently signed a deal to play for Notts County in League 1, after seeing his time with MK Dons come to an end, apparently claiming he does not know how much he is being paid and does not care about it one iota. It is testimony to his professionalism and willingness to in a way make up for lost time and continue in a privileged profession for as long as possible.

Yesterday marked a decade since Alan Smith broke Yorkshire hearts and signed across the dotted line at Old Trafford. While he may not be revered and idolised in similar fashion to Eric and Rio, both of whom crossed the Great Divide with fantastic results, Old Trafford looks a trier, someone willing to bust a gut and give their all for the badge on the front of the shirt, Smith certainly succeeded on that front.

It is with regret that our abiding memory of Smith will be that stomach-turning injury at Anfield, the hypothetical million dollar question is whether he would have gone on to flourish in that holding midfield role and potentially fill the void left by a certain Irishman?