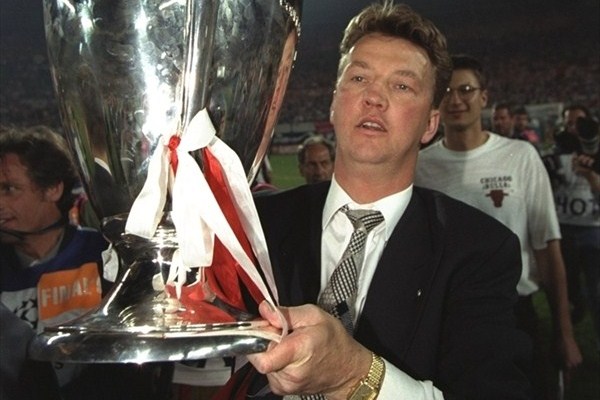 Kevin, who writes about football for BeNeFoot and follows Ajax, tells Stretty News what Louis van Gaal was like as a player and manager in the Eredivise.

The roots for Van Gaal’s ways of strictness and structure were laid early on his life, growing up in a big Catholic family in Amsterdam. Schooled by priests, he was quickly taught the ways of discipline and hard work.

His career began at local side RKSV De Meer, featuring as a bustling, physical midfielder. He ended up joining the great Ajax, of Cruyff, at the age of 20, not even playing a senior game before joining Belgian side Royal Antwerp. From there, his football career took him to Sparta Rotterdam, via Telstar, where he would end up playing 248 games. Alongside him in the dressing room were future internationals like René van der Gijp and Adri van Tiggelen, as well as future Australia manager Pim Verbeek. After his spell at Sparta, van Gaal would eventually roll into the managerial game at AZ.

In 1988, Van Gaal joined Ajax once more, acting as an understudy for Leo Beenhakker. Three years later, Beenhakker left his position and Van Gaal was appointed his successor. And what a successor he would prove to be.

His reign at Ajax took the club to great heights, heights not experienced since Johan Cruyff had departed from the Dutch capital. His first major prize was the UEFA Cup in 1992, fielding a side featuring a deadly Dennis Bergkamp and in-form Wim Jonk that beat Torino in a two-legged final. After that his greatest feature, next to 3 league titles, followed; the 1995 Champions League.

In the 1994-1995 season, his young Ajax, not even measuring an average age of 25, stayed unbeaten an entire Eredivisie season. Under the lead of Finnish legend Jari Litmanen, they reached the final in Vienna versus Milan. After a tense game, Patrick Kluivert eventually brought relief in the 85th minute by toe-poking Louis van Gaal to his very first Champions League win. It would prove to be a historic one, as it would be the last Champions League Ajax have won to this day.

In the following season, his side yet again reached the final of the highest echelon in European football, eventually losing out to Juventus on penalties. As his contract ended at Ajax, so too did one of their most successful periods in which the club played a highly attacking style, featuring many young Dutch internationals which came from its own academy. Players like Davids, Kluivert, Frank and Ronald de Boer, Seedorf and Bogarde were all given their debuts by Van Gaal, in essence creating one of the best Dutch squads the world has ever seen in 1998.

Following his highly successful stint at Ajax, many clubs were chasing Louis van Gaal but he eventually found himself ending up at Barcelona to try and replicate his Dutch success in the Catalonian enclave. Despite his achievements, he had many run-ins with the Spanish press and players alike, particularly with Brazilian playmaker Rivaldo. After winning 2 league titles in Spain, he said goodbye to his “friends of the press” in 2000, after losing the title against Deportivo de La Coruña.

Van Gaal’s next adventure would take him into the complicated world of international football, taking charge of a Dutch national team that had ended up 3rd at the previous World Cup in 1998. It featured many of his former acolytes and he was expected to qualify himself easily, only having to challenge Portugal for the first place according to many.

But Oranje began badly, drawing 2-2 against Ireland at home. What followed was a series of poor results, which decided Van Gaal’s faith in Ireland on the 1st of September 2001. In a crowded Lansdowne Road, his side failed to qualify for the World Cup for the first time since 1986, losing 1-0 to the Republic of Ireland. 5 months later, Van Gaal stepped down, with Dick Advocaat replacing him at the helm.

Following his failure with Oranje, Van Gaal was shot to bits by the Dutch media and lost a lot of his credit with Dutch fans. It was at that moment, when he was down and out, that a curious appointment took place. Barcelona, the club that he had left only 2 years ago, returned to ask for his signature, on the fore speech of Joan Gaspart.

His period with the Catalans proved to be another stumbling block for the Dutch manager, though, instead of a return to the highs; eventually being fired with his side on the 12th place in La Liga, 20 odd points behind league leaders Real Sociedad.

Sick of management after the recent lows, Van Gaal then made his way back into Amsterdam again; yet again replace Leo Beenhakker, only this time in the board room. Louis turned sporting director, introducing a new educational plan that’d have to strengthen the set-up of both the senior and youth sides. He was coupled with former Barcelona-defender Ronald Koeman as a manager, to execute Van Gaal’s ways.

During the season, this combination of hotheads proved to be an unworkable pairing though. Koeman complained about Van Gaal being far too involved with the senior squad, while Van Gaal was getting sick and tired of Koeman’s inexperience and lack of control. When Ibrahimovic was forced out of the club by Van Gaal, that was that for Koeman.

This eventually escalated in prolonged talks with the board, discussing both Van Gaal and Koeman’s position and the way to go. When Van Gaal eventually suggested he’d be the only man responsible for transfers the board rejected his suggestion. Louis decided to leave, angered by the lack of trust he was being given.

Eventually, his real return would be on the touchline. In 2005 he took charge of AZ Alkmaar, a club steam-powered by the millions of Dutch banker Dirk Scheringa. With a strong side, being selected by former manager Adriaanse and moulded into a team by Van Gaal, he eventually finished second after a long and tiresome season, playing exquisite football on top of that. His side also reached the semi-finals of the Dutch trophy and only just missed out on Champions League play-offs.

In his second season, he nearly bettered the feat of his first season; missing out on the title during the last playing round and losing the cup final against Ajax. On top of that, his side reached the quarter final of the UEFA Cup (due to wins versus Newcastle and Fenerbahce) being eliminated by Werder Bremen.

His third proved to be the hardest year Louis had in Alkmaar, holding a relegation spot at one point in the season. When things started to look grim for his position, he even announced he’d leave at the end of season. A few days later, he corrected his stance and said he’d evaluate his decision come the end of season following a barrage of pleas by both fans and players to stay.

Deciding to stay in the summer, this season would be his renaissance, his return to glory. In a glorious season with AZ, he won the title and assured the club’s placement in next season’s Champions League. With the league win, his stocks had risen higher again and he was now under the view of many sides. He eventually struck a deal with Bayern Munich, leaving AZ for the German top club in 2009.

At Bayern, he’d win the league in his first season, as well as the German trophy and reached the final of the Champions League, losing out to Inter Milan. His control on the group of players was quickly diminishing in the following season through, having a few run-ins with Franck Ribery particularly. He left the German champions in March 2011, after a run of disappointing results in the league.

Later that year, Louis would pop up as a highly controversial face in Cruyff’s Velvet Revolution at Ajax. After Ajax’s failures in the Champions League, Johan Cruyff took up the gauntlet to fight Ajax’ board over the control of the club. Following a long struggle, Cruyff eventually ended up on top and formed a group of commissionaires that’d be responsible for executing his new plans and had to form a new board. This group consisted of Steven ten Have, Marjan Olfers, Edgar Davids, Paul Römer and Johan Cruyff himself.

The rest of the group would eventually hire Van Gaal behind Cruyff’s back, not informing him of the decision and signing Van Gaal right away. Angered by the decision, Cruyff went to court to get Van Gaal’s new deal dismissed and was successful in this. This meant Van Gaal only was Ajax new director for a few weeks and saw him without a job again.

In the summer of 2012, Van Gaal was then introduced as the new Holland manager to execute his revenge for the failure of 2002. Under his lead, Holland managed to cleanly qualify for the World Cup 2014 in Brazil. He was also responsible for the debuts of many young player, introducing names as De Vrij, Martins Indi and Maher in the first few games under his wing. With a new, young and fresh Oranje, he’s going to finally realise his dream to play a World Cup and hopefully surprise both friend and foe.