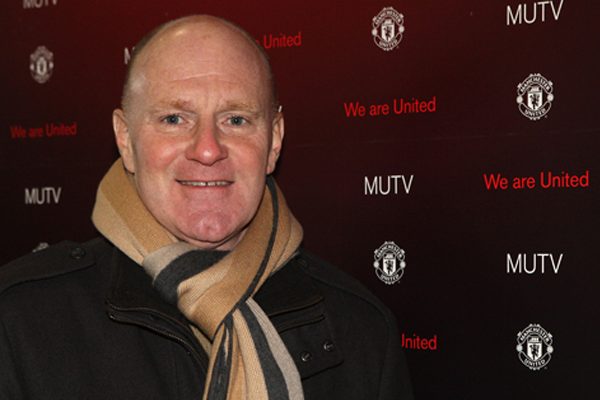 Andy Ritchie may not be a household name to the younger generations of Manchester United supporters, but his electricity on the Old Trafford pitch could not be tamed during his playing career. Ritchie amassed 42 appearances and notched 13 goals during his three year stint with the reds (1977-1980) before being sold to Brighton & Hove Albion.

I’ve nowt personally met Andy Ritchie before, but I find a strikingly similar familiarity between he and I – our eyebrows.

If looking closely, Ritchie is a man who squints ever so slightly in order to keep the sun out of his eyes – almost as if he could look right into the sun and not go blind. With umbrella eyebrows (which I so beautifully sport as well) it gives Ritchie the menacing look, who at his very core appears to be a light-hearted and genuinely tender man. Just do not cross him if you just so happen to be a former teammate of his, then watch your heels, head and sanity because Ritchie could drive just about anyone crazy with his nonstop motor and determination.

Eyebrows aside along with a relatively short career with Manchester United (and however upset I may be after re-watching highlights from his appearances), seeing Ritchie play for Manchester United and against them brought chills up my spine.

Understandably as nearly every former footballer remains tight-lipped about dressing rooms spats, training ground incidents or too many pints at the pub, Ritchie does not shy away from sharing an anecdote which will surely bring a chuckle. And when asked about the anecdotes he could share, Andy Ritchie laughed as if he was a man holding back a chamber of secrets.

“We set up for a free kick down the righthand side,” Ritchie indicated as United worked a series of passes before getting the ball into the penalty area.

“This went on for 25 minutes or so and no one had scored a goal. Dave Sexton said, ‘anybody got any question?'”

As as lightening McQueen chimed in, it should be he who should be doing the scoring. Albeit the manager should know how to make his methods more effective, no? See video for more.

Ritchie was a man with a purpose on the pitch. After all, he did begin his career on a high-note after notching a hat-trick against Leeds United during the 1977/78 season at only 18-years-old. Shortly thereafter, the Manchester born schoolboy turned apprentice, turned professional notched another hat-trick a year later against Spurs. There was promise.

During his playing years for Manchester United, he sported a long, defined face with plenty of integrity strapped into his trainers. Though his natural dirty-blond locks have transitioned into a short stubble, Ritchie’s eyes still tell the entire story – a footballer who embraced his career as a red (however short-lived it may have been) and lived through the drinking culture in English football.

Well, the escaping the drinking culture may have been a lesser feat than say, playing for Manchester United or professional football for that matter, Ritchie recently spoke to Stretty News’ Jonathan Shrager about his playing career, managers and a few tidy bits of information the general United supporter may have overlooked.

As his hands gently graze over his perfectly shined dome, Ritchie can easily remember growing up as an avid supporter of football in Manchester. A Mancunian born and bred, Ritchie remembered he was quite blessed to grace the grounds of The Cliff and Old Trafford, but it was not always sunshine for him.

“All my classmates and lads I knew were City fans,” recalled Ritchie with a laugh.

“My mother wouldn’t let me go to a football game on my own,” he continued.

“Right, we’ll you’re not coming anymore,” in regards to traveling with his mates to football matches during his youth.

When faced with the dilemma of either sitting at home whilst his mates went off to football matches, or travel in a pack to watch City – the choice was really quite simple.

And though Ritchie was stuck having to revert his time to City, he would take football in at any rate. He took his footballing hints growing up among blues in Manchester; a time where the Manchester derby was at its height in his mind.

Breaking into the professional ranks was even tougher than watching City play for Ritchie.

“There was no academy. You came out of school and were signed as a school boy at 15. I became a professional at 17,” an entire year before footballers normally were signed explained Ritchie.

Looking back at matches which Ritchie was involved in, one of his most memorable moments alongside Manchester United was when he was playing against the reds with Brighton. Though Brighton & Hove Albion ended up losing 4-1 on the afternoon, Ritchie did notch a goal. And he also ever-so kindly grabbed Joe Jordan from the back of the head whilst he was in on his hands and knees and shoved Jordan to ground. All in good run, right there Ritchie.

Dubbed the best player to ever grace Boundary Park, Andy Ritchie was a gritty footballer who earned every minute on the pitch. Now, standing in the distance with his hands on his head, he looks perplexed if a search of his name should be run on the internet. Whilst The Doc walked around The Cliff ripping into Ritchie during his Manchester United career, at the end of the day he understood the bickering and the shouts were always because the gaffer cared – and should the Manchester United manager remain silent, is when worries should have begun to creep in.

But with Andy Ritchie, he’d never have to worry about failing to give his all on the pitch. He knew quite quickly his time as a footballer was limited and to cherish the moments he had. Surely, Ritchie is confident upon his reflection back with his playing career with Manchester United, when asked about his years as a red, there is the unique twinkle in his eye that nearly every former red whether it be Juan Sebastian Veron or the now retired Ryan Giggs all displayed for the club. The Mancunian man, remembers the past as if it were a very vivid history lesson.