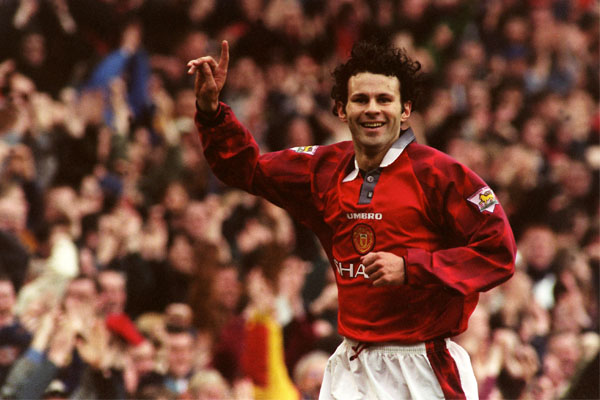 On the evening of the 25th February 2003 I sat in the TV room of a neurological unit, two weeks into a month-long hospital stay, chatting to another patient I’d befriended. James was a Mancunian who had been admitted a week before for tests and scans after he’d started having trouble with his sight and balance. He was a fellow United fan and we’d first got chatting and found common ground watching the League draw with Bolton the previous weekend, Solskjaer’s injury time equaliser rescuing what would be a valuable point. Regardless, United were dropping off the pace at the top of the Premiership, a Thierry Henry inspired Arsenal seemingly strolling to the title. The weekend before that the Gunners had also knocked the Reds out of the FA Cup, their 2-0 win at Old Trafford notable for the David Beckham boot to the face incident that occurred in the changing room post-match and for an astonishing miss by Ryan Giggs. A typical swerve of the body left David Seaman on his backside and the goal unguarded and at his mercy, but the Welshman somehow managed to scoop his right foot shot over the bar.

Giggs had received considerable criticism for weeks regarding his form and that miss only added fuel to the fire. Many fans felt that he had failed to develop and reach the potential that his astonishing, explosive teenage introduction to the English game had suggested he might. Throughout his career he had suffered with persistent muscle injuries and jibes about his crossing ability, but this felt more fundamental. At 29, he should have been at his peak and yet his form, in the eyes of many, was the poorest of his life in senior football. The previous summer there had been intense press speculation linking him with a huge money move to Inter Milan, and one or two Reds were even suggesting that it may have been better had we sold him. Had we seen the best of Giggs? James was adamant that we had not. “You’ll see.” I really wasn’t sure.

The reason James and I had met up again in the hospital TV room again that night was to watch United’s Champions League Second Group Stage game against Juventus in Turin, where a win would see qualification for the Quarter-Finals achieved with two games remaining. The home side were not quite the force they had been the previous time the two had met in the Stadio delle Alpi four years earlier, but it was still a great Bianconeri side containing heavyweights such as Nedved, Davids, Buffon, Thuram, Conte, Trezeguet, Ferrara and Montero. United, however, had beaten the Italians the previous week at Old Trafford, a rare bright spot in a difficult month. To the surprise of many, Sir Alex chose to field a line-up without Giggs or Ruud Van Nistelrooy, perhaps with the upcoming League Cup final against Liverpool in mind.

There was plenty to discuss as we watched the ITV intro and saw the surprising United team and yet it was difficult to prize a sentence from James, which in the circumstances wasn’t surprising. I hadn’t expected him to show at all. The night before (literally in the middle of the night) a senior neurologist had woken him, told him that he had an inoperable brain tumour and that he’d be dead within two weeks. James had spent the rest of the night at the nurses station sobbing. I, oblivious to this, went the following morning to check that he wanted to meet that night to watch the game. He vacantly said, “I don’t know. Maybe”. A couple of hours later his girlfriend explained what had happened. I hadn’t expected him to turn up that night so when he appeared and sat down I had no idea what to say. After an awkward few minutes I fell back on trusted ground for a bloke in the company of another bloke, whatever the circumstances, and started rabbiting about the footie, not expecting substantive answers and only getting dazed, one-word responses. The James who had been so animated about the Bolton game, who had jumped up growling when Solskjaer scored and had vigorously defended Giggs was, not surprisingly, gone.

The match started and within the first few minutes Diego Forlan sustained what looked like a serious injury. On came the much-maligned Giggs and what followed was perhaps one of the most memorable cameos in United’s modern history. Less than ten minutes after his introduction the Welshman collected Veron’s low pass across the box and slid the ball home to open the scoring. I celebrated in the muted fashion that my emotionally retarded man brain thought was suitable in the circumstances. James didn’t move, but turned to me and quietly said something along the lines of “see, I told you the lad is alright.” 25 minutes later Giggs collected a loose pass from Antonio Conte on the half-way line, dropped his shoulder and started to run. And run. And weave. And run. As so often was the case when he was in full flight, he made the other 21 players appear as if they were moving in slow motion. Surely someone must make a tackle? But they didn’t because they couldn’t get close. And this was Davids, Conte, Montero, Ferrara. Seconds later Giggs was in the box and sliding a finish with his swinger (the same with which he’d missed the open goal against Arsenal) into the far corner of the net, Gianluigi Buffon helpless and wide-eyed at what he had just witnessed. The man of the moment ran off to celebrate, pointing his thumbs over his shoulders at the name on the back of his shirt. As Giggs’ dribble had developed I’d started the strange, animalistic noises that we often involuntarily make when we see a moment of magic or drama on the football pitch and as the ball rolled home I forgot myself and the circumstances and jumped around the room. It took me a few moments to remember that I was supposed to be being understated and respectful and I turned to retake my seat, a tad embarrassed, only to see James on his feet, fists clenched, grinning and growling as well. From that moment on until we parted after the final whistle that brought a 3-0 win to a close it was as if nothing much had happened between then and the previous weekend. Giggs, he assured me, was back, even if he himself had to be replaced at half-time. Van Nistelrooy’s goal, United’s third, was celebrated with almost as much gusto as the second and James was nearly himself again, even if it was only for the duration of the match. I didn’t see him again for a couple of days until he and his girlfriend came to my bay to tell me and a couple of others he had met in hospital that he was going home to die. A few days later we were told by one of the nurses that he had passed away in his sleep. He was 38.

It seems fitting to tell that story in the week that Ryan Giggs finally retired at the age of 40, after 23 years of top-level football at United. It turned out that he most certainly wasn’t washed up in 2003, regaining his form and then reinventing himself as a less explosive but more thoughtful footballer, a class act wherever he was played and putting in match-defining performances well into his final season. I thought of the above when trying to recall the finest moments of his career. Most would say his incredible extra time winner in the ’99 cup semi-final against Arsenal, or maybe the remarkable strikes against Spurs, QPR or Liverpool early in his career. There are so many. But for me that performance and that second goal stand out for two reasons.

Firstly, it summed up his career, facing and overcoming criticism and claims that he was finished, injury prone or not the same player that he had promised to be as a teenager, over and over again. In the weeks that followed his forty minute destruction of Juventus he scored goals in vital games against United’s closest league rivals: at home to Liverpool, away at Newcastle and, most significantly, the equaliser against Arsenal at Highbury without which the title could not have been won that season. That was his eighth English title. Who could ever have imagined that there would be five more, thirteen in all? Every subsequent year there was conjecture over whether his body was failing him, but his mind and intelligence prolonged his career far longer than those of his peers. He finishes as the most decorated player in United’s history.

Secondly, the goal in Turin is memorable for me because it provides a reminder of a player with a gift and style so special that it allowed him to do things which could amaze and bring joy, if even for a short period, in the darkest of circumstances. Football as a whole enriches our lives, provides a distraction from the trials of life and brings us moments of raw pleasure, the memories of which we retain for a lifetime. Every so often we see players with magic in their boots, true genius, which makes us feel privileged to have witnessed them. We have been spoilt at United to see so many world-class players come and go. Were my grandkids ever to ask me about the players I remember and loved there will be eulogies for Cantona, Scholes, Robson, Van Nistelrooy, Keane and Schmeichel. But should they ask me the best I ever saw, unless someone magical comes along between now and then, I will name two: Cristiano Ronaldo and Ryan Giggs. And my favourite of the latter’s goals? That second in Italy. Pure Giggs and his twisted bloody party trick. A footballer made of stardust who could and did make a dying man smile.