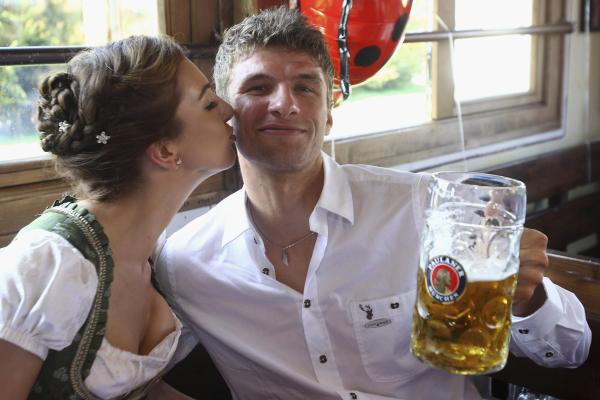 Louis van Gaal’s arrival at Old Trafford has immediately been met with transfer speculation. Some players he worked with at Bayern Munich especially, Barcelona and Holland have now all of a sudden peaked Manchester United’s transfer list.

Thomas Muller hit the headlines on Wednesday for speaking out about a special relationship Louis van Gaal and himself share. For instance, the 24-year-old was brought into Bayern’s first team by the Dutchman, who you could say helped kick-start his career.

“We have just won the domestic double and now I am looking forward to the World Cup. I have the feeling that I will play an important role at FC Bayern — and I 100 percent identify with the club and the people around the club. That’s a fact.

“I enjoy playing for Bayern — actually, there is nothing nicer.”

It is believed that van Gaal has already handed Ed Woodward a list of transfers to be done this summer before or after the World Cup. According to reports, that list consists of players such as Arturo Vidal, Arjen Robben, Mats Hummels, Toni Kroos and Luke Shaw. SN understands the latter is near completion already.

Some might say ‘you won’t attract talent of that class without Champions League football’ and they’re probably correct in saying that about most clubs. However, at Manchester United it is totally different. We have had a blip year that the new manager is adamant to transform in his first season. The stature of our club has not changed, people know we will be back and Louis van Gaal is a pull factor.

Ramon Isaac’s article on the Republik of Mancunia looks at some of the transfer rumours we have encountered since the football season ended. Isaac goes into detail about the likelihood of them joining and where they would fit in. Only Robben, Hummels and Sagna are mentioned. Yes, BACARY SAGNA…