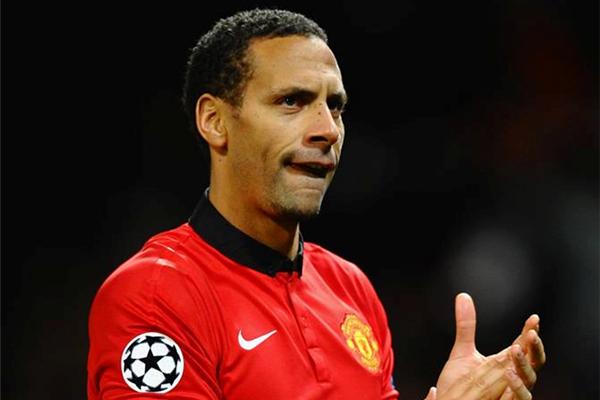 With Nemanja Vidic already gone, Ryan Giggs (as a player) almost certain to follow and with Patrice Evra hovering by the exit door, it’s been a few weeks of disappointment on the pitch at Old Trafford and inadequate goodbyes off it. All will depart without fanfare or the proper send-off that their service to the club as players and human beings deserves. The latest to be added to that group is Rio Ferdinand who, it was announced, will not be retained at the end of his contract. Possibly the greatest centre back the club has ever had, the reaction was not solely one of nostalgia. Ferdinand, like Wayne Rooney, has always been kept at arm’s length, appreciated and disliked in equal measure. It is a remarkable dynamic between some fans and a player who has made 455 appearances for United, winning 6 Premier League Titles, two League Cups, a Champions League and the World Club Cup. He has been integral to all of these successes and yet it is the negative events surrounding his time at the club and his flash, self-promoting image that have shaped the thinking of many. Like Wayne Rooney he is marmite, a working class lad come good, who has made some mistakes and lived a life many of us would love. Part jealousy, part deserved criticism, his career at Old Trafford has certainly never been boring. Regardless of our own individual opinions of the man, his exit from the club and the totally unprofessional way in which the news of his release was relayed to him should give us pause to reflect on whether he deserves the criticism he has received and, even if we conclude that he does, should it reflect so damningly on a man who has given us so much on the pitch?

Signed from an unravelling Leeds United for £30m in the summer of 2002, United knew what they were getting. Fresh from being the standout centre back at that year’s World Cup, Ferdinand arrived almost the finished article, a languid, technically gifted, elegant defender, clean in the tackle and a beautiful reader of a game. The day he signed, bedecked in white suit with bleached blond hair, it was clear that the attention-seeking showman came as part of the package. Perhaps it was that self-assurance which elevated him to the height of his potential and allowed him to perform at such an exalted level for so many years. Regardless, it meant that he was not to everyone’s taste and for a few, no amount of excellence on the field or charity work off it would assuage their deep suspicion of the man. Fans demand standards of behaviour from players that most could or would not adhere to themselves and this has very much been the case with Rio.

Throughout his career at United certain events have blighted his relationship with some supporters. In 2003, after forgetting to undertake a routine drug test after training, Ferdinand was banned for eight months for “failure or refusal” to do so. He had returned immediately after hearing from the club that he had forgotten and submitted to a hair follicle test, which demonstrated his innocence, but was punished regardless under the regulation’s strict liability. Some feel that the suspension was too harsh, whilst others were less forgiving, not least those Reds who had already taken a dislike to his brash manner and flashy lifestyle. Further criticism would follow when, during protracted contract negotiations, Ferdinand was allegedly witnessed in a restaurant with then Chelsea head honcho Peter Kenyon. The notorious “Men in Black” appeared at his house and to his credit the player spoke to them about the situation face to face. More recent criticism has resulted from the player’s outside interests: his ‘5’ brand of caps, music and publishing enterprises, TV appearances and other investments of time and money, plus his very public self-promotion on social media. The basis of the dissent has always been that Ferdinand could not be totally focused on his football or United, more interested in his own personal image and fortune.

And yet, until recent seasons, as his back and legs began to fail him, Ferdinand’s performances on the pitch rarely declined with any regularity or for sustained periods. His centre back partnership with Nemanja Vidic is possibly the greatest of the modern era and, before the arrival of the Serb, it was Rio who had to carry a number of fellow defenders who could not come close to his own standard of performance. He and Vidic created the perfect partnership, with brain and brawn, technique and no-nonsense defending, reading of a game and bravery, intelligent positioning and last-ditch lunges, hardly a scratch and broken noses. The two were polar opposites and yet combined to perfection. Alone they were greats, together legendary, the foundations which underpinned the most successful period in United’s history. Our gratitude should know no bounds.

And yet few are sad to see either Ferdinand or Vidic go. A large part of that revolves around declining performances as their bodies have slowly failed them, but there is more to it than that. Ferdinand has become the figurehead of the player unrest during David Moyes’ fateful season at Old Trafford in the imaginations of many supporters. He is known to have reacted with anger when instructed to learn lessons from a tape of Phil Jagielka and social media messages have made it clear that all was far from well in the camp. He was also suspected (including by this writer) of being the source of the team line-up leaks to the Daily Mirror’s David McDonnell mid-season, although it has since been suggested that the culprit was a different, younger England international. Regardless, it was an enlightening episode in that it showed how easy we all are to think badly of Ferdinand. To many fans his dissent was seen as disruptive and unprofessional, but when it became clear that Ryan Giggs had turned against the new manager as early as October many lauded the Welshman for fighting for the retention of the ‘United Way’ and for attempting to maintain the standards that Sir Alex had spent 1/4 of a century putting in place. Giggs, a man who cheated on his wife with his sister-in-law, can do no wrong. Ferdinand, for all of his charity work and positive contribution to team spirit in the dressing room over the years, can do little right. Patrice Evra (another alleged to have had an extra-marital affair) is equally bombastic, a joker who plays a similar role in training, but one who has also been party to a number of behind-the-scenes fall outs this season.

Perhaps if Ferdinand had had a strong season much of the vitriol that is fired in his direction would have been directed elsewhere, probably at Wayne Rooney or Ashley Young. But it was a wretched campaign for most, particularly Rio, and the feeling that a huge clear-out and a process of renewal is necessary means that many are pleased to see him and a number of his teammates go. Vidic and Giggs at least had muted send-offs at Old Trafford, although these were a million miles away from the reverent, triumphant hysteria that marked Sir Alex Ferguson’s final home game. Ferdinand did not even get a low-key goodbye, allegedly told of his fate in the changing room after the draw against Southampton. Ed Woodward is reported to have delivered the news in front of appalled teammates. Right decision, wrong setting in which to convey it, a further demonstration that the executive arm of the club remains a shambles. The player, in his own statement about the coming to an end of his 12-year association with the club, highlighted his regret at not being able to say goodbye. It is a shame, because whatever you thought about the man or his recent performances, the service he has given the club for 12 years has been exceptional. Patrice Evra is lauded and adored by most for his personality, high-jinks and for saying the right things, giving an impression that he truly ‘gets’ United. Ferdinand was equally bombastic, another important figure in maintaining dressing room morale and an individual who has always spoken of his pride at playing for United, showing due reverence to the history of the club. In addition, in recent years, the latter’s performances have been far better prior to this season than the Frenchman’s, another who also has outside business interests. And yet one is revered, the other, by some, despised. Where double standards by fans are concerned only Wayne Rooney invokes more. It is a shame. For all of his faults Rio Ferdinand has been a truly great player for Manchester United, the likes of whom, in his position, we may never see again. He deserved a proper send-off and the respect of the supporters that many never felt they could offer. Rich, talented, devoted to United, flawed and a bit of a div. I’m 3 out of 5. How about you?