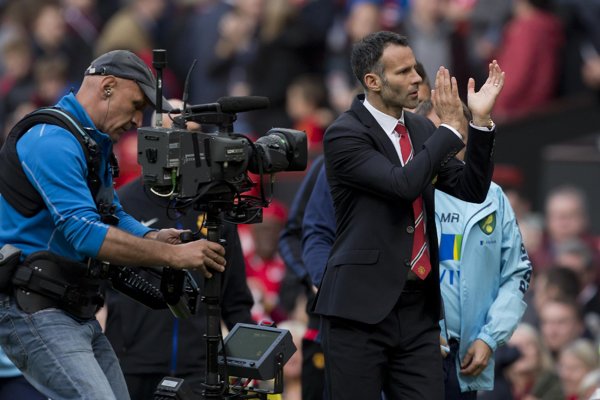 “Britain! Britain! Britain!” As the Tom Baker narration would say, a land where racists are rehabilitated into our loving hearts and given awards without even offering an apology and rational thought can be suspended without anybody batting an eyelid.

“Giggsy is the man for the job.” Several Manchester United players and an increasing number of fans and hacks have cried after 1 football match on a beautiful sunny afternoon in Manchester. Where the rays of sunshine ended the brief period of post-Ferguson darkness and heralded the promise of a better tomorrow. As writer John Nicholson pointed out in his excellent piece on Football 365 this week, it is an assessment based on nothing more on the fact that our Ryan looked rather dashing in a suit and managed to talk better than his haphazard puritanical predecessor, “David the Unready.” Even with the hindsight of a lacklustre defeat to Sunderland – a team who have pulled the most incredible of home straight surges – the clamour for Giggs remains.

Not just Giggs by the way, Alan Shearer in his mercifully short newspaper column (yes apparently he gets paid to write as well as bore us with the spoken word) suggested Steve Bruce. I’ll leave that one with you.

This is what 10 months of David Moyes at Manchester United has done to us; it has taken us to a romanticism that drives beyond the roads of rational thought, something Manchester United had managed to hold onto far longer than many other clubs in the go-go Sky Sports, 24 hour circus. Don’t get me wrong, my respect for Giggs the player and Manchester United stalwart is unwavering considering his achievements, he’s won more than most football clubs, provided moments of brilliance and remained at United when he would have been well within his rights to go and prove himself elsewhere. He didn’t want to though, he was smart enough to know he had a great setup at Old Trafford and you knew if he ever left the club as a player it would be into retirement.

Giggs as our next permanent manager though? No chance. That would be a decision not far off Liverpool bringing back the fossilized remains of Kenny Dalglish before being rescued by Rodgers or Newcastle appointing hometown hero and infamous boring buffoon, Alan Shearer. Neither of those moves worked out well, the latter ended up relegated as reality hit them with the crushing force of a Mike Tyson uppercut from the late 1980’s. Even the normally level headed Gary Neville has decided to abandon all common sense by demanding United appoint a British manager to maintain certain “traditions” and that Giggs should be given time to bed into the job full-time.

What “traditions” are these Gary? The tradition of being xenophobic in the face of all evidence and proven observation I expect.

With jingoistic tubthumping like that Gary Neville could take the place of disgraced, former Tory MP, Neil Hamilton as the UKIP campaign manager. It is astonishing narrow mindedness that for some reason is still allowed in English football without a hint of criticism. It got Tim Sherwood a job despite all evidence pointing towards the man was an arrogant idiot of staggering proportions.  – What sensible manager picks Bentaleb? It was the same mentality that gave Moyes a relatively easy ride with the media and many fans which a foreign manager would never have got.

Andre Villas-Boas didn’t get as long at Chelsea and he was sacked before the year was out at Spurs, despite doing a better job than Moyes. However, the media gleefully tore into the far younger, Portuguese coach with infamous gutter hack, Ian McGarry even describing him as “borderline Aspergers” in one of the worst attacks on his character. Indeed it was an insult which managed to be as stupid on as many levels as it was plain disgusting. Those insults were clearly reserved for the single reason that at Spurs, Villas Boas had the temerity to replace the English Harry Redknapp at Spurs.

Football reflects the society it operates in more often than not and recently football has been doing that, with UKIP romping up the polls and swivel-eyed, loon Nigel Farage appearing on our televisions several hundred times a day. Giggs is being mooted as a rival to Van Gaal for the primary reason that he’s British just as Moyes was mooted as the right man for the job when he succeeded Ferguson. Neither man has the qualifications for the job but seeing as they are British, the old sense of imperial superiority comes through and they must be automatically better than those suspicious foreign chaps.

Van Gaal is the favourite for the United job for the obvious reason that he’s very successful, despite some ignorantly suggesting otherwise.

Mad? Quite possibly. None of this changes the fact Van Gaal is exactly the man United need right now. He’s experienced, smart and has a footballing philosophy which fits with the ethos of the football club. Giggs maybe be the man in the future but right now he isn’t and as for any other British managers none of them are good enough. That isn’t Louis Van Gaal’s fault and nor is it Manchester United’s, it is the fault of the English system that it fails to produce coaches that live in the 21st century.

That’s the real reason nobody wants to 100% embrace Van Gaal just like we don’t embrace immigrants and throw our lot in with conmen and hypocrites like Nigel Farage and his posh National Front. Embracing the exotic foreigner is an admission that our ways don’t work anymore and maybe we’re just too lazy to evolve and throwing around the phrases “homegrown” and “tradition” won’t change any of that.

The empire has gone, Scotland is about to leave the Union and the England football team haven’t won a trophy in nearly 50 years. Can we move on now?