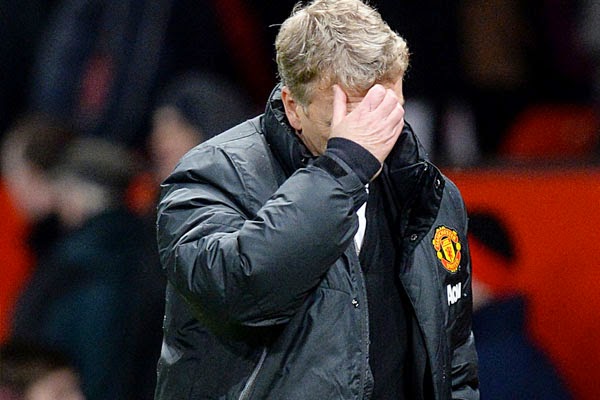 Unless Manchester United’s horrid owners complete a remarkable Westminster style u-turn then David Moyes was always going to be done at the club. By the time you read this it is very likely it will already have been announced and he’ll be clearing out his stuff including the iPads in the bunker, the dossiers on his own club and Phil Neville, a man who I love as a player but reminds me eerily of the Bradley Walsh character Dave Dodds. For those of you who don’t know Dodds was the assistant in Mike Bassett England Manager who used to parrot everything his manager said.

*This article was wrote before the announcement was confirmed*

Moyes has become a punchline to every joke possible. He had become a parody of a bad manager, everything he could say and do wrong he did. Indeed I wouldn’t be surprised if 6 months after his departure it turned out he was the world’s greatest gonzo journalist releasing the book “The Damned United II: Full Throttle” or naming it, in memory of the great gonzo journalist Hunter S. Thompson, “Fear and Self-Loathing in Manc Vegas” A film adaptation would see Brad Pitt play the part of Moyes seeing as he has made a career of being solid but out of his depth in a demanding role.

As the title implies I’ve felt this season had an air of the hell made marriage of Leeds United and Brian Clough when he fell out with all the senior players before being forced out. Still at least Moyes got more than 44 days and the support of his predecessor. However it was not enough, so where did it go beyond the pale? Everyone will pinpoint the moment they think Moyes passed the point of no-return: Liverpool, Olympiakos or City cantering to victory in Old Trafford while in pipe and slippers form.

For me that point was just a few hours before a disappointingly routine defeat to Everton when a story broke that hometown favourite and the romantics choice Danny Welbeck wanted to leave. Apart from being a talented academy graduate Welbeck is a “mad, mad United Fan” (Joe Hart). For many United fans, that was baffling and infuriating all in one go. Welbeck doesn’t seem the standard English footballer primadonna type without the delusions of grandeur, to force him out seemed to show a manager who had lost the faith completely of his squad. Not only that but this story leaking out just gave off the whiff of a man who lost control, even in the context of our world of relentless, gossip sniffing bloodhound 24 hour news media.

All bar one player of course, which for me is another key moment in this B-Movie of a season. That player is Wayne Rooney and the moment Moyes decided he was going to pander to him and cave in to all his demands was the moment he ceded authority. Sure managers have to be a little more flexible in the modern world of ludicrously, over-rewarded, man children but the line which separates the boss from the players should remain and the best managers right now successfully walk that line. I still insist Rooney should have been sold in the summer, even if it was to Chelsea. His best years are behind him, he is not captain material and he is not good enough to neither lead the line nor be a creative midfielder. One would love to see how his amateurish attitude to his lifestyle and personal development would go down with Van Gaal. Better yet, Rooney attempting to dictate to Van Gaal what his best position is, only one winner would come of that and it wouldn’t be the rotund Scouser.

It would be unfair to single out Rooney for his babyish behaviour considering he at least made an effort at times this season when many of his teammates did not. Senior players particularly deserve hellish criticism for constantly undermining Moyes whenever they were given a chance. They would do well not to feel so smug and blasé right about now, every manager around will have seen how little effort many of them produced this season and Moyes’ replacement will not want to be insulted by the lackadaisical effort of his own players. Chief offenders were Ferdinand, Evra, Vidic and Van Persie and that attitude filtered down to the younger players, hence the cringe worthy but hilarious drunken exploits of Chris Smalling and the disillusionment of Danny Welbeck.

As for the manner this departure has been handled, it only confirms my notion that the Glazers are terrible owners. Bad enough they botched the succession but to brief the press behind Moyes’ back about sacking him before even telling him should be enough to make anyone with a conscience ill. They truly lived up the description of “Uncle Malc” by one Florida judge as a “snake in sheep’s clothing.” Moyes deserves to be sacked for his performance but is a decent man who deserves to at least be allowed to leave with some portion of dignity rather than be subjected to public humiliation from his own boss. While the decision to replace Moyes is correct the manner in which the hierarchy conducts itself only convinced me to continue in my self-imposed exile from Old Trafford.

With Van Gaal now touting himself for the job, as he has been for months, the hierarchy at Manchester United have a very easy decision to make, he’s not my first choice but he’s the right choice right now. Surely not even David Gill’s successor and Glazer stooge Ed ‘Gil Gunderson’ Woodward could get this one wrong?