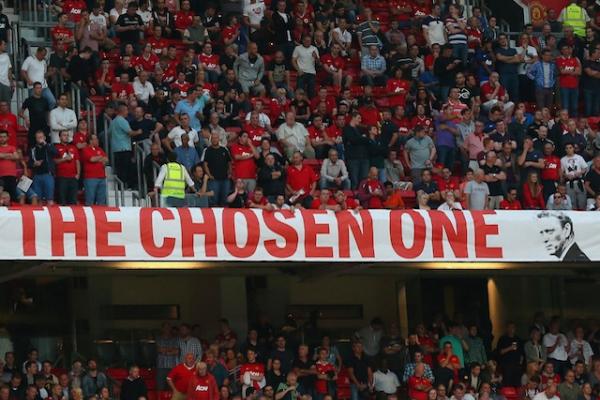 The infamous ‘Chosen One’ banner has been taken down from the Stretford End at long last.

Stretford End Flags (SEF) had received negative press over the flag being put up without any real vote from fans that had to look at it all season. The idea would have been fine if they took it down after the Chelsea game in August, using the banner as a dig at Jose Mourinho, but keeping it up was a mistake and made us look a bit of a laughing stock.

However, the banner has been removed ahead of Saturday’s clash with Norwich.

#MoyesGone: ‘The Chosen One’ banner has been taken down at Old Trafford. (via @victoriamscott) #MUFC pic.twitter.com/qCtGB6IOjp

Speaking to MEN, Andrew Kilduff aka Tufty explained that SEF will consider donating the flag to the National Football Museum in Manchester or could be sold to charity.

He said: “It’s something we’re going to think about carefully. We may offer to the National Football Museum or auction it off for charity.

“It got a lot of coverage. But there are no regrets about it. Old Trafford is filled with symbolism so there is no hiding place for a manager.”