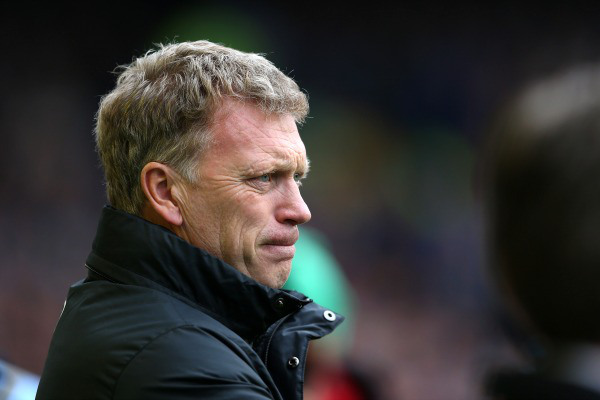 22nd April 2014. Manchester United beat Aston Villa 3-0 to secure their 20th league title in style. Rumours were already rife that Cristiano Ronaldo may return to the club in the summer under Sir Alex Ferguson and the raw talents of Phil Jones, Chris Smalling, Rafael, David De Gea and co were improving all the time.

One year on and all has changed. Ronaldo didn’t come, Sir Alex Ferguson dropped his retirement bombshell and his replacement David Moyes has been sacked despite having a six-year contract. Manchester United would have loved to give Moyes those six years but results have got worse, performances have continued to drop against the top teams and it appears the boss has now lost the dressing room.

I’ve been a big defender of Moyes, I knew this season would be tough. Not this tough but I definitely didn’t rule out the possibility of United finishing outside the top four. The problems for Moyes come directly from the dressing room and the apparent lack of players he had onside by the end of his 10 months in charge. Rumours emerged over the weekend that lifelong Manchester United fan Danny Welbeck is also considering his future at the club due to lack of opportunities up front. A weak excuse considering he’s played more up top this season than ever before. If Moyes was driving a die-hard red to wanting to leave then his position finally become untenable.

We all know player power is rife in football. Wayne Rooney has talked his way into two bumper new contracts but it is disappointing to see how many players seem to have turned their back on Moyes and whoever the new manager is it’s clear there are many who appear not to have the right attitude to be a Manchester United player any more. I understand it has been difficult for them to work with someone who has achieved little in terms of silverware after playing under the greatest manager in United’s history but at the end of the day, Moyes was their boss and undoubtedly several have let him down or just downright disrespected their boss. Football is a unique world separate to normal life but if you disrespected your boss at the bank or the corner shop you’d be handed your P45 before you knew what had hit you.

It’s difficult to nail down names but the leaking of information to journalists about line-ups, usually involving Rio Ferdinand related news doesn’t speak too well of the experienced defender who may well have already played his last game for United unless Moyes leaves before the end of the season. Nemanja Vidic’s head has been in Italy for a while whilst Rafael has let his performances drop considerably this season. Danny Welbeck, Tom Cleverley and Ashley Young were caught clubbing in Manchester shortly after returning from United’s Champions League exit to Bayern Munich. Perhaps insignificant to many but it’s certainly not something you’d have seen under Sir Alex Ferguson, same goes for some of the antics Chris Smalling has got up to this year.

Javier Hernandez has taken to Instagram on several occasions to drop hints about his unhappiness but some do seem to have seen sense and at least tried to be supportive of the manager, even if deep inside they’re not. Juan Mata has spoken recently about his belief in Moyes, Wayne Rooney is firmly behind the manager whilst whatever their opinions may be, the likes of David De Gea, Michael Carrick, Jonny Evans, Antonio Valencia and others have remained largely quiet on the current goings on at Old Trafford.

Sadly, this is the way it is now. Players do dictate what they say or don’t say, they’re not going to get sacked, top clubs won’t sack their stars, they’ll get a pitiful fine and a slap across the wrist at worst but it shows that some players don’t have the stomach for a fight or simply won’t put the effort in for a manager unless he’s a world class one or an angry Scotsman who strikes the fear of God into them.

That theory culminated in a pathetic performance at Goodison Park on Easter Sunday. The passing was precise, tidy and easy on the eye but the lack of effort, commitment and heart was clear to see. Wayne Rooney tried, gesturing that he had nobody to pass to; Juan Mata simply had nobody making any sort of moves whilst Nani looked like he’d prefer the ground to swallow him up as he consistently lost the ball and backed out of any 50/50 challenge. Everton were first to every ball, they broke with pace and as we’ve seen on several occasions this season, the opposition simply wanted it more than any United player on the pitch.

Wayne Rooney has strangely come in for a lot of criticism lately. Undoubtedly he’s been poor recently and we know he struggles to find form immediately after a spell on the sidelines. The sad thing is the hatred seems to be stemming from the fact he’s one of the few friends David Moyes had left at Old Trafford. Wayne Rooney has scored 214 goals for United, he’s never been a saint, he’s been quite the t**t for large parts of the last few seasons but at the end of the day, Rooney is our t**t and we’d be much lower than 7th had he gone to Chelsea last summer. For all his faults he tries, he defends, he tackles, he runs, he tries anything he can to help his team succeed. He’s drained Manchester United of more money than I like to think about but on the pitch it’s clear he’s one of the few who really hates what is happening to the club, his celebrations after Michael Carrick’s goal at home to Fulham and at full-time against Olympiakos showed that Rooney’s head is firmly at Old Trafford and whatever people think of him, he will go down as one of Manchester United’s greatest ever player. It will come as no surprise to anyone if he bows out at Old Trafford as the top goal scorer in the clubs history.

The hatred directed towards Rooney and his performance at Goodison says a lot about how United fans feel about the player, a lot of it did seem to stem from the fact Moyes would have kept him on no matter what and the fact he made him captain upon his return to Everton. Rooney will be here next season but it appears it’s going to be a sad end to Moyes’s short reign over Old Trafford, a thoroughly decent man, someone who tried his best but as it turned out wasn’t the right man to rebuild Manchester United post-Alex Ferguson. I personally hope Moyes goes elsewhere, repairs his reputation and becomes the solid, respected and successful manager he became at Everton. What’s sad is seeing ‘fans’ on Twitter revel in his demise, drinking to his failure and partying at his dismissal. The job was forced upon Moyes, he was clearly overwhelmed from the start, let down by his new Chief Executive last summer and by some of his players throughout the season.

Undoubtedly, the majority of the blame for some of the inept performances lay firmly at the ex-Everton manager’s door but bad luck here and there hasn’t helped him. Six points were dropped in the final seconds in games against Fulham, Southampton and Cardiff. David De Gea’s only blunder of the season cost him the chance of leading out the reds at Wembley whilst a series of wasted chances condemned him to defeat against his old club at Old Trafford last year. Things had got slightly better, the injury to Robin van Persie enabled Moyes to give more chances to Shinji Kagawa and Javier Hernandez and all of a sudden United looked more potent up front, there was an instant connected between Kagawa and Juan Mata whilst Hernandez looked more comfortable will top class creative footballers behind him.
Even our performances against Bayern Munich were nothing to be ashamed of but once again another false dawn was put to bed against Everton at the weekend and this time it appears it is a false dawn too many for Moyes. Champions League qualification is officially out of reach and with four games to go the club look set to miss out on Europa League qualification too. The dressing room is a cold place to be, the elder statesmen of the club have let their manager down and will probably still leave in the summer but there’s no hiding away from the fact the likes of Antonio Valencia, Ashley Young, Tom Cleverley and co will never be good enough to be regular Manchester United players.

Whether it’s David Moyes, Jurgen Klopp or Barbara the tea lady, Manchester United needs rebuilding, not just as a team but as a football club. We’re still yet to employ a continental manager and it would be a surprise to most if that trend continued beyond this summer, the club appear disconnected from the fans, a money-churning corporation stuck in its own success and an ex-manager who was allowed to make a sentimental decision upon retirement to choose someone cut from the Sir Alex Ferguson ilk.

United need a fresh start, they did last summer too. The success continued to flow but in several ways the club was being left behind by its rivals. There’s a reason Robin van Persie and Phil Neville both chose to send their sons to Manchester City’s academy. Serious money needs investing in all four corners of Manchester United, on the pitch, off the pitch and a real commitment to making our club great again. Certainly players who would have left under Moyes’s tenure need to leave anyway and be replaced by world class talent or at least potential world class talent.

The last thing we need now are idiots like Rio Ferdinand blabbing all over Twitter or Javier Hernandez posting his best gloating, smiley face on Instagram. It won’t do any good, we need to move on and concentrate on our future.

Don’t hate David Moyes. He didn’t come to your house and defecate on your sofa, he tried his best at a football club that was simply too big for his personality from the start. In time he may have grown into his role but it appears we’ll now never know how far Moyes could have taken Manchester United. Let’s admit our errors, let a very good football manager go with our best wishes and hope the hierarchy at Old Trafford see that all is not well at Manchester United and employ the right man to oversee the next few years of Manchester United’s history.

By Richard Laverty, Editor-in-Chief of 92 Magazine.