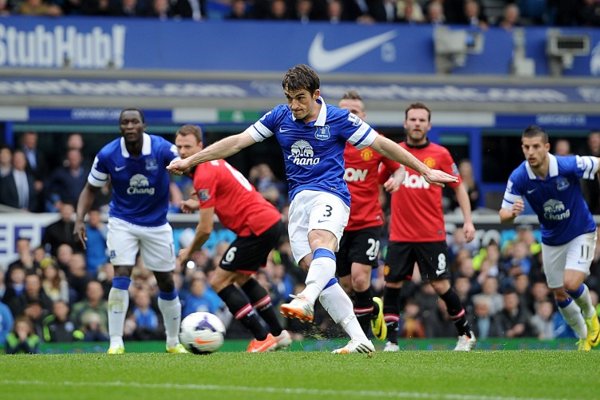 David De Gea – Probably the only player who can hold his head high, and not for the first time this season either. Blameless for either goal and ensured the scoreline did not become even messier. 7 MOTM

Chris Smalling – His awkwardness on the ball and on the whole as a right-back is there for all to see. Constantly gave the ball away and missed a glorious chance to get back in the game, heading wide from close in. 4

Phil Jones – Brainlessly handled a Lukaku shot that De Gea surely had covered, to allow Baines to open the scoring. Allowed MIrallas to run through whilst playing a costly offside trap. 4

Jonny Evans – Welcome return from injury and was our best defender. Substituted after an hour or so, clearly lacking match sharpness. 6

Alexander Buttner – Had the chance to build on an impressive outing in the home leg against Bayern, but was run ragged by Mirallas. Was also to blame for their 2nd goal, not stepping up with the others. Remains to be seen if he is a long-term alternative to Patrice Evra. 4

Michael Carrick – His sub-par season continued at Goodison. Outrun by Everton’s three in midfield and was often sloppy in possession. Very underwhelming. 4

Darren Fletcher – Put out Everton fires and was generally tidy in possession but still didn’t give us any tempo or intensity in feeding the creative players. 6

Nani – The less said the better. Playing for his future in a way, his theatrics, rustiness and lack of invention meant he was a passenger. Rightly substituted. His bags already look packed. 3

Shinji Kagawa – Didn’t carry on his good form at Everton. Tried to be neat and intricate but never found the killer ball. 5

Juan Mata – Bad day at the office. Similar to Kagawa, his craft and guile never led to anything dangerous. 5

Wayne Rooney – Always off-colour at his old stomping ground. Missed two great chances to score and nothing came off for him. 5

Antonio Valencia – Shifted to right-back, when surely an injection of pace would have been better served further forward. Minimal impact. 5

Chicharito – Provided liveliness and energy but didn’t get the service. 5

Danny Welbeck – Rumours he’s discontent at a lack of game time surfaced pre-match. His pace would have allowed us to stretch Everton, but he was only a sub and had little time to make a difference. 5