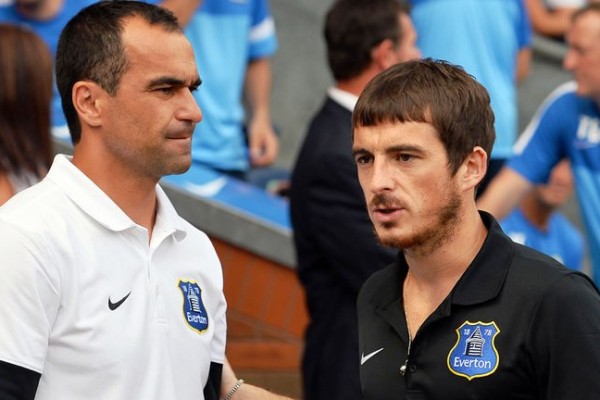 For Baines to make the step up to the next level, play Champions League football and usurp Ashley Cole as England’s first choice left-back, it was apparently essential that he followed the Scot through the doors at Old Trafford.

However, following a string of derisory bids in what was a catastrophic summer on the transfer front, Baines remained at Everton and has subsequently reaped the rewards and earned a bumper new contract in the process.

He will say the decision to stay has been vindicated given the respective positions of Everton and United. Now, after rejecting United’s advances, he has given David Moyes the cold shoulder again, in what was a subtle dig at his former boss whilst heaping the praise on Moyes’ successor Roberto Martinez, who has certainly taken Everton to new heights this season.

Giving an interview in the Guardian, Baines compared both managers,

“The two managers are totally different, in every way,” he explains. “They both have things they are really good at but with the current manager, he’s ultra-positive. He takes the positive from every single scenario.

“That’s been the big thing for me: the difference in the style of play, committing to that and not feeling like we have to adapt to the opposition. The new manager has that confidence and belief in himself, in his own blueprint. And then in us. He tells us we’re not going to change, we’re just going to improve constantly and keep practicing until we get to the level where we want to be. Stick to it, don’t compromise, get better at it”

This is a pretty damning summation of Moyes’ management style from a player he has an undoubted rapport with. Baines’ thoughts strike a chord with anyone who has taken in Moyes’ United this season- a seldom positive press conference, turgid and dour football, in stark contrast to that of Martinez.

Upon Moyes’ departure, Evertonians were thankful for his contributions spanning over a decade, right now they are probably thankful they got a fresh face and with it a fresh approach. The tide has turned as such.

One thing that will surely miff our support is Baines’ quip about ‘adapting to the opposition’. It certainly does not sound like the archetypal strategy of a United manager, nor arguably have we seen a ‘blueprint’ as Baines points out.

For Moyes’ sake, it is essential that we have encouraging signs from these final 5 games, if he is to last til the summer, when he will apparently have a transfer war-chest to revamp the squad.