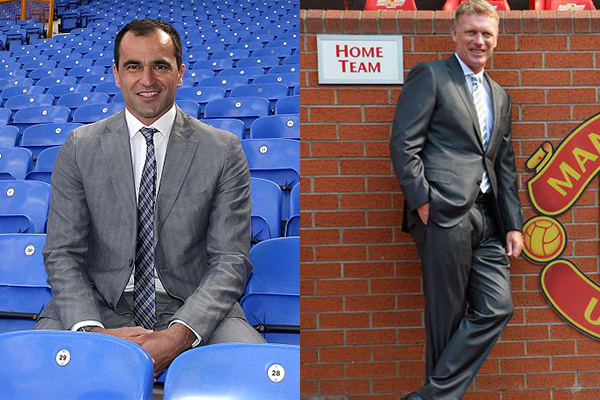 Today David Moyes will return to his old stomping ground for the first time since replacing Sir Alex Ferguson as Manchester United manager. Rewind to last June, when Moyes walked through the door at the Theatre of Dreams and Roberto Martinez was given the responsibility of replacing him at Goodison Park, you would have been deemed a loony if you had predicted that Martinez would transform Everton’s fortunes and leapfrog the 20 times champions of England. But that then improbability has become reality in a matter of months.

Inevitably in the press conference, Moyes was quizzed about his Goodison return and asked to reflect on his Everton tenure:

“I know the players – they are a great group of lads and great professionals who got on with the job and were self-motivated. Over the years, we continued to add players there and it was a great group of young players.”

“The senior group there is very important too. Roberto has done a brilliant job this year, he’s got them playing well and in a good, healthy league position. First of all, the game is not about me, it’s about Everton and Manchester United on the day. I go there as manager of Manchester United and I’m delighted to be that. I was proud to be manager of Everton at that time but my job now is to make sure I get a result for Manchester United.

‘He’s got them playing well’… Moyes is right, but after landing missiles on our £27M act of charity’s forehead for a couple of seasons, it’s not saying much that Martinez has given Everton an aesthetically pleasing brand of football that has seen a 37 point swing between Sunday’s opponents from this time last season to the current day. This strikingly captures the transformation in the blue corner and the stagnation in the red.

Everton will be psyched, as they always are, when we visit Merseyside, but more so with Moyes prowling the opposition technical area for the first time. However, he let his appreciation known for their supporters and thanked them for their backing during his reign,

“The fans were always terrific in my time there, very supportive and always right behind the team. We had some really big games there at times and they’ll be supporting the team like the Manchester United supporters have for their team. We go there with a great away record and go there trying to keep that going.”

As has been par for the course since Moyes’ arrival at Old Trafford, there has been a lot of ‘trying’ and ‘hoping’ to get the right result. This turn of phrase, which has had the majority of United fans cringing on a weekly basis, gives off the impression that we have been looking for excuses and relying on Lady Luck before a ball has been kicked.

You will notice more ‘trying’ when Moyes was asked about our chances of finishing in the top 4 (are you derisively scoffing too?),

“We have said we’ll never give in and we won’t until we just can’t do that. Obviously it’s nearly mathematically impossible but we’re still trying to make it happen if we can. It’s a tough game going to Goodison for any team at any time, as I should know, but we go there with a good away record and will try to make that work again.”

Moyes has never been one to engage in the managerial mind-games, however he could have cranked up the heat on Everton a little, who could well be feeling the pressure of a Champions League push. This was in evidence midweek, Crystal Palace, albeit on the crest of a wave, went to Goodison and became only the second side to win there all season by having a go. We have the best away form in the Premier League this season, despite all our travails, publicly acknowledging the potential difficulty of the fixture, no matter if it’s true, tells opponents that our fear factor has gone as has our all-conquering aura instilled in the Ferguson days.

As far as the team news in concerned, Wayne Rooney, Jonny Evans and ex-Everton midfielder Fellaini have all been declared fit to play, but Rafael and Robin Van Persie remain absent.