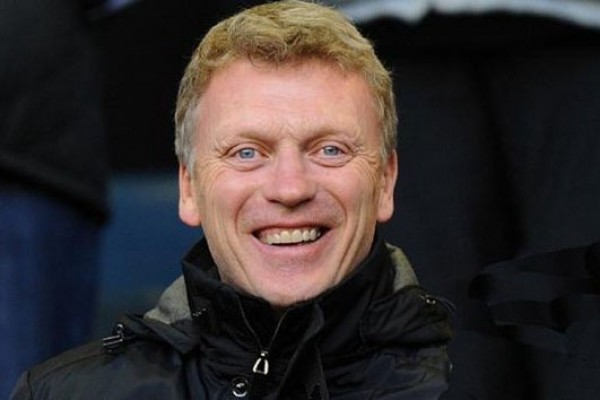 It is a game which now feels as though it has little significance for United fans, but the trip to Goodison Park to face Everton is one of huge importance for David Moyes. His return to the club where he spent 10 solid, consistent if unspectacular years will put the spotlight on the contrasting fortunes of his former team and his current one following his move to United last summer. The last 9 months have seen a 35 point swing in favour of the Toffees, a side which Moyes regularly implied to fans was at the peak of its potential, and new manager Roberto Martinez has implemented a passing game which has left the club’s fans purring. From a distant 6th place last season Everton now find themselves with a chance of Champions League qualification, their results achieved with a wage-bill approximately 1/4 to 1/3 of the size of those carried by the clubs immediately above and below them. By contrast, Moyes has overseen a dramatic decline at Old Trafford, the reigning League champions sitting 7th, with a wage-bill which now outstrips all but City’s, having spent nearly £70m on new recruits, including the remarkable and so far dubious £27.5m signing of Marouane Fellaini from his former club. The pressure is firmly on Moyes and defeat at Goodison would be a tremendous blow, both to his pride and his chances of remaining in his job this summer. This one match, more than any other, exposes the incredible change in fortunes of both clubs, the catalyst for both the same factor: Moyes’ move to United.

In the circumstances a win at Goodison would be a significant achievement. Everton have a record of 12 wins, 3 draws and 2 defeats in 17 home games this season, including victories over Chelsea and Arsenal. Only a late equaliser denied them a win over current League leaders Liverpool. United, by contrast, have won only once against a side in the top 8, picking up just 6 points against teams above them in the League all season. Not only will Moyes have to overcome a strong opponent, he also has to do so with a squad of players for whom the match will hold far less significance than it does for their manager. A Champions League place is now long gone, qualification for the dreaded Europa League tour of European backwaters offers little incentive to excel and many of the squad will understandably be looking forward to this wretched season ending and the World Cup in Brazil. None of those likely to be involved this summer will want to get injured in the remaining five games. Many of the remainder will, quite naturally, be yearning for a long holiday and to put a horrible 9 months behind them. A number, including Nemanja Vidic, have their minds on pastures new, whilst a significant proportion of the squad have little idea who their manager will be next season should they stay and whether Moyes or a replacement will even want to retain them. This is a demoralised and disjointed group. On top of all of that United will face Everton without arguably their best two players, Wayne Rooney and Robin Van Persie.

Everton, prior to their Wednesday night defeat to Crystal Palace were flying, confidence surging through the veins of a squad committed to their manager, his philosophy and his vision. This weeks home defeat may have shaken that belief but they are still on a run of 7 wins in 9 matches and prior to the Palace game had not lost at Goodison since the out-of-character defeat to Sunderland on Boxing Day. Their home has become more of a fortress than Old Trafford. Players and coaching staff seem to be lining up to unsubtly hint about how much more they are enjoying life under Martinez, his training, tactics and trust in them. Ross Barkley is being used as a stick to beat Moyes with, the young wonderkid who was, some claim, rarely trusted or utilised. Champions League qualification is no longer in Everton’s hands and realistically they will need to beat United to keep pace with Arsenal. Goodison will be rocking and Martinez’s side will be the most highly motivated of opponents. The dice are, it appears, loaded.

We therefore find ourselves in the odd situation where a match that means little to United fans or, you’d imagine, to a number of the players, could be absolutely critical for the future of David Moyes. Further reports have appeared this week suggesting that the suits at Old Trafford have been sounding out potential replacements in the event that they decide the incumbent has to go. Given the financial loss already incurred as a result of this dismal season they would have every right to wonder if the manager is the right man to move forward with a squad which looks certain to be bolstered by a number of expensive recruits. Recent stories reporting that huge money deals are almost in place for William Carvalho and Luke Shaw suggest, if true, that the Glazer family and Ed Woodward are not messing about this summer, looking to complete transfers early and pay what it takes to avoid a repeat of last year’s farcical July/August window. Those linked are players that any manager would be delighted to have and recruitment appears to be based on giving whoever the manager is next season the best tools possible to improve immediately and build long term.

Moyes is, despite some of the unfortunate things that he says, not stupid. He knows his job is on the line. When questioned about his future after the defeat in Munich he was far from bullish, suggesting that the continuation of his tenure at United was a question for the owners or Ed Woodward. This contrasts with his previously vehement belief that he was trusted, had a 6 year contract and would be in the job long term, building a new team in his image. His reluctance to comment further suggests strongly that the wind has changed within the corridors of power. This dynamic, added to the personal significance of this weekend’s match for Moyes and the potential for defeat to heap further humiliation upon him, means that he travels to Goodison under huge pressure to inspire and coach his team to a positive result. It sounds like a recipe for disaster, but he does have a few aces up his sleeve. Robin Van Persie’s injury has prompted him to move Juan Mata to a Number 10 role. The Spaniard is on the fringes of the Spanish World Cup squad and was excluded from the last internationals. In that role he has revelled, most recently at St. James’ Park where he tormented Newcastle, scored two and assisted Adnan Januzaj’s goal with an inspired back heel. Whether Moyes has made the change due to necessity or free will, he now has a hugely gifted, in-form player with the biggest incentive of all, the chance to play at a World Cup, as motivation. And Mata is not entirely alone in needing to shine.

Javier Hernandez has been a bit-part player this season, a situation which is clearly making him extremely unhappy. His lack of action and poor form has put his starting place for Mexico in Brazil in doubt and he needs matches and goals to demonstrate his worth to national team coach Miguel Herrera. Shinji Kagawa is another with every reason to want to continue the form that he has recently shown on the left of a trio of attacking midfielders. Another player rarely trusted by Moyes until recent weeks, he is playing for his future at Manchester United. Over the last two seasons he has rarely sparkled but he and Mata appear to have suddenly clicked and at times produced some sumptuous football. It was the Japanese player’s introduction at half-time in the home Champions League game with Bayern which inspired United’s second half surge, his touch and movement no doubt reminding the Germans of the player who tore through the Bundesliga during his time at Borussia Dortmund. Newspaper reports suggest that Moyes is looking to sell Kagawa, but a continuation of his current form would prompt any manager to think twice. As Jürgen Klopp recounted after selling him in the summer of 2012, Manchester United was his dream and he will be keen for his love affair to coninue past the summer. Throw in the impudence and ambition of Adnan Januzaj and Danny Welbeck’s desire to prove to Roy Hodgson that he merits a starting role in the England team and the manager has a small group of players with everything to prove and all the motivation needed to give their all at Goodison. His hope will be that the rest play without pressure or nerves and enjoy the chance to perform with little personally to lose.

David Moyes returns to Everton this weekend with the weight of the world on his shoulders, his future hanging in the balance and facing an opponent whose upward trajectory contrasts painfully with his and United’s downhill spiral. The home side have been largely formidable at Goodison and are chasing a Champions League place. Moyes has to pick from a depleted, divided and, in some cases, demoralised and disaffected squad, many of whom will already have their minds on the beach or the exit door. He does, however, have a small core of in-form, motivated players in whom he must put his faith on Sunday if United are to emerge victorious. Regardless of Everton’s Palace defeat, in the circumstances a win at Goodison would be a significant achievement, one that will be deserving of praise. Lose and the knives will most certainly be out within the press and fan-base. There will be no hiding from the 12 point gap between the clubs or the drastic change in fortunes experienced by both, directly causally linked to his move to Old Trafford and the succession of Roberto Martinez at Goodison Park. To overcome that pressure and take 3 points would be notable. A defeat would lay his calamitous reign bare. If ever a match was set up to define Moyes’ season it is this one and walking out at Goodison and guiding his team through the 90 minutes will be the biggest test of the manager’s ability and character to date. He can salvage some bragging rights, a modicum of pride and begin to rebuild his reputation or sink to a new humiliating low. For him this is the big one and he knows it.