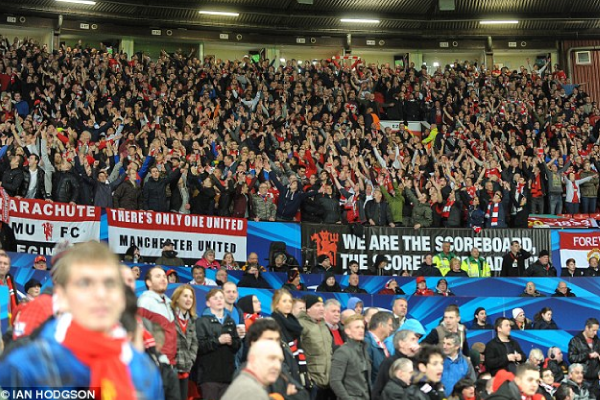 I don’t sit in the J Stand. I’m at the opposite end of the ground where we’ve enjoyed a terrific atmosphere this season. Whatever troubles have occurred on the pitch, fans have been willing to roll their sleeves up and get involved.

This is why there was so much anger from fans at the use of a plane to show United’s support up and embarrass the club. The outpouring of support for David Moyes that followed may have been through slightly gritted teeth but it was still there all the same.

Last week, season ticket holders in J Stand were told they must make way for a new Singing Section from the start of next season. These are season ticket holders who have perhaps been in those seats for as long as they’ve been watching United at Old Trafford. Now they have been moved on the back of two trials of an idea that was meant to improve atmosphere but instead has divided support.

Earlier this year, a mate wrote on Twitter that he’d been moved for the Fulham game so Singing Section could be trialled once more. I responded sympathetically. However moments later the Stretford End Flags account (who had not even been mentioned) were questioning whether I’d like to see the atmosphere at Old Trafford improved or not and that if I was that vocal in my views then surely I’d want to apply to sit in ‘the section’.

Of course I’d love to see an improved atmosphere at Old Trafford. I doubt there is any match goer who would say different. But at the expense of supporters who have been there for years? Not a chance. The argument is that somewhere in Old Trafford, season ticket holders would have to move in order to make room for such a section. Then such an idea can’t happen. As nice as it might seem to be to create an area of the ground where the away support is replicated at home, if it turfs out fellow reds it cannot happen.

If we can’t even look after our own loyal fan base on issues such as these then it is a depressing time. The issue of the noise generated at home games is always a factor it seems. In recent years, every defeat could be joined with the phrase ‘and the crowd were shit’ as an add on. Other teams home support is afforded praise with whenever we come away cries of ‘why can’t we generate that type of atmosphere’. It’s their cup final, of course they’re going to be noisy.

But then I don’t believe that there is that type of noise at any ground nowadays. Football and its supporters are changing. We can all stand in a singing section and hammer out ‘kicking a blue’ but how many of us actually have?

I’m not going to start hurling abuse at those who have been labelled as behind this singing section movement. What I will say is that the type of language used to effectively dismiss those who could be moved to make way for the section has at times been sickening. The ‘someone’s got to move’ argument is not a counter argument and is spouted back as if it were a school kid shrugging their shoulders petulantly.

The singing section idea may have been through numerous meetings and consultation with fan groups, blogs like this one has leant support to the idea, but this is not quite as simple as putting a group together to sing more. It’s like living on an estate for years and having to walk to a pub 15 minutes away. You sign a petition for a pub to be built on your estate. You argue at how it would improve things. Then you get a letter through the door to say they’re knocking your house down to make way for it. “Hold the fuck on?” Then the situation completely changes.

Why wouldn’t I want to be a part of section? I go to the games with my old man. I have done since 1992.  I enjoy watching the games with him and in truth, we really enjoy the atmosphere in the Stretford End. Where we are, there is almost a mini community of fans who have been there since Tier 2 was finished (we’d had to leave the Family Stand). It makes nights more special when you feel you’re amongst friends even though you have a bond that is only shared for a couple of hours every other week. That’s Tier 2 in the Stretford End since 2001. Now imagine the bonds that are in place amongst the rows of seats in J stand who have been there a hell of a lot longer.

Noise levels and numbers of followers for the Singing Section. The voice that should be heard amongst everyone is that of the fans who have been the most loyal. There is an unwritten code about respecting reds who have been there and seen it. Whilst many of us shit ourselves at the thought of a Liverpool triumph, Reds such as those in J Stand had to endure years of them winning it. We can talk about City’s last minute winner a couple of years back as the worst ever. Those who were in tears on the pitch when Law scored against United would most likely suggest otherwise.

There is more to support than how loud you sing. Support should be a unity of people of all ages and backgrounds fighting for one cause. At a time when our support is needed more than it has been for many years, I fear the in-fighting will see those who have fought hard to ignore the urge to give their tickets up finally relent and say enough is enough. If that happens, a piece of our history will evaporate from the ground.

A Singing Section that increases the atmosphere but decreases the number of reds who are so often needed to remind others that there have been worse times than the 2013/14 campaign could be a failure to match the efforts on the pitch during this woeful season.

One response to “The Singing Section should improve atmosphere, not divide support”