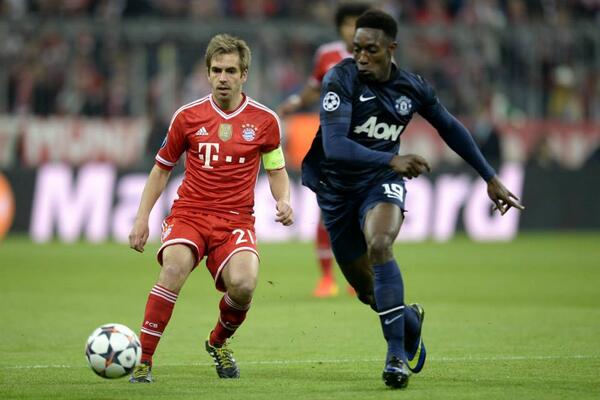 First, a confession. I didn’t see the Bayern v United second leg. Having family, who I haven’t seen for over a decade, visiting from Australia and only in the country for 24 hours left me out of excuses. In the end I’m both envious of those who were able to watch, for those atavistic seconds after Evra’s goal, and feel fortunate that I didn’t have to watch the subsequent collapse. I’ve seen brief highlights, the chances and the soft goals conceded. Post-match I listened to the radio and looked on social media and the dominant view was that United set up well, contained Bayern, got the goal, but then the team collectively switched off and collapsed. Few blamed the manager, minor gripes being Moyes’ decision to play a patently unfit Wayne Rooney for 90 minutes and his reactions to changes that Guardiola made. But, even with these in mind it would be harsh to attribute too much blame to him given the spirit and application which United displayed over the two legs against a great side, remaining firmly in the tie until the latter stages of the second game. It appeared that some players simply lost focus after scoring and all belief after Bayern levelled.

And yet there was great anger from fans over various media platforms after the game, aimed not at Moyes’ management of the team in the Bayern tie, but for the overall mess in which we now find ourselves. The cause was not the mishandling of last night’s game but the realisation, after an entirely expected and perfectly respectable performance and defeat, that this is the last we will see United in the competition for at least 16 months. For all of its commercialism and hype, the Champions League is the greatest club competition in the world. These are the spectacles that we truly crave, that give us a buzz like no other and which lead down a road towards moments like Barcelona and Moscow, for some amongst the greatest nights of their lives. It has been almost a given in the last two decades that we would have a shot at the biggest prize in club football. We usually came up short (who doesn’t?) but there have been some great occasions and performances along the way, matches to tell the grandchildren about. These are memories that will endure long past a league win at Arsenal or Chelsea. The League is our bread and butter, the Champions League a filthily lush chocolate cake waiting for you when you’ve finished the former. And suddenly the chocolate cake isn’t there anymore and we have no idea when or if it will return.

Call it entitlement or being spoilt. Maybe it is both. But the Champions League needs United and we need the Champions League. And we should be in it, with the squad and resources we possess. This is the competition that we dream about and those dreams have evaporated in dramatic and unexpected fashion. We knew the end was coming last night, but still the realisation hit us harder than many imagined. That is the last we will see of Nemanja Vidic in a United shirt in the competition, probably Patrice Evra and Ryan Giggs too. They will leave under a dark cloud. It won’t be the farewell that we imagined at all. What awaits next season is either a tiring, thankless traipse around the fringes of Europe in the God-awful Europa League or twelve months of money-making friendlies or blank weeks watching from afar as our domestic rivals, sides we should be challenging and joining on the biggest stage, compete for the cup with the big ears. It will be like watching the ex-girlfriend you still love getting married to a bloke you despise.

When we reflect on the season we should not forget, as those so angry last night have not, the reasons why this has happened. An ill-judged aerial fly-by, the ballsy first-leg performance against Bayern and wins over desperately poor Villa and Newcastle sides appear to have distracted many away from the fact that this season, now effectively over but for a series of meaningless 90 minute run outs to go through the motions in, has been an unmitigated disaster. In some ways, the scoring last night mirrored the pattern of 2013/14, a chink of light, something better to come, before calamity and/or a return to mediocrity. One small step forward, then three steps back. If, at the start of June, fans had been told that in two transfer windows none of the glaring holes in the squad would be addressed despite a spend of nearly £70m, that United would finish 6th or 7th in the Premier League, would make the Champions League ¼ finals but would go out of the FA Cup in the 3rd round at home to Swansea and the Carling Cup over two legs to Sunderland, they would have responded that you were mad. A squad that finished 11 points clear at the top of the League last season, with circa £70m of talent added and the emergence of one of the most exciting young talents in European football? That level of decline simply would not be possible, even with the loss of the greatest manager the game will ever see. Most would and do accept that Fergie overachieved with a less than vintage squad and that he left a club in need of investment. Few expected a title or fireworks, just competence, a top four finish and a fun cup run. There is more than enough at the club to have achieved that. The consensus back then would almost certainly have been that no manager could or should survive such a decline at one of the world’s biggest, richest clubs. It simply would not be tolerated elsewhere.

That is exactly where David Moyes has led us and yet it looks like, after all of the humiliation, “punches”, cringe-worthy press conferences and stone-aged tactics, he will survive to lower expectations and bumble along for another summer and early winter at the very least. Some fans have been persuaded by the incessant rhetoric about long-term plans and a deficient squad. Fergie, we are told, would have struggled with this lot. It is, in fact, everyone else’s fault that the standards that Sir Alex spent a quarter of a century instilling into the very fabric of the club have been wiped away. The purge is set to continue this summer as Moyes strives to exile anyone at the club linked too strongly to the previous, gloriously successful regime. It’s the players. We’ll sell them all. It’s the coaching staff. We’ll move them out too. And it appears that he will be given vast sums of money to bring in his own players this summer. Whether the best will come to play under Moyes without Champions League is another matter. The hope is that there is enough common sense in the corridors of power to only agree to purchase players that any manager would want, to provide a squad that any future coach can take over and get a tune out of. The fear is that purchases will be specific to Moyes’ desired system, that he is sacked mid-season, that no top coach is then available and a temporary or sub-standard successor is left with players they don’t want.

It is for this reason and the very real concern that good players who have been used badly by Moyes will leave to get away from him or be sold, that this should end now, when there is time to find a more accomplished successor who can make the most of the current squad players next season and buy his own men in the summer. He will not require the absurd period to “get to know his players”, act with timid conservatism in the transfer market, repeatedly put his foot in his mouth or have a plan for the club which only starts at some as yet unknown future date. He will not spend £27.5m on a Marouane Fellaini, lick Wayne Rooney’s feet clean after training and matches or play Juan Mata as an orthodox winger. The players will respect him and believe in his methods and CV. Some decent players now intent on leaving may change their minds. He will be positive about the aims of the club, will return expectation levels to the levels at which they should be and will advocate possession-based, attacking football. He will not be David Moyes.

One caller on the radio last night, asked to look forward to next season, sighed and said in a resigned tone, “I think he’ll be here next season now and we’ll maybe get back in to the top four, but I can’t see us achieving much more than that. We’ll have to get used to that now.” Somewhere during this wretched season we’ve become resigned to mediocrity, accepting it almost because we feel so privileged to have experienced what came before. It can’t last forever. That is not acceptable, not for this club. Success at the level Fergie provided for us will never be repeated, but Manchester United should always be competing at the top end of the table and always be qualifying for the European Cup in its current format. A plucky defeat against Bayern changes nothing in any assessment of this season. The fact that it signals the end of our participation in the Champions League finally rams home to fans the real consequences of Moyes’ tenure at the club and provides a vision of the future. Better players will always bring some upturn in results but it is hard to find evidence from the last eight months that this manager can lead us much further than our minimum standards of achievement.

A question: You pay a builder to carry out minor structural repairs on your beautiful home and build you an extension. Soon after completion you come home to find that the extension has collapsed and huge cracks have appeared in the walls and ceilings of your house. Would you re-employ and pay the same builder to rebuild the extension and repair the walls?

I’m going with no.