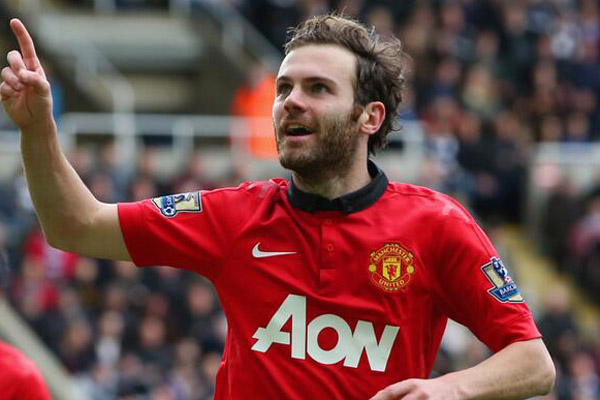 Following Saturday’s convincing and fantastic away victory at St James’ Park, inspired by our £37M Spaniard, the man himself took to his website, as is customary every Monday, to give his thoughts on the match in which he was at his dazzling best.

The victory and style of football was sensational to watch on the eye, and once Mata unlocked the door with a brilliantly executed free-kick, United turned from slow-starters to being in complete control and enabled us to play with freedom which our creative players Kagawa, Mata and Januzaj clearly relished.

“The truth is, after a game like Saturday’s, I realise once again how nice football can be, and how much you enjoy the few days following a victory and a good performance. I still have a smile on my face 🙂 To spend a relaxed Sunday knowing that you have done your job is priceless. And it was not an easy thing to do in St. James’ Park, but the team delivered and we got three more points to keep this great streak on away games”.

Despite some sections of the media criticising Mata for a supposed slow start to his United career, his 3 goals and 4 assists in 11 games with a pass completion rate of 89% to boot is well and truly eating into the £37M forked out in January, and the worrying thing for Premier League defences is he is only getting started. He is adapting every day to his new team-mates and is thriving in the absence of Robin Van Persie, enabling him to play in his niche number 10 role, where he wreaks most havoc.

Speaking of his rapport with the players, Mata added,

“I scored and enjoyed on the pitch again; I wish the streak goes on until the end of the season. As I said after the game, I have a very good understanding with my team-mates and I was also very happy with Chicha and Adnan’s goals”.

The opening goal, Mata’s deftly taken free-kick, clearly released the shackles after a testing opening to the game. Mata celebrated with his Spanish compatriot David De Gea, who was surprisingly omitted. His deputy, Anders Lindegaard, performed heroics, making three eye-catching saves from Papiss Cisse, the final of the three was nothing short of miraculous from point-blank range, a certain goal was prevented.

Mata went on to explain the embrace with De Gea,

“By the way, you may wonder about my celebration with De Gea… The reason is that we had been practicing free-kicks the day before and David said I was going to score against Newcastle… because that day I was misfiring all my shots! And so it happened :-)”

Mata looked like he was enjoying the chance to cause mayhem with Shinji Kagawa and Adnan Januzaj also flourishing in Newcastle. The composure and audacity not only for his second goal, but to also assist Januzaj’s class finish was outrageous. This was Mata’s best game in a red shirt by a distance on an unforgettable away day triumph.

Unfortunately, Juan cannot feature in Wednesday’s return leg in Munich and build on Saturday’s scintillating performance. It goes without saying that he will be missed, especially on a night when we need to score. The one positive is that he remains fresh for the remainder of our league campaign, and will have a prolonged rest so to speak, as our next league game will be the weekend after next, against Everton. A very difficult fixture on paper, given their transformation under Roberto Martinez.

Juan was the man on Saturday, it’s a sign of things to come.