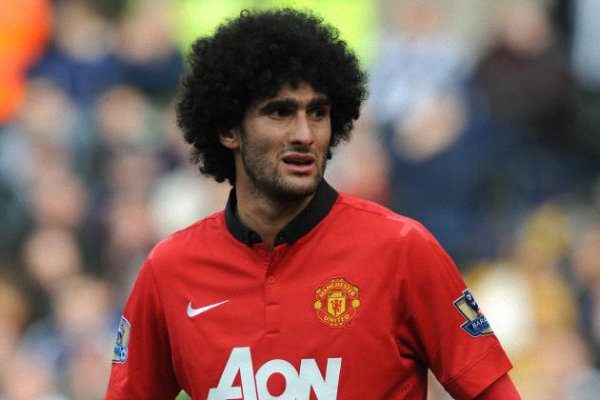 High farce is an ever more difficult creative concept to pull off in this era of “reality” TV and politically skewed news media and public schoolboy caricatures in government as real life so often parodies itself magnificently. One wonders whether the great comedic performers of the Golden Age of Hollywood or the magnificent Charlie Chaplin would have found work in these days of morons getting drunk on TV for money or Prime Ministers pretending to look serious on toyphones in the midst of an international crisis. Thankfully the Champions League (a cash bloated parody of the old European Cup) offered up a timeless piece of bumbling high farce with the quarter final appearance of anthropomorphic, 70’s disco wig, Marouane Fellaini.

Fellaini isn’t the first 21st century footballer to try and reinvent and reintroduce the concept of slapstick high farce into the beautiful game. Notorious own goal specialists Frank Sinclair and Richard Dunne gave it their best efforts. The former once scored an own goal from around 40 yards out and the latter single handed won United a Manchester derby…while wearing the colours of City in a delicious slapstick parody of ‘Typical City.’ More recently, Swansea City’s human-vulture hybrid, Jonjo Shelvey, produced a critically acclaimed one man comedy show in the 2-2 draw against former club Liverpool. Shelvey scored one and set up one for his team before setting up two goals for the opposition in what Shelvey described as a satire on the cavalier nature of modern banking (I may have made part of that up).

However none of these men have managed to integrate slapstick high farce back into mainstream culture as they lacked the grand stage and the sheer commitment to cultivating a timeless comedy appearance. The flailing arms, awkward gait, overwhelming masses of hair and the ever present possibility of falling over the ball before ceding it to the opposition was a tremendous source of mirth in an otherwise tense quarter final tie with Bayern Munich.

Fellaini has the air of a street fighting hobo who has somehow ended up in boxing world title match in Cesar’s Palace or an opponent of Rocky Marciano as it’s also known. He doesn’t seem to quite know what he’s doing there but he’s there by hook or crook. Maybe he looks exactly like a genuine top class midfielder that United were actually after and dares not say anything e.g. The Jewish Barber in The Great Dictator. Although one imagines the modern footballer is either incapable or banned by club PR men from making the impassioned, brilliantly emotive speech Chaplain makes in the film’s climax.

Match after match one felt you could have pasted Fellaini’s United’s career into shaky black and white pictures, replaced the sound with light hearted piano music and have a Fellaini pull over exaggerated facial expressions for every mistake with a title card saying “Uh-Oh I done it again!” His outings against City could be up there with Laurel and Hardy’s best work and this of course would all be followed by David Moyes getting hit in the face with a custard pie.

The true comedy of last night’s quarter final is that Fellaini’s gameplan of bumbling, high farce seemed to yield some success, not simply in that he actually lasted 90 minutes but in that for a time he flummoxed the Bayern defence with his bruising ham-fisted take on the classic Number 10. Bayern of course rose to the challenge with the almost as comedic and clumsy Jerome Boateng – The Harpo to Fellaini’s Groucho – and the foul-a-minute Javi Martinez who may as well have sported a villainous moustache and Fedora hat for large spells of the game.

Fellaini’s constant winning of headers, roughing up Bayern players and unintentional interceptions were the zenith of the retro, English anti-football. It was all part of the guerrilla war United were determined to wage on an opposition who were on different tactical level to them. However, Fellaini made sure not to disappoint us by constantly giving the ball away as if it was a gigantic grenade which had to be distanced to a safe blast radius, which was usually one of Bayern’s several midfield generals. It was a tactic that drew the blood pressure of many impartial observers – such as myself – to such a point that we could have resembled Tony Montana in a full rage. It all served to bring together Fellaini’s obvious artistic vision to bring the concept of high farce to the masses in the 21st century.

Fellaini is – to completely reverse my pre-season position in lieu of actually seeing him regularly – an awful footballer. He’s the non-footballer’s footballer, the Anti-Footballer, a man who is terrible on the ball and spoils and fouls as much as is humanly possible off it. At a price of £27 million he is constantly shown up in big games, he is a player that Victorian factory foreman Sam Allardyce would likely have on the teamsheet first to augment his most direct brand of football.

However in a season of crushing dullness and one of Liverpool fans becoming so unbearable we may have to emigrate, let’s show some appreciation for Marouane Fellaini, the £27 million pencil troll topper. He is not simply the albatross round our failing manager’s neck, he is not simply an overpriced anti-footballer; he is our bumbling high farce. He is the man who has brought one of the oldest comedy traditions back into contemporary culture. All hail to the afro; Marouane Fellaini, Manchester United’s very own Charles Spencer Chaplain.