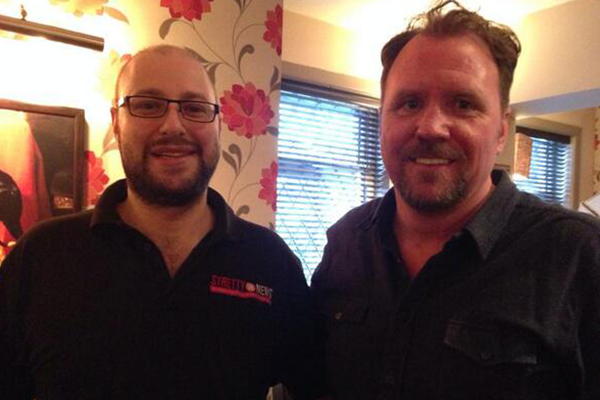 Scott and I share the same local, and have done for some years (read; decades.) My dad, a man who first attended Old Trafford in the 40s, informed me one day that Mr McGarvey had played for the Reds in the early 80s.

As becomes readily apparent during the interview, he’s an affable and popular bloke, always fraternising with the regulars at The Parkfield Inn, North Manchester. He often natters with my old man about all things United. I approached Scott regarding filming an interview for Stretty News TV, and he gladly obliged, underscoring the nature of the man.

Having read Andy Mitten’s “We’re The Famous Man Utd: Old Trafford In The 80s,” it’s an era that has always fascinated me. I was born in ’83, months prior to when Scott lifted the FA Cup with United, and my first trip to OT (at least that my father and I can recall) was in ’89. So by the time I was frequenting the “Theatre of Dreams,” or the “Stadium of Mudbaths,” as was more apt back then, Scott had long departed for pastures new and was plying his trade at Boundary Park, home to Oldham Athletic, several miles North of Old Trafford.

So, I arranged to meet Scott one late afternoon down “The Parkies,” as it’s known to those in the vicinity. Scott was already there, pint in hand. It was a Champions League Wednesday, so Scott had mentioned prior that he’d like to be home in time to watch the games. He’s still involved in the game as a football agent, so he’s constantly monitoring European football.

I’d originally requested half an hour of his time, but in total we sat filming for nigh on 2 hours. He might have anticipated a dull interview, but it appeared as though he enjoyed reminiscing on his days at United.

Furthermore we discussed some topical United matters, including Moyes, the current squad and prospective summer signings. The interview culminated in some questions tweeted in from SNTV subscribers, including a message from Big Norm Whiteside and prominent United songsmith Pete Boyle. Scott’s peerless perm was a recurrent theme, from Reds and Pompey fans alike. He took it all in good humour, and in his stride.

What ensued are 3 Parts imbued with intriguing insight into the club we all adore; informed opinion from a man inextricably linked with United, and a man who remains deeply involved in the beautiful game.

We wrapped up filming, headed to the bar, drank another pint, had a chat. He was equally content to chat United off-camera, despite the fact we’d just spent 2 hours doing so. He’s a football man. And he’s a refreshing throwback to an epoch when players socialised seamlessly with everyday folk in the pub.

And he’s a nice man. It had been a hectic week for me, I was tired and I was prepping for the interview last minute. On the first take of filming, I mistakenly introduced him as Scott Garvey. He interrupted to correct me, laughing all the while. Zero pretension.

I gave him Andy Mitten’s 80s book to take away and read. He might’ve even been referenced in the book by one of his teammates, but it’s a few years since I’ve read it myself.

I’ve not seen him since Wednesday. Chances are I’ll bump into him at the pub later this evening. In fact, he’s literally just texted me to let me know one of the regulars (and one of our mutual friends) is currently showing him the video on his phone. He’s old-school; he doesn’t have a smartphone, and he doesn’t “do Twitter,” as he informed me.