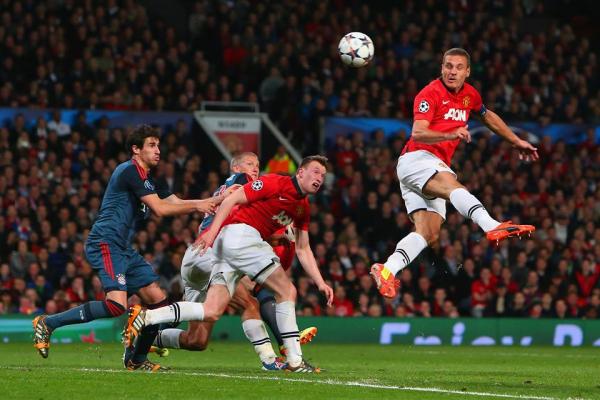 If I was asked to use three words to describe Manchester United’s 1-1 draw with Bayern Munich on Tuesday evening they would be, “I don’t understand”. The reasons for this choice are complex, but in terms of competence, tactics, spirit, passion and individual excellence it was a match so thoroughly out of place in a wretched season that it raises questions as to where on earth it came from. In that context this was a performance to enjoy and savour, restoring some pride and fun to a campaign devoid of both. These are the positives. But in the longer term it it felt like the endgame in a half decade of relative decline, a backs-to-the-wall performance at home against one of Europe’s giants, a club with which we have equal standing off the pitch but are so far apart on it that it was a pleasant surprise not to be humiliated. How did we get here?

First the “I don’t understand” of the Bayern game in the context of this season. It has been a campaign defined by ineptitude both off the field and on it, tactics and performances against competent sides and above exposing David Moyes’ team as being naive, one-dimensional, lacking in belief, drive and guidance. This has been particularly true at Old Trafford, a fortress that has become a house of straw, blown down by the slightest breeze. The Liverpool and City games were the nadir, matches against two despised rivals, both in competition for a League title which we in effect relinquished in January, both three-nil defeats in which United were comfortably outwitted tactically and were second best in terms of technique and desire. If the manager and players couldn’t raise themselves for these two games, then could they ever? The answer, it appears, is yes, for the second successive Champions League game.

In trying to explain more positive performances this season in Europe I have previously thought that foreign sides continue to give the club far more respect than domestic teams. They, after all, don’t watch United on a weekly basis and have walked onto the pitch facing a reputation and history rather than the eleven men standing in front of them. I still believe that this holds true. Bayer Leverkusen manager Sami Hyypia admitted as much after his side succumbed to naive 4-2 and 5-0 defeats. There is still enough quality at Old Trafford, irrespective of the identity of the manager, to give a good hiding to any team who leave themselves open defensively and pay us too much respect. This theory, however, cannot be used to explain the showing against Bayern. The Germans are European champions, had their own domestic league wrapped up in March and had already won at the Emirates against Arsenal this season and at the Etihad. Both were achieved in relative comfort. They have no reason to fear United, regardless of history and reputation. They have no reason to fear anybody. Bayern totally dominated possession and territory in the first half on Tuesday and yet the home side held firm and could have gone in to half-time ahead, had the pacey and powerful Danny Welbeck not had one effort harshly ruled out for a high foot and then fluffed a glorious one-on-one opportunity. For almost the first time this season United came out of the half-time interval invigorated and what followed was the antithesis of almost everything we have witnessed so far this season domestically. The tempo was better, the passion, technique, drive, determination, pace. Nemanja Vidic scored and the Germans were, for 8 minutes, rattled, before Schweinsteiger’s brilliant equaliser restored parity. But even then United didn’t fold and the outcome of the game remained in doubt until the final whistle.

So how do we explain the performance that had us on our seat edges, a posture we’ve experienced so little of this season? Were the German’s complacent, did they have an off-night or were United simply extremely sound defensively and clinical on the break? Unquestionably David Moyes got his tactics largely right, sitting deep, soaking up pressure and countering at pace. This, in itself, has been a rarity this season. But without the application of the players it would have made little difference. There were exceptional performances all over the pitch from the men in red: Vidic and Ferdinand were at the peak of their powers, Michael Carrick was more composed than he has been all season and Danny Welbeck led the line outstandingly. Perhaps the major turning point in the game was a change that was forced on Moyes, a labouring Ryan Giggs replaced on the left at half-time by Shinji Kagawa, for whom games such as these are, in theory, made. His Willo the Wisp like performance did little to dispel that assertion. Perhaps the most surprising aspect of the night was the showing of the much maligned Alex Buttner. It was a performance from the, ahem, limited Dutchman so out of keeping with the extent of his abilities and previous contributions that it rather encapsulated the whole night. This was everything we know about our team and players this season in reverse. The one exception to the rule was Marouane Fellaini who, in keeping with his performances in big matches for United, was abject in every aspect of his game. His touch, passing, pace and work rate were all sub-standard and it was he who allowed Bastian Schweinsteiger to drift off his shoulder in the box and equalise. His defending here, as with everything else he did all night, was half-paced and half-assed. It summed up his contribution that the 6 foot 4 inch midfielder won only one of the seven headers he contested. From being relatively positive about his arrival at United I can only now look at the slow-motion Belgian, consider the £27.5m fee and confess that I really don’t understand.

One wonders why this team performance and the Olympiacos display before it were so different. Was it the magnificent atmosphere, under the lights at Old Trafford that drove the players on, or were they self-motivating in a competition that remains their only hope of silverware and a route into the Champions League next season left? Either explanation has negative connotations, exposing either a lack of effort and application domestically by pretty much the whole squad or a chronic absence of the ability to motivate his players by the manager. The scale of the problem this season suggests the latter, but the players unquestionably need to take a long, hard look at themselves in the mirror. The Bayern game was perhaps the exception that proves the rule, the (almost) one-off revival that exposes the tactical paucity and lack of commitment and passion which has defined the season thus far. Where the hell has that been hiding since August? I don’t understand. After the pleasure and excitement of the ninety minutes wore off United fans could quite reasonably begin to ask quite where that verve and quality was the week before against City. I feel a little cheated and, despite his own major role in the downfall of last season’s champions, David Moyes has every right to feel a little cheated too.

And so to the bigger picture. Pre-match, some bookmakers were offering odds as long as 13/2 for United to win at home. European Champions as opponents or not, that is unprecedented. It was also probably about right for a team with significant injury problems, a limited manager and under-performing players. Quite how we have ended up in a position where expectations amongst fans, the media and punters is so low is hard to fathom. From almost the first minute every tackle, throw-in won, positive pass, tackle or clearance was cheered with gusto, as if the men in red were plucky, non-league underdogs facing Premier League giants. Despite all that has come before it and all that we know I still find this fall from grace difficult to fathom. How has it come to this? A draw with 26% possession at home is trumpeted in some quarters as a job well done, a success. I just don’t understand.

In the context of the season that has unfolded before their eyes this season, and taking into account the quality of the opposition, these responses were totally understandable. But for a club of United’s size to be taking on the role of the minnow at home against a club of similar stature, something has gone terribly wrong. It cannot simply be explained away by the use of the word “transition”. The seeds of this decline were unquestionably sown during the final few years of Sir Alex Ferguson’s quarter-century reign at Old Trafford, possibly as far back as the 2005 Glazer takeover, but certainly since the summer of 2009, when Ronaldo was sold and Tevez lost to City. Neither were replaced by players of anything like a similar quality. Fergie kept expectations artificially high by dragging a more pragmatic side to another Champions League final, but from there the decline in the standard of football, adventure and quality was pronounced. In his final three seasons United were twice losers in the Round of 16 and once eliminated in the Group Stage. Performances against stronger opponents became more and more like that which we saw on Tuesday, soaking up pressure and trying to break at speed. The odds started to tilt less in our favour.

And yet Manchester United went into their two-legged tie with Real Madrid last season top of the Premier League and with a realistic chance of defeating their equally illustrious opponents. We could and probably should have won in Madrid and, but for the ridiculous sending off of Nani at Old Trafford, were in with a shout of progressing at home. United fans knew that the Spaniards had some superior players but as a team there was still a feeling that this was a group with a realistic chance of pulling it off. Those last vestiges of perceived strength have been almost entirely wiped away by this wretched campaign and football far more pragmatic and less fluid even than Sir Alex’s final title winning team. We knew we had declined in recent years, but no one could have predicted the speed of the descent over the last few months. Over two legs against Bayern few expect qualification for the next round, most hoping simply that United give a good account of themselves and bow out with pride. As fans we all retain a glimmer of hope that something extraordinary could happen, but we know it is highly unlikely. As do the bookies. The disastrous summer, mistakes of the new manager and dramatic decline in player performances have left us completely exposed. Why it has happened can be traced back over several years, but the extent of it still amazes. In the end we were happy to come away with a 1-1 draw, a result which in the past would have left us a little frustrated and disappointed. The decline in expectations has been understandable, but dramatic.

The performance against Bayern was heart-warming, but also deeply puzzling, a night when both players and the manager lived up to their supposed potential, giving us something to purr about in a rotten season. A little pride has been restored to the team and its fans. But it was also an occasion which highlighted just how far from grace the club have fallen, a slow, slippery descent from 2009 which has become a fall at terminal velocity in the last eight months. Both the performance in the context of the season and the level of expectations in the context of United’s history were totally out of keeping with what came before and even an understanding of some of the factors at play doesn’t provide a satisfactory explanation. The performance was welcome, the rightly-lowered expectations of the United fans, not so much. As to why both have happened, I just don’t understand.