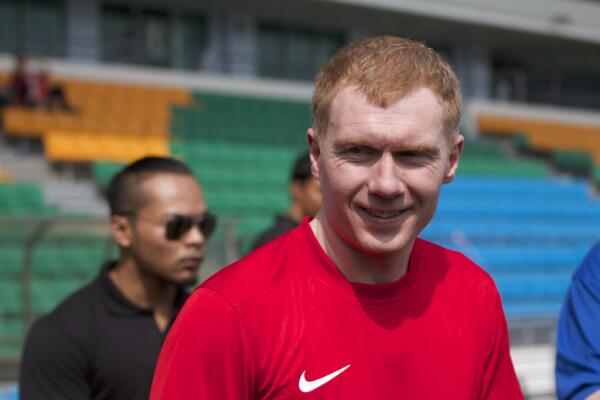 Incisive, entertaining, engaging, and intelligent with a powerful presence: these were all attributes displayed by Manchester United’s star man in their Orwellian dystopia of the Manchester derby. That man was Paul Scholes, bringing a warm glow or orange sunshine into a dull, cold, rain sodden night in Manchester. Scholes constantly cut through the nonsense surrounding the modern game in that dry, imitable, exclusively Mancunian style as he always has. Precision statements when analysing players, forthright views delivered with the hint of a smirk, possibly in the knowledge that he’d banished the two Jamie’s along with Redknapp’s disturbingly tight trousers to a shed in the back.  Such was the freshness and lack of cliché in his analysis even Souness was enamoured and delighted by The Paul Scholes Experience!

Such a shame it was then that the Ginger Prince’s evening saving contribution was limited to the Sky Sports punditry seat. His ghost loomed large while United’s current midfield was made to look about as mobile as the famed Easter Island statues by City’s effervescent and classy midfield – as a good friend of mine asked “Does Fellaini do anything but foul?!” Worse still was the defence, despite having two veteran, trophy laden internationals and the supposed future England captain, United’s defending was nothing but shambolic, City scored three, you knew if they needed to, they could have scored seven.

Last week, in my triumphant and glorious return (don’t laugh) to this website I wrote about how unbelievably depressing the film Being David Moyes would be, well it’s worse than any of us imagined. The embarrassments against City and Liverpool have taken us from British kitchen sink drama to a carnival of the grotesque, a Human Centipede or Antichrist, morbid, brutal and increasingly difficult to watch. Players have to take some of the blame too, but not all of them; the likes of Mata, Rafael, Jones, De Gea and Welbeck don’t strike me as the sulky, dishonest type more the professional, hard working, grateful type but even they have been infected by the disease of bang averageness David Moyes has brought to the club. Watching someone as good as Mata reduced to beyond a shadow of his former self is a sad sight, sadder still when you remember how much was paid to secure his services.

It isn’t simply a style of play that was wrecked the season it is the mentality. Being a part of an elite club, a modern day superclub if you will, like Manchester United requires a mentality only found in the minority, a minority that Scholes is in. It could be seen in his punditry alone; the blunt honesty, the steely gaze and the superior air which he used when describing Fellaini:

It made it a pretty withering put down when coupled with his dry, deadpan manner – although this only turned out to be a warm up for his cutting analysis of Arsenal.

The irony of his defence of Moyes was that Scholes’ driven, nerveless, unflinching personality is something Moyes lacks in spades. Every serious test Moyes has faced in his managerial career he has failed, FA Cup final, semi finals, Champions League qualifier and of course facing down the old enemy at Anfield. Coupled with that lack of success is a very limited, puritanical view of the game: Be workmanlike, stay in formation and stick to the plan…even if that plan fails repeatedly. Moyes’ comments before Liverpool built the opposition up as favourites, at Old Trafford! His comments after the derby spoke of “aspiring” to be like City. Moyes is the nearly man, the likable loser with the small club mentality which has proved to be too small for Everton in lieu of Martinez’s era of footballing enlightenment at Goodison.

Drink that thought in again, aspiring to be like City, it is a small club mentality at one of the biggest and most glamorous clubs which does nothing but insult the fans. United should only ever aspire to be United; Cavalier, entertaining, a little reckless and thoroughly without mercy for the opposition. Moyes is a decent, hard working man but has all the imagination and boldness of a UKIP candidate in an Oxfordshire bi-election and that is leagues away from what United need, which is ironic seeing as I suspect it is his Britishness that has saved him from the sack and a media hatchet job so far.

There would always be bumps in the road once Ferguson left United and that was all the more reason why the club needed an alpha personality, someone with bright ideas an electric presence and the steely will to support it.

United needed a Paul Scholes, unfortunately they got a David Moyes.